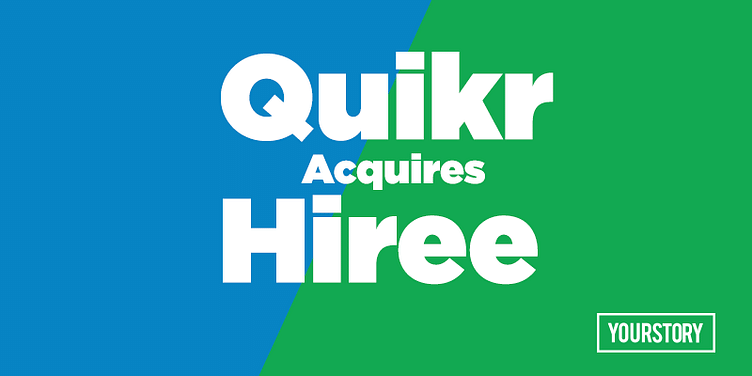 With the ongoing consolidations this year, another significant acquisition has been announced with Quikr acquiring Bengaluru-based job portal Hiree, which will be merged with its jobs vertical QuikrJobs and will operate out of Quikr HQ.

The synergy for Tiger Global-backed Quikr is obvious as the platform will make a larger talent pool available to recruiters for entry-level, blue collar and white collar lateral hires. The platform earlier provided only blue collar, grey collar and entry-level jobs across India.

Post-acquisition, the team and founders of Hiree will join Quikr.

“We launched QuikrJobs with an aim to bridge the gap between Bharat and India for the recruitment industry. We have created a successful business model there and it’s now time to level-up. Speed is in our DNA, and Hiree’s offerings aimed at shortening recruitment cycle times is a great match with that,” said Pranay Chulet, Founder and CEO, Quikr.

Founded by ex-employees of Yahoo, Manjunath Talwar and Abhijit Khasnis, the platform was previously known as Mynoticeperiod, which intended to increase the speed of the hiring process. The company had also launched an app for Android users.

Manjunath and Abhijit said, “Joining forces with Quikr allows us to double-up our focus on innovating in the recruitment space for both job seekers and our customers. Our customers will now gain the benefits of Hiree’s technology and the massive scale of Quikr in parallel.”

Hiree had received funding to the tune of Rs 20 crore from IDG Ventures and angels including Raghu Krishnananda, Shamsunder Talreja and Prashant Kirtane. On the other hand, Quikr raised $346 million from investors like Kinnevik, Warburg Pincus, Matrix Partners India, Norwest Venture Partners and Nokia Growth Partners.

In the months of February and April, the company had gone through rounds of layoffs.

The cross category classifieds business, with over 30 million unique users a month, currently operates businesses across C2C, cars, education, homes, jobs and services. The company has been making strategic investments as well as acquiring startups and strengthening its verticals.

Earlier this year, the firm acquired real estate portal CommonFloor for around $120 million. The acquisition helped in boosting its platform QuikrHomes, which was launched four months before the acquisition.

Furthermore, it also invested in A N Virtual Tech, which has detailed real-life imagery of 90 percent of the streets and buildings across India’s top 50 cities.

The recent most acquisition that the company had announced was that of Gurgaon-based home beauty services provider Salosa.

Among all the verticals, Quikr Jobs and its classifieds portal Quikr have been the most popular, and the latter is competing with OLX in this segment. On the job recruitment front, the company is facing competition from Naukri, Monster and LinkedIn, among others.

The number of consolidations has been soaring this year. The combined entities are strengthening their platforms and reaching out further to their consumers, thus taking the competition a notch higher. A few significant acquisitions this year include Oyo’s acquisition of Zo rooms, Yatra’s merger with TRTL and Microsoft’s acquisition of LinkedIn.