This IIM Calcutta alumna runs a school in her village and has educated over 1,000 children for free 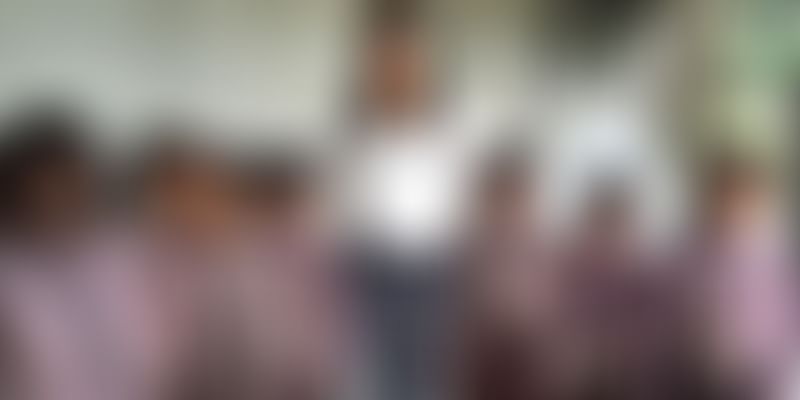 “It is much easier to concentrate on cities, which are touted as the growth engines of tomorrow’s India,” opines Pooja Mishra, a 36-year-old Indian Institute of Management Calcutta alumna and the founder of Gurukul Public School, a charitable English-medium school providing free education to rural underprivileged children.

She continues, “So what does it lead to? It leads to the government’s primary and secondary schools serving more as day care centres providing low quality meals during the day. And they only have one or two caretakers to look after the children who make merry in the dust, all the while unaware that their future is also turning to dust!”

Pooja says this was the very reason she started a charitable school in her native village of Purasi in Raebareli District in 2012. The school is in a low-income area where parents find it difficult to afford a fee of even Rs 100 a month.

Pooja, who stays in Lucknow, travels a daily distance of 80 km to reach her school. She opted out of the placement process to start Gurukul Public School with her personal savings in 2012 with only 23 children, and she is now the principal cum administrator. She happens to be one of the seven people selected from across the country for the Indian School Leadership Institute which trains the school leaders in collaboration with Knowledge Is Power Program (KIPP) Schools USA. But due to health reasons she gave up this opportunity as well. However, she continued to work towards building Gurukul Public School, which today has 1,000 students enrolled.Nonetheless, the road to bringing education to Purasi proved tougher than expected. She says “I had kept the fee as just Rs 50 a month, but the parents were finding it difficult to pay and even if they would pay, I realised that it was not possible to run a good school with such constraints.” While she expected the admissions to go up, she was finding it difficult to convince the villagers to send their children to school, especially during the harvest season when children helped out on the farms.

The project was on the verge of closure. Pooja says, “That’s when I thought of closing it but did not have the courage to tell this to my school children.” It was then that she reached out to her friends from the IIMC community. As support started pouring in, the journey continued and the school hasn’t looked back since.

Gurukul Public School has impacted more than 5,000 people so far, school children and their families included. The school takes care of the tuition fee and provides books, uniform, and stationery free of cost. The 1,000 sqft school also boasts a computer lab with eight computers and 20 laptops as well as a science lab. For the current batch of students, the school has 23 teachers, all of whom have B.Ed degrees. They proudly share that their students are now participating in debates and district level Taekwondo championships and are also securing district level academic rankings. This, they say, is real success for them.The school’s model not only makes quality education accessible to even the most underprivileged children but also opens their horizons to global opportunities through their mentors, all of whom are IIM and IIT graduates. Not only do these socially conscious and highly successful individuals sponsor their education, but also mentor their progress to ensure that they do not drop out of the school system.

Apart from funding received from generous sponsors, Gurukul Public School has also started an online fundraising campaign. This campaign was started by one of the regular supporters of the school, Sorabh Agarwal, again an IIM Kolkata alumnus. Sorabh says, “With more children joining in each year, the school needs new classrooms. The school is currently in need of six new classrooms and hopefully with the online campaign we would be able to raise funds for one new classroom to start with. We have raised Rs 95,000 so far. Hopefully we will reach our target of Rs 5 lakh in the next few days and make a new classroom for our children.”

The school is in the process of developing a model that can be replicated across India by the government and social entrepreneurs alike. The model depends on a mix of local talent, rigorous training, and standardised teaching practices augmented by use of technology. Pooja further adds, “By 2020, we will expand the current campus at Purasi village to accommodate 10,000 children and build it into a world-class model school. By 2025, we want to expand to other locations in UP in collaboration with the government and like-minded social entrepreneurs to further impact 1,00,000 children.”The school has already achieved its first milestone of enrolling 1,000 underprivileged children by 2015. As for Pooja Mishra, the journey has just begun.