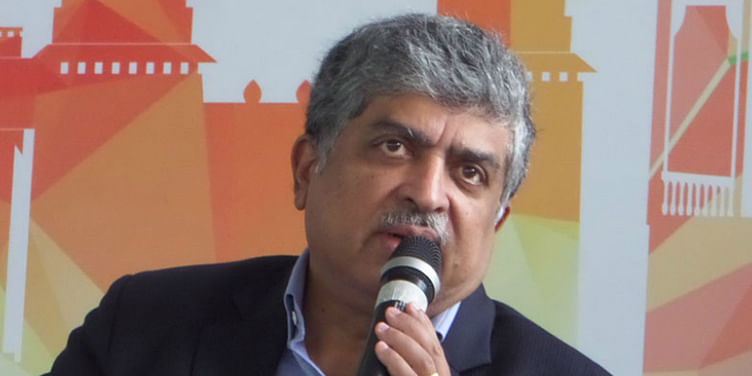 “China has over capacity in everything. China has the capacity to produce 823 million tonnes of steel while India is expected to produce 86 million tonnes of steel in 2016. Moreover, China is going to export coal and aluminum, so every metal and commodity is going to have major Chinese capacity,” says Nandan Nilekani, former UIDAI chairman and Co-founder of Infosys at an IIM Bangalore event on Saturday.

He further highlighted that China became a member of the World Trade Organisation in 2001 and had committed to becoming a market economy in 15 years, that is, by December 2016.

Accounting for around 50.3 percent of the world’s steel production in 2015, China globally ranked No.1 in producing steel. Economic modernisation, infrastructure, and manufacturing collectively attributed to the growth in production.

India’s GDP ratio has gone from 15 percent to 50 per cent. The country’s growth will be led by aggregation of small businesses,” said Nilekani.

He considers the 5.2 billion mobile users to be drivers of the Indian economy’s digitisation. This has happened because of the access to applications smartphones provide, as opposed to feature phones where mobile operators controlled access.

Nilekani blames Value Added Services (VAS), earlier controlled by the telecom industry, for restricting many from building big companies. SMS, MMS, and data access in mobile phones were primarily considered to be VAS, which in recent times has into core services. Today, the smartphone is seen as a huge generator of data, something the feature phone was incapable of. According to IAMAI, mobile internet users were expected to touch 371 million by June 2016.

On the payment digitisation front, Nilekani emphasised on the potential of the GST service tax network which has been built with the objective of GST execution by providing both government and tax payers with IT infrastructure and services. Every tax payer in this country can file income tax returns through this network which is likely to process around five billion invoices per month.

“The other piece of infrastructure is the electronic tolling system which is done by the government and is getting rolled out; it will put an electronic radio frequency identification (RFID) tag in every vehicle which can be used for automatic toll deduction. Since the ID of a vehicle is linked to an account, I can do congestion pricing all across the country,” said Nilekani. Electronic toll collection makes the whole process systematic, thereby the eradicating the delay at toll booths.

Nilekani further expressed concern over the backlash against globalisation as global trade in the last six to seven quarters has come down.The shipping freight charges have been the lowest for many years owing to the low demand for shipping goods. As reported by Reuters last year, shipping freight rates, which have hit record lows this year, are set to remain weak for the rest of the decade or longer as there are too many ships and because low fuel prices are capping operating costs.

Moreover, India’s export grew by 1.2 percent year on year to $ 22.5 million in June this year, the first gain in 19 months’ low growth, stated a report by Trading Economics. Shipments for the European Union increased by 4.3 percent but declined for the US by 7.4 percent, Japan by 2.2 percent, and for China by 1.8 percent.

“Global growth is slowing down but domestic consumption is going to grow. India is the only young country in the aging world. Whether it is outsourcing or migration, it is going to happen from here. MSME figures show manufacturing growth at 9.5 percent for small businesses and services growth is 15.5 percent, according to the data from the RBI,” he said.

The rise of automation

In the next five years, the manufacturing sector will see full automation on a large scale. Apple and Samsung supplier Foxconn has replaced 60,000 factory workers with robots, as recently reported by the South China Morning Post.

Tesla’s lithium-ion battery-backed Gigafactory (which started operations in the first quarter of 2016) will automate production and is expected to reduce the production cost of electric vehicle battery by 30 percent.

A Reuters report states that Adidas has set up robotic shoe production factories in Germany which will begin operations by 2017. Nilekani said that these shoes will be 500,000 shoes per factory which means two factories are going to make a million shoes. Each factory is going to employ 160 employees, so they will need 300 employees to make a million shoes. The global production of Adidas is 300 million shoes. One million workers in Asia, if all their factories are replaced with these robotics factories, so one million workers making shoes will be replaced 100,000 Germans in a robotic factory.

GST will drive the growth of small businesses

“Service tax revenues are almost approaching excise revenues and the service tax is almost dead and GST will replace it in the couple of years. Service tax is bigger than manufacturing tax and GST is a great proxy of how the market will grow further,” says Nilekani.

The introduction of the GST Bill in the Lok Sabha in December 2014 has given startups and small businesses many reasons to rejoice. These include ease of starting a business, higher exemptions to new businesses, simple taxation, respite for businesses in both sales and services, and reduction in logistics costs and time across states. The bill is expected to be passed in the upcoming monsoon session. Once passed, the bill will likely replace state Value-Added Tax (VAT), Central Excise, Service Tax, Entry Tax or Octroi, and a few other indirect taxes.