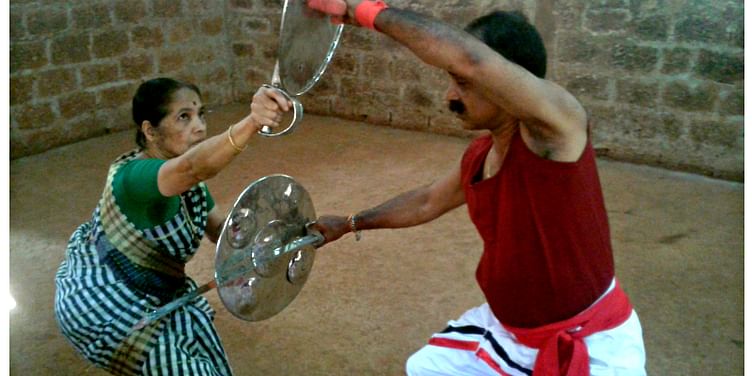 Meenakshi Raghavan Gurukkal walks out into the arena with just a hint of a smile, wielding a convivial yet ominous expression. She may be in character for the duel, but it’s almost as if she doesn’t want the onlookers to forget who she is and what it has taken for her to get there. Her choice of costume — a sari, which she handles with the poise of a tigress — is an extension of that. However, her ornaments — a shield and sword in place of bangles — leave no room for ambiguity. As she swallows whole a man half her age and in the prime of his life, the context has been set for this revelatory rendezvous.

Arguably the oldest female practitioner of Kalaripayattu, an ancient martial art form that originated in south-west Kerala, Meenakshi Raghavan is only getting more formidable as the years pass. Respectfully addressed as Meenakshi Gurukkal or Meenakshi Amma, she has mastered the art of using swords and sticks in this almost dance-like form of self-defence.

Kalaripayattu has seen its share of timely flickers in interest levels from its patrons — who are mainly spread across South India — but Meenakshi Amma has sworn by it devotedly for a staggering 68 years.

Today, she teaches 150 students at her school Kadathanadan Kalari Sangam in her locality in Vatakara, which falls in Kozhikode in the state of Kerala. But she still remembers vividly when she first walked through those doors as a confused albeit excited seven-year-old, clasping the hands of her father and waiting to see what the room had in store for her.

I was first taken to Kalari (meaning ‘arena’) by my father, Mr Damu, at the age of seven. I used to practise dance in those days and that was one of the reasons for me joining the Kalari as it increases flexibility in movements. Later on, my guru, Mr V P Raghavan Gurukkal started training me in Kalari.

The humble beginnings of Kalari and Meenakshi Amma

Kadathanad Kalari Sangham was founded in the same year — 1949 — by Mr VP Raghavan Gurrukal himself, and still stands tall right there, at the same spot, 67 years later.

The antiquity of this ancient art itself is unquestioned. The writings of the Buddhist priests who visited South India centuries ago show that Kalarippayattu had flourished as a rather specialised martial art as early as 5th century AD and was taken by the Buddhist priests and other travellers to China and far off countries. There, it flourished and transformed through the ages to what we now know as karate and judo.

Meenakshi Amma studied till the 10th grade in a school in her hometown Vatakara, and went on to study a course on stitching, even as her legs kept dancing. She later married Raghavan Gurukkal, her guru and founder of the same Kalari, at the age of 17. She feels the need to clarify that it wasn’t a love marriage — as if to preserve the sanctity of the student-teacher relationship. Because of this union and because of her own father’s observation that she was naturally gifted, she was able to stay in touch with the art of Kalari, in spite of it being frowned upon as a recreational choice for girls, in the olden days.

Those days, girls were restricted from being a part of such sports, especially after marriage. Doing what is good for you is often a challenging task for women. But, since Kalari here was a family thing, I had full support from my family and the people in the locality to practise more. Luckily, today, there isn’t any discrimination to that extent.

To master Kalaripayattu, one must conquer all aspects of the artistic sport. Its first purpose is to perfect the art of self-defence and physical competence, through unarmed combat or ‘mey payattu’ and Verumkai, and armed combat or ‘Kolthari’ and ‘Ankathari,’ that uses peculiar types of sticks, rods, ’lathis’, etc and other sharp weapons like daggers, swords, spears. Secondly, Kalari has a medical system of its own, akin to Ayurveda, but with individual specialties, especially for neuro-muscular and skeletal damages, and also taking into account the ‘marmas’, or the vital points of the human body. Meenakshi Amma says,

Kalari also houses spiritual, cultural, and artistic influences on the land, which cannot be ignored while discussing the cultural landscape of Kerala.

For nearly six decades, Meenakshi Amma was a housewife who moonlighted as a sword-wielding Uma Thurman as she fought both opponents at the Kalari and the prejudices surrounding it to attain her destiny of becoming “gurukkal” to 150 young lads and ladies alike. After all, as mentioned, it was never too popular among the women, not only because of the smothered nature of their lives,, but also because it was considered heavy exercise that they were considered unfit for.

But the true fact is that it really moulds women to become much stronger in all aspects. It should not just be regarded as an exercise alone; it’s strengthening both your body and mind. In Kalari, so many self-defence techniques are taught which will definitely be useful for ladies in situations of danger.

It was only after her husband’s demise in 2009 that she was required to act and seal the fate of their beloved Kalari. And rise to the occasion she did. “After my husband’s death, I had to take up his role of teaching Kalari. So it’s him whom I should thank for being able to teach more and more kids,” she relates.

She is survived by her four children and grandchildren, all of whom practise Kalari, staying true to its traditional family-oriented nature and format.

June to September is the main season for training and shows, and her classes are a full house. As for her, she is 73 years old, going on 74, and is aging like wine, as far as her skill in the sport is concerned, performing up to 60 shows a year, many even in cities like Bengaluru and Chennai. She says,

Currently, I am 73, and still practising Kalari. I consider myself a strong woman and will move forward, facing whatever challenge comes my way. My children are all very supportive, and that’s my confidence. Health-wise by God’s grace I am good, and praying to God to keep me healthier so that I can train more students.

Passing the sword on

Here, in northern Kerala, there are still many people that respect Kalari, and many institutions that teach it, but since it is not regarded as competition material, people tend to take it less seriously. Currently, however, the government has taken the initiative to recognise Kalaripayattu as a sport, and there are federations being set up to further this traditional art-sport in the pages of history.

“In fact, until the invention of gun powder and other sophisticated weapons that revolutionised warfare, Kalarippayattu had an important role in enabling the warriors of those days,” Meenakshi Amma informs me. It was even part of education systems of the land up to the 17th century. “In that society where might was right, the mighty were right. And the mighty were worshipped. The disputes between the local rulers or feudal lords were determined by the ‘ankam’ (fight) between the hired ‘chekavar’ (kalarippayattu warriors), and their superb skill was honoured everywhere,” she notes.

Meenakshi Amma is optimistic about the future of the sport in our country. She concludes,

Recently, I have observed a lot of media getting attracted to Kalari. Moreover, the name of the art Kalaripayattu is written in history and that cannot be erased. There just have to be a few people to spread it to the next generation to keep Kalari alive for the coming years.