Why companies get into multi-million dollar M&A deals 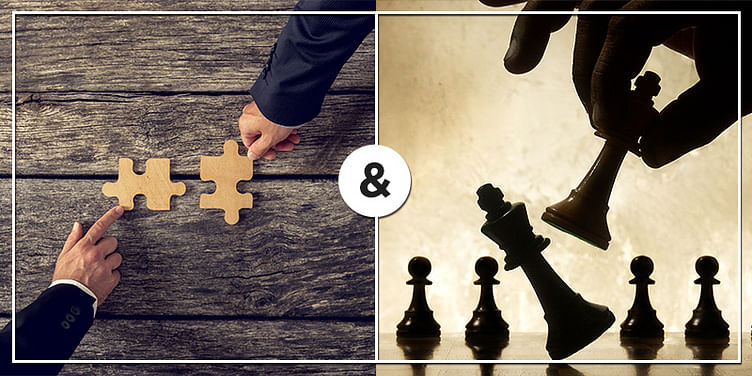 Do you often hear about companies being acquired or acquiring other companies? What motivates companies and their management to make such decisions? Companies continuously seek present and future growth opportunities. A “merger” is very different from an “acquisition”. And the main difference lies in the existence of a company after the transaction. Here is a simple definition:

Merger are two separate entities that combine forces to create a new joint organisation. The purchase in this case is interpreted as “friendly” and an amicable decision between two companies.

Acquisition is a takeover of one entity by another, where the smaller company often ceases to exist. This term at times can have a negative connotation.

Companies put months of due diligence into an M&A deal – from evaluating the fit of the target to the fairness of the offer price. The success or failure of a deal depends on a lot of factors like market reaction, government approval, successful integration of the target into the acquirer company, and, in case of public companies, shareholder approval. Even though there is an equal chance of success and failure, here are some of the reasons why young and mature companies pursue M&A opportunities:

It is the value realised from the extra cash flows generated by combining two businesses. For example, in the Heinz (the tomato ketchup company) - Kraft (the maker of macaroni and cheese) merger last year, the combined value of the merged entity was expected to be $80 billion, creating the fifth-largest food and beverage company in the world. While synergies could be higher for established businesses, young companies benefit from the existence of systems and networks. These benefits can be categorised into two buckets:

a) Operational synergies can lead to lower costs per unit, lower average total costs, or increased efficiency. In the case of Heinz-Kraft, product lines are said to be complementary. It is expected that by the end of 2017 the companies could save as much as $1.7 billion annually through cost reductions and efficiencies arising from scale.

b) Financial synergies result in cost savings, reduced transaction costs, or investment opportunities with internal funds. Heinz benefits from the global platform and this established business could be used to pave way for Kraft to sell its products internationally. Another opportunity that exists is Kraft’s entry into the food service business apart from the existing retail business. Customer acquisition costs in the food service business could be low because of Heinz’s existing footprint.

Diversification of business to keep up with competitors

Acquiring firms with businesses unrelated to the current line of business is called diversification. It can have benefits in terms of new market entry, addition of new products to the existing market, or introduction of new products in new markets. Depending on the growth stage, a company can pursue different growth or risk strategies to expand the business.

French diary company Danone, with brands like Activa, Oikos, and Dannon yoghurt, is buying WhiteWave Foods, a Silk soy milk maker for $10 billion. Why would a yoghurt company buy a milk business? Well, yoghurt is made from milk! WhiteWave boasts of brands like Horizon Organic, Wallaby Organic, Vega, and Silk - lines focussed on the fast growing organic and dairy alternative category. The company is also experimenting with fermentation methods in India. Estimated synergies (yes, the new word you learned above) for this deal are $300 million by 2020. What brings the two companies together is their understanding of the health-conscious consumers and changing tastes. The deal provides Danone a double boost of sales in North America. A much-needed relief to the market share struggle because of competitors like Chobani, which offer exotic flavors and a variety of choices. The only way therefore left for Danone to differentiate itself from competitors is to embrace this new category of organic milk. Danone might introduce soy and organic yoghurt in the future now that it would have soy and organic category experts along with supply chain benefits from WhiteWave, making it a high growth and high risk move.

Taxation is an important component of business and planning. Firms that have accumulated losses and tax credits become good targets as these losses can be used to offset future profits of the combined entity and hence reduce the tax paid. Firms incorporated in countries with high tax rates are motivated to move to tax friendly locations like Ireland. These are called inversions. Two cases of this issue came to light recently; one deal succeeded and the other didn’t:

“If you want the advantages of being an American company then you can’t run away from America to avoid paying taxes.”

Ola, which started operations in 2010, had an incumbency advantage over late arrivers like Uber. In the ride-sharing market, which is growing at 20-25 percent a year, Ola’s 100-percent aggregation model helps it manage the demand for services. The advantage that cab aggregators have over traditional methods of transport is that aggregators are technologically integrated and move with the evolving society. In an industry that is concentrated with a few big players, market share and product differentiation become key. And at times the best option is to buy out another company to fill gaps in capabilities like technology and skills. Increased knowledge and innovation can have significant benefits for a company in the long run. The addition of patents and trademarks to the portfolio of assets makes the company more valuable. A year-and-a-half ago, Ola acquired TaxiForSure (TFS) for $200 million to compete with arch-rival Uber and increase market share from 60 percent to almost 80 percent. TFS at that time had a 14-percent market share. News came in this week that Ola was shutting down TaxiForSure as an independent brand and integrating its offerings into the Ola app. Some valuable assets that were transferred to Ola as a result were the TFS fleet, TFS drive-partners and employees, and customers. The assets went towards making Ola Micro a strong brand with expansion into 90 cities. And now with Ola laying off 700 TFS employees it will reduce total monthly cost by Rs 30 crore.

The e-commerce business is getting competitive day by day. Snapdeal, Flipkart, and Amazon are fighting for larger market share within the high margin fashion segment of the industry. Exclusively.com, a luxury and premium fashion portal, was acquired by Snapdeal last year. And now Snapdeal will shut down Exclusively.com to integrate the entire catalogue into its website as a strategy to add more depth and brands to the fashion category. Out of the $5 billion online apparel and footwear category, luxury fashion goods account for five percent. Eliminating Exclusively.com would mean that users now, instead of going to Snapdeal for affordable brands and Exclusively for high-end offerings, will have only one destination for shopping. As a result, Snapdeal will gain an edge above competitors in terms of product and brands and successfully eliminate a small luxury competitor.

An exit opportunity for founders, venture capitalists, or other investors

Last month, Flipkart-owned Myntra acquired Jabong for $70 million. With this Jabong investors Rocket Internet, which held a 21.9 percent stake, and Kinnevick with a 25 percent stake exited the company. The exit of investors after an acquisition is one of the natural steps in a startup journey. The ultimate goal of an investor is to mentor the entrepreneur, grow the company, and increase wealth. Last year itself co-founders Praveen Sinha and Arun Mohan left the company to pursue different paths. With the company facing losses of about Rs 454 crore, it was the right strategy to get acquired by a big player. This could very soon be a tax advantage for Myntra in its annual filings.

From the examples above, it is clear that the American market is in its mature stage as it considers mergers from a differentiation and cost-saving angle. The Indian market, in contrast, is getting cut throat and edgy with the sudden growth opportunities and competition. Loss making companies want to stay in the business, acquire competitors for assets and competitive advantages, in hopes to becoming profitable in the future. Profit-making companies want to become more profitable and increase shareholder wealth.