What do a marketing company, a Saas platform and a humungous biker community have in common? 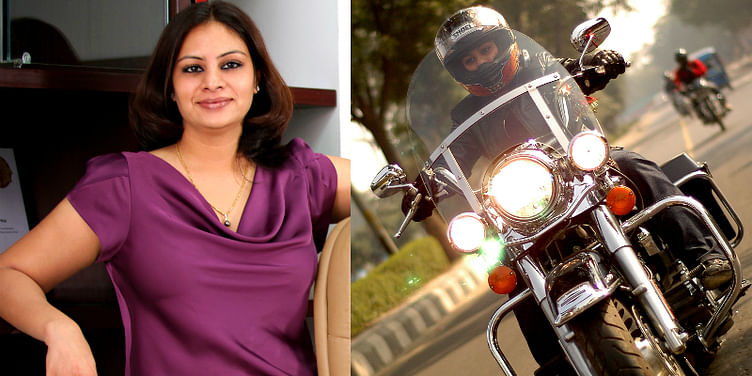 This army brat, who neither had the luxury nor the desire of picking just one place to live in, one mountain to perch atop of, a single river to mermaid across or a single course to confine her intellectual bandwidth to, had no reason to contain her entrepreneurial spirit in a single leap either. We had last caught up with Ambika Sharma immediately after her branding firm, Pulp Strategy, won a barrage of awards for building a wholesome marketing boutique. Two years hence, dusting off her good-old savoir-faire in tech, she sits atop another Software-as-a-Service (SaaS) venture that is now being referenced in three continents, while she moonlights as a bikerni calling on adventurers like her to burn some rubber in order to blaze some trails – literally and figuratively. YourStory plays catch-up with the bikerboss:

Ambika for the uninitiated…

She is a science student who went on to study Shakespeare; a software developer who studied advertising, and finally, channeled a life-long love story with communication and its strategic applications into an entrepreneurial plunge- a first for her family of army veterans. When she was ready to enter the space, marketing was already very mainstream, which meant that the fray had a lot more fighting for the prize. In those conditions, in the year 2011, she founded Pulp Strategy.

The last five years have seen many milestones for Pulp Strategy. They have introduced the consolidation of shared computing retail space in 30 cities in 2011 and launched an augmented reality app in 2012, which could add rich media to marketing collateral.

In order to increase their user base, they consolidated more than 3,000 premier campuses for an intellect-based youth marketing initiative in 2012, and also launched their own studio for animation and video content for the web in 2013. Pulp Strategy gained further traction with the launch of near-field communication (NFC) based solutions for their digital services in 2013, like business intelligence (BI), Object relational mapping (ORM), and analytic capabilities. “Furthermore, we increased and engineered our in-house web and technology development teams to include product development capabilities, in addition to the technology service offering 2014,” explains Ambika.

Over the years, she has built a young and aggressive team of over 140 professionals, and has worked with extremely technical and regulated industries like medical tourism, as well as IT-intensive industries with clients like Google, Yahoo, Microsoft. They have also jived with brands like Nasscom, Dabur and Jiva Ayurveda, Cannon, Michelin, Rolls Royce, Castrol, Philips consumer care.

Their campaigns have bagged a few wins at the DMAi Echo’s, like the AquaTouch “Alex on Strike” Case Study, the SpeedStyle with Philips Case Study , and The Big Leap  Case Study. They have gained over 89 recognitions in five years.

Some early mantras: Ambika advises you to give yourself a guilt-free pass. In a role that needs you to sacrifice a lot of personal time, confidence and self-belief in the priorities you have chosen mean everything, especially in the field Ambika has taken on.

With the tech business at Pulp Strategy, they reached a point when they were refusing more technology business than they were accepting. As a technology service company, custom mobile app-development was a part of their service-offerings, but Ambika realised that they were getting an increasing number of demands for apps, which they either could not address because of limited budget expectations, or because their development teams were already swamped. “We sensed an opportunity to empower businesses and individuals by making the entire process of app development easy and seamless,” she says, of her second Aha! Moment that she knew well enough how to heed, thanks to a three-year-learning-curve in her entrepreneurial journey.

Thus, 2015 saw Ambika concoct another venture to fulfill yet another gap. Instappy, a B2B ‘mobility-enablement’ product platform, allowed easy customisation, reduced go-to-market time, always updated tech for high-quality apps that include custom APIs and advanced features, at a fraction of the cost. It is a SaaS product and follows the subscription model.

They bootstrapped their way through the design, development, testing and go-to-market. Instappy supports app creation in Spanish, Portuguese, German and French as well as English and all Indian languages.

“Our largest markets are the small enterprises across USA, UK, South Africa and UAE. Instappy is now available in over 20 languages. We are hoping that we will not only optimise current markets but with five new languages being launched next quarter, we will be able to expand to new markets as well,” says Ambika.

Moments of redemption: Judgments are an excuse to work harder, and allegations are an opportunity to showcase your achievements. “I love it! I used to get asked these questions so very often – ‘your husband runs the business with you?’, ‘your father must be a business man, it’s easier for business families?’, or the classic ‘who designed the product?’” I take every opportunity, through being an entrepreneur and a woman at that, in my current position, to defy the rules and change notions. Sometimes, something as simple as dressing formally and warmly gets the air-conditioning to work for my side,” she quips.

Around the same time when the Instappy story was finding its feet, Ambika noticed a recurrent theme in all the brainwaves she had gotten. “Over the years, some of the best ideas have happened to me when I hit the roads. Biking is a purposeful passion, which makes you creative and interesting as a person. Every journey that a biker goes out on teaches him something that they might want to share with fellow bikers. Being a biking enthusiast myself, I recognised the strong sense of solidarity that existed within the biking community,” she says.

Her way of translating that string sense of community into a business was Trails of India, the only crowd-sourced community and lifestyle-utility product for the passionate motorcycling aficionados. An exclusive platform for bikers to get to know all about the biking world and share their journeys, stories, notes on gadgets, gizmos and technology related to biking, Trails of India is a collection of bike journeys in the form of pictures, videos, routes and stories, all saved for posterity.

“I wanted to create a strong community amongst the aspiring and matured bikers, and create a community that would archive their biking chronicles, while allowing the members to interact amongst themselves and together explore the unexplored trails,” says Ambika.

Motorcycling as a lifestyle pursuit caught up really quick and in 2015, the market opened up with the world’s top brands entering or announcing their entry in Indian markets. Trails of India has over one lakh active users, hailing from over 300 cities across the country, and has even given them the opportunity to plan events and trip together.

Donning leather and lace with equal grace: Being the boss of a biker-gig, she's ready for her share of hairpin turns, with skeptics seeing her work yet denying her the credit. For them, she defies age-old norms yet embraces her womanhood more and more proudly. "Stand taller than anyone in the room, and keep your heels on for it, maybe! Know your numbers inside out and have confidence in them, and then also focus on mascara!” she chuckles.

She launched Instappy and trails of India Q3 last year and it has been an action-packed phase, launching in international markets for Instappy while planning the e-store launch for Trails of India, the re-seller segment for Instappy and at the same time expanding data intelligence-driven content capabilities at Pulp Strategy.

Recently, they also ventured into the retail segment with Trails of India, providing safety gear, gadgets and the right tyres for superbikes, bringing together inventory from world-renowned brands like Alpinestars, AGV, Scala, Diesel and Michelin.

Running three ventures that are coming of age is no mean task, after all – and to Ambika’s exasperation, how a woman does it has often been a subject of great puzzlement to peers. But the scepticism makes the biker-boss a whole lot more determined. "It's about time people understand that being an entrepreneur is attitude-driven, not gender-driven. When it really comes down to it, attitude, experience, hard work and business skills will define success, not the chromosomes," she confidently concludes.