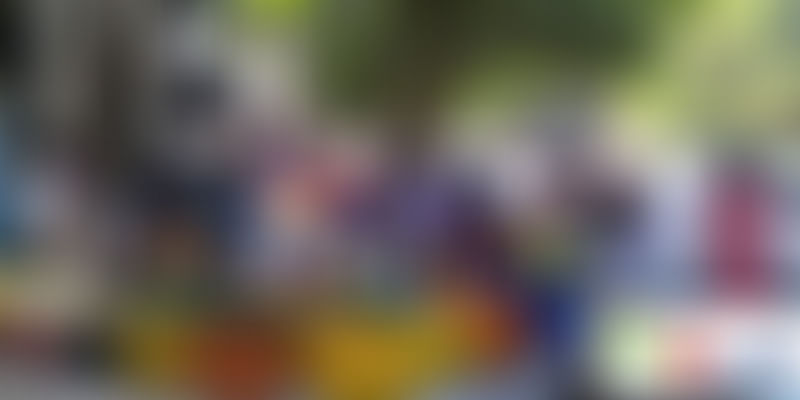 It was back in 2011 when we wrote about Farm2Kitchen, an online portal delivering organic fruit and vegetables in Gurgaon. Fast forward five years, and founders Seema Dholi and Anand Dholi have dedicated all their efforts to make the idea work. “We moved from being an experiment to a sustained effort of keeping this unique platform alive, connecting the minority of small-scale organic farmers and organic producer companies with Indian consumers,” explains Seema.

Farm2Kitchen began from a personal need and has gone on to explore the subtleties in the business of organic food. “Over the years, we studied Indian consumers' behaviour and worked on a strategy that has been a good one so far,” says Seema. Farm2Kitchen offers all organic products—grocery and lifestyle products like organic clothing or cosmetics—through an omni-channel retailing model. The company works with small organic farmers and connects them to consumers in cities.

As a model in tech, they are no different from the BigBaskets of India and the larger player may very well provide organic foods as well, but Farm2Kitchen has been a built on a niche of everything within organic. This has led to a few experiments to spread awareness. “Unless the consumers are connected to ground reality, he/she is not going to consume organic products,” says Anand.

For this, the duo has started TheFarmersMarket.in and LifeatFarm.com. Farmers market is the age-old concept of farmers coming together at one place to sell their produce, but owing to rapid urbanisation, these markets are being replaced by malls. Instead of technology enabling and improving on something beautiful, it has disrupted the system in an entirely new direction. “The mission of The Farmers Market is to humanise food systems by developing local markets for farmer and artisan products. From the grocery aisles to the industrial farms that fill them, the business of food is on the brink of soullessness—dehumanised by the reduction of our food that erodes the relationship between consumers and farmers, as well as farmers and the earth,” says Seema. Via the farmers market, one can expect to shop fresh organic vegetables and fruit from certified organic farms around one's city. This initiative has been launched in Nashik and will be followed by Mumbai, Vadodara and other cities.

LifeatFarm.com, the other initiative, is a portal dedicated to eco-organic tourism. “At LifeatFarm, our mission is to help bridge the gaps between urban and rural India and help tourists connect with rural life,” says Anand. This effort is an extension of Farm2Kitchen, which intends to take the consumers close to ground reality.

The state of farming practices in India

There are different views here. The promoters of organic farming strongly believe in the practice, while the folks on the other side have an entirely opposing view. The choice finally boils down to an individual. “During the traditional technology period in India, the use of chemical pesticide was limited mainly to the high-value crops. The traditional varieties did not face much problem of insect pest and diseases and if at all they occurred, the traditional method available could control them. However, the introduction of hybrids and adoption of intensive cropping practices demanded high pesticide use to check the yield losses,” says Anand.

Pesticides are now extensively used to control various pests that are harmful to crops raised by man for food, feed and fibre production. Though they have played an important role in boosting agricultural production, most chlorinated pesticides are non-biodegradable and leave residues that are detrimental to human beings, animals and the environment. “Residue studies in India have also revealed widespread contamination of the food products and the environment as a whole. The presence of residues of insecticide in food commodities and other components of the environment is a matter of serious concern,” says Anand.

Organic farming is a holistic production management system that promotes and enhances the health of agro-ecosystems, including biodiversity, biological cycles and soil biological activities. As a result, there is widespread organic movement and increased demand for organic products. Consequently, many startups have cropped up in this field- I say Organic, Organicgarden.co.in, Liveorganic.co.in, Eatofresh and more.

Just like any other sector, this particular niche is also seeing increasing competition and it is good for the area. More such initiatives are indicators of more demand and will probably drive more people to grow organic produce. For Farm2Kitchen, the company has hired Garg Partners as their investment manager to rope in investors as they seek to raise $1 million. The company has been among the top three organisations recognised for outstanding contribution in Digital Innovation for Agricultural Solutions at the Digital India Summit & Awards 2016.

The team is currently working on value addition to fresh organic produce, where wastage can be reduced. “In this regard, we are experimenting with solar-dried organic vegetables, which have the same nutrient value but a higher shelf life. We are also going to introduce low-price organic products to help farmers who are not certified but are doing organic farming ethically. We are launching a separate brand for this category soon,” says Seema.

Farm2kitchen works with almost 300 organic farmers in and around Nashik district for fresh vegetables and fruit. It also works with organic farmer groups from the rest of Maharashtra for cereals, pulses, beans etc. The company has started doing farming on its own in Nashik as well. “We are developing organic farms near Nashik in a farmland covering an area of 70 acres,” says Anand.

Directly or indirectly, the company claims to be connected with almost 1,00,000 organic farmers through their association with their partner companies and vendors. Farm2Kitchen has also opened stores in Mumbai and Vadodara with more to follow.

Till recently, mostly NGOs have been involved in promoting and organising the organic produce sector, but the last few years have seen a growth of startups in the tech framework tackling the problem. As a whole, it is good to see more momentum in this sector but the key will lie in staying true to the cause and not losing sight of why these initiatives were started in the first place.