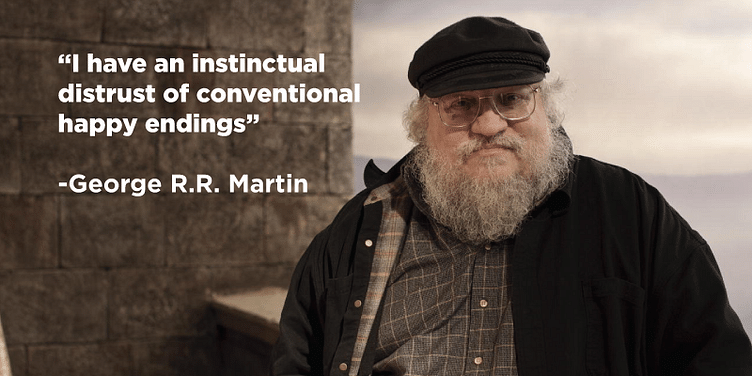 “I have an instinctual distrust of conventional happy endings”

We’re all living in a state of limbo. What is this limbo? It’s the intermediate period between two ground-breaking seasons of our life’s purpose – Game of Thrones. Toning down on the drama a tad bit, it will suffice to say that we all owe some form of homage to the man who gave us the bestselling series A Song of Ice and Fire – George R.R. Martin.

The thing about Martin is that on first sight, he looks a bit like Santa Claus. With his bulging belly, round-trimmed glasses and scuff of fluffy white hair and beard, Martin could even pass of as a peaceful grandfather who reads his grandkids bedtime stories to sleep tight. But no, his stories are nestled upon ruthless beheadings, gory battlefields, power battles, sexual discrepancies and, of course, who’s to forget the white walkers?

Martin’s novels have been adapted into a multiple Emmy-winning Fantast Drama series that now has its own cult-following. Enough has been written about the Starks, Lannisters and Targaryens to last us a lifetime. But today, we’d like to give you an insight into the life and mind of the genius who gave us the world of the ice and fire.

Born into a semi-affluent family in Bayonne, New Jersey, Martin revealed in a detailed interview with The Telegraph, that his father was a proud American with a religious zeal for American Football, while his mother would enjoy the occasional bestseller. Imbibing on her genes, Martin had always loved fiction from an early age and would spend a good number of his teenage years selling monster-stories to the other kids in his working-class neighbourhood. In high school, he began to cultivate this love for literature and tried his hand at fan fiction for the first time. On the side, he also realised his affinity for chess, and in the all-boys Catholic High School he attended, he became unbeatable at it.

Martin went on to pursue Journalism from the Northwestern University, earning both Bachelor’s and Master’s degrees in the same. It was around the period when the dreaded Vietnam War was in full play and Martin made it a point to be a conscientious objector to the same. Ironically, at the time, war ruffled his feathers and even his graduation picture revealed a mortarboard, customised with a peace sign. However, Martin seemed to have had a change of perception where was was concerned, considering the gore and bloodshed in his series. “I’m fascinated by war. War brings out the best and the worst in people. Literature of the past used to celebrate the glory of war; then the hippie generation in the 1970s wrote about the ugliness of it. I think there’s truth in both,” he said.

After bidding adieu to his student life, Martin took his first steps down the road of published fiction writing. His first story The Hero was sold to the Galaxy and published in 1971. A collection of tales after this first attempt got him well-versed in the dialogue of fan-fiction in the literary circles, but it was only in the 1980s that he attracted attention from Hollywood. In 1986, he secured himself the role of story-editor for The Twilight Zone at CBS Television, and two years later he became the Producer for Beauty and the Beast. From 1992 to 1993, he worked as an executive producer for Doorways, a Columbia Pictures special, before he realised that television wasn’t giving him the leeway to write out all his fantasies and put them out to the world. He thus left the world of television, temporarily, to get back to penning down his parallel world on paper, and thus A Song of Ice and Fire was born.

Although Martin has often been compared to J.R.R. Tolkien, Martin’s fictional world was miles apart from Tolkien’s. Apart from a few aspects, Martin’s work doesn’t emphasise magic, nor is there is an ultimate battle of ‘good versus evil’, something that is replete throughout The Lord of the Rings. Even his best characters have tumultuous flaws governing them, while his worst seek redemption. Martin modelled the concept of the series from tiny pet turtles that he was allowed to keep as a child. According to many interviews, he would house them in a toy castle near his bed and when each one died, his imagination would conjure up a sinister story to explain their deaths. “I started writing this fantasy about who was killing who, and the wars for succession,” he once said. From here on, he realised the central plot and theme of Ice and Fire – the survival of the fittest. He also fashioned ‘The Wall’ after the state of his Northwestern Campus during the 1967 Chicago blizzard, where “There was so much snow that winter, you couldn't see, all snow, all ice, and it was so very cold.”

Despite currently being one of the most noted and revered billionaires of the world, Martin doesn’t let the fame get to his head. In his own words, he keeps trying to learn and grow from his characters and their stories, often going over them in a loop to get a better idea of what he wants to list down for their individual fates. He doesn’t live in a mansion although he could well afford to. Instead, he chooses to live in a moderately comfortable house, has a passionate love for oriental items and has his house decorated with medieval and other historically designed swords and structures. He was married for the second time to Parris McBride in an almost Celtic wedding. In his own words, they are both constructive hoarders and help each other in their crafts while doing their own thing.

George R.R. Martin is a man that contains a vision of a new kind of dimension entirely, and as we wait anxiously and impatiently for him to finish his next book, we’ll let him take a breather on his 68th Birthday. Happy birthday, to our favourite Lord Commander!