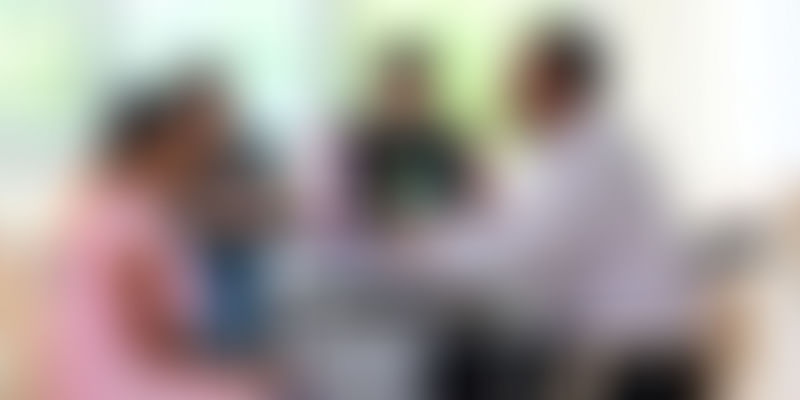 Our news feed is overflowing with stories of “angel” investors who come in at a delicate stage and carry a potent team on their shoulders, ensuring that they can shine unperturbed. But travel to the fringes, and you will see that the angels needed there need to truly live up to the name. The angels at HelpAChild provide some truly troubled yet spirited children with the light of love and care, and the resources required for them to embark upon their journeys with confidence.

The duo runs a biorefining business, Godavari Biorefineries Ltd, along with a venture in the education sector. Help A Child is their company’s CSR initiative.

The idea of Help A Child came about in 2001, after the couple met Sujata, a young girl from a small village in Northern Karnataka. An extremely bright girl and an exceptional student, she was on the verge of discontinuing her studies post 10th standard due to financial issues. “Her story touched us deeply, and it’s from there that we started looking at sponsoring meritorious and underprivileged students,” says Amrita.

Even gentle probing into this issue will reveal that this sorry state of affairs plagues myriads of families that consider higher education for children a major financial burden, especially in rural areas. Parents would rather that their children do menial jobs and contribute to the household’s expenditure as early on as possible. This is even more prevalent in the case of female students, who are often married off forcefully after their 10th standard, relieving the family of her living expenses.

“We understood that if funding was provided to these students, their parents would still let them study as they did not have to bear the financial burden. Our solution was the provision of monetary scholarships to these young bright minds,” she explains.

The idea of a scholarship programme for needy and meritorious students stayed with Amitra and Samir, and, in October 2001, took on the shape of the ‘Help A Child’ initiative.

Other than monetary aid, the couple has also decided to ensure the holistic development of their beneficiaries by conducting English speaking, career-guidance and personality development workshops for them. They also provide expensive textbooks and laptops to engineering and MBA students.

Information regarding the scholarship is sent out to potential beneficiaries through means of circulars, which are sent out to approximately 300 identified institutions in Help A Child’s area of operation – Northern Karnataka and parts of Maharashtra. Besides that, information regarding the scholarship programme is also published in local newspapers.

They have a rigid four tier shortlisting process. The students fill up an online application and the selected ones write an exam. The ones that meet the cut off are then invited for personal interviews. For the candidates that clear the interview, the Help A Child team conducts house visits to verify the information provided by them about their economic status. The ones that emerge genuine after the background check are finally selected for the scholarship.

“We give first preference to orphans, second to students raised by single parents, third to students doing part time jobs along with their studies and fourth to students who come from families involved in daily wage labor,” Amrita states.

Through such outreach programmes, cases like Ritesh Billur and Shweta Kallur were identified and remedied.

Ritesh Billur is a bright boy from Jamakhandi whose father passed away when he was seven, and his mother abandoned them a little later. Ritesh’s uncle and aunt, with whom he lived, had tried to support him, but their income from weaving was not substantial. With Help A Child’s timely help, Ritesh realised his potential, eventually pursuing his dream of studying engineering. He is now successfully employed by the Federal Bank in Bagalkot district, and is in the process of constructing a two-storey bungalow for himself and his family. The story came full circle when he also doubled up as an active donor.

Shweta Kallur’s was another story brimming with possibility that was dangerously close to a premature end. Another resident of Jamakhandi, she comes from a family of nomadic drama artists. Shweta, when young, worked as a domestic help with her mother, while Shweta’s younger sister, who was forcefully married off by their father at the age of 14, committed suicide due to atrocities inflicted upon her by her husband. Such were the disturbing circumstances under which Shweta studied and scored a brilliant 86 percent in her 10th standard exams. After that, however, she did not have the means to continue her education, but the intervention of Help A Child ensured that she completed her M.Sc., even topping the university in Physics. She is now a faculty member in Degree College, Jamkhandi and stays with her mother.

Sujata, meanwhile, has completed her M.A. and is now a Kannada teacher.

Just like these shining cases, the couple has helped over 3,300 students realise their dreams over the past decade and a half.

The cost of sponsoring one child could be anywhere between Rs 2,500 and Rs 50,000, depending on which creative pursuit the child wishes to embark upon.

Thus, funding remains a challenge for the noble organisation. HelpAChild raises awareness through crowd funding campaigns, one of which is currently active on Ketto, personally interacting with prospective donors, conducting Donors Meet Ceremonies, where the donors and beneficiaries get the chance to interact, as well as by approaching major corporates and participating in charity marathons.

“We look at both traditional and modern ways of raising funds. We have, thus, built a very loyal donor base that religiously sponsors students every year. We do, however, need to keep expanding that base, so that we can expand our area of operation and reach out to many more underprivileged students,” Amrita concludes.