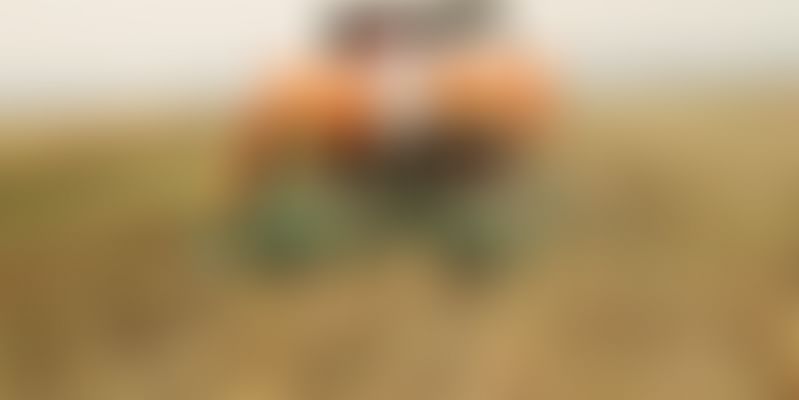 Driving to Ludhiana and around it, one sees smoke and soot hug the Punjab landscape. The haze gets thick at about 5 pm and darkness sets in before dusk. Paddy fields have been harvested; combines have left rows of piled straw in them. Punjab Agricultural University’s (PAU) Vice-chancellor, Baldev Singh Dhillon expects a high average output of 6 tonnes per hectare, despite the sap-sucking brown plant hopper attacking at the maturity stage. About 8 percent of the crop may have been lost to the pest, he says. Farmers have escaped by planting early-maturing varieties.

From 20 October till 15 November, farmers have a narrow window to sow wheat. Every day of delay beyond the recommended time means a loss of 23 kg per hectare, says H S Sidhu, who looks after the 500-acre field station of the Borlaug Institute for South Asia (BISA) in Ludhiana. Setting fire to stubble and straw is the quickest and cheapest way of getting paddy fields ready for sowing wheat.

There is a ban on burning but with assembly elections looming and the ruling Akali Dal unsure of voter confidence there is little evidence of enforcement. Winds from the state blowing over Delhi have made the air, already polluted by vehicle smoke and construction dust, unhealthy to breathe. The National Green Tribunal has upbraided officials of the neighbouring states, but in Punjab one sees little enthusiasm for enforcing the ban.

Agriculture Commissioner B S Sidhu, who is trained as an irrigation engineer, muses about the Punjabi propensity for breaking the law, the lack of social capital, and the difficulty of mass prosecution in the absence of viable alternatives to stubble burning. In his view, getting wheat farmers to manage straw on 3.4 million hectares without burning it would require multiple years. He cites the campaign to preserve groundwater which began in 2002, with famers being told there was no advantage in transplanting rice from 1 May when evaporation losses are high due to summer heat. At that time, about 1 million ha was early transplanted. By 2007, the area had declined to 2 lakh ha and when the law was enacted in 2009 banning rice transplantation before 10 June, there were no mass protests.

The pollution levels in North-west India during winter do not permit such a relaxed time-table especially when there is a tried and tested alternative. BISA has been practising it for the past four years. It is called conservation agriculture. Under this practice, wheat is sown in straw-covered fields. The straw acts as mulch; it conserves moisture and suppresses weeds. Over time the straw degrades and enriches the soil with organic carbon.

This practice requires modified machines. Conventional combines cut paddy and after separating the grains, leave trails of piled-up straw in fields. But with a shredder-cum-spreader fitted to the straw-ejection vent, straw is evenly dispersed. A device called “happy seeder” hitched to a high horsepower tractor cuts narrow slits of 4-5 cm in the straw-covered fields. Wheat is sown in them along with fertilizer.

The device was developed by a team from Punjab Agricultural University, headed by Sidhu of BISA ─ he is on deputation from the university ─ with Australian financial assistance and Pakistani collaboration. Sidhu disappointed with a mundane answer when asked whether the device was named after his son, and would it have been called Bubbles if he were so named? “We called it happy because no smoke means no tears and the comfort it gives farmers by saving cost,” he said.

With happy seeding, fields do not have to be ploughed and planed. That is a saving of about Rs 3,000 per acre. Ploughing is anathema to conservation agriculture. After the fields are ploughed the first time and laser levelled ─ so water can flow evenly ─ the soil is not supposed to be turned for many many years unless the surface gets very uneven. Capillaries formed by roots of the previous crop soften the soil and allow aeration. Weed seeds below the surface cannot germinate. Wheat can be sown early. As a result it escapes terminal heat in March. Organic carbon strengthens the stems and prevents crop lodging.

Apart from its own 400 acres under wheat, BISA says it has demonstrated the practice in about 300 acres in two “climate-smart” villages it has adopted. This correspondent met some of those farmers. A few were fully convinced and were only doing zero-till wheat sowing; others had hedged their bets. Part of their wheat crop was zero-till and part of it sown in paddy fields cleared with fire. These were a cautious lot.

Dhillon says PAU is demonstrating the practice on 500 acres in all the districts of the state. So far, this season, it has covered 150 acres. Agriculture Commissioner Sidhu says no-straw burn agriculture is being practiced on 60,000 ha in the state. That is less than two percent of the wheat area. It all smacks of tokenism. Even BISA does little outreach. It should have a bigger budget to spread the word around. There is little point in doing research, if it remains the subject of academic discussions.

PAU recommends microbial decomposition of straw in fields and composting, in that order, but its own technology takes 40 days for the straw to degrade. Dhillon says efforts are on to reduce the time by half. Along with early maturing rice, this should provide farmers enough time to sow wheat.

But the ideal should not be the enemy of that which works. Conservation agriculture has been shown to work. But officials cite cost as an impediment. Every combine would have to be fitted with shredders and spreaders, but most of the combines in operation have low-power second-hand engines, Most of the tractors are also not powerful enough for happy seeders.

With a combination of law enforcement and financial incentives, equipment hiring companies should emerge. Sangrur district under the leadership of collector Arshdeep Singh Thind has set an example. Through seminars and field camps farmers have been sensitised to the harm large-scale straw burning can cause. The district’s Agriculture Commissioner Amandeep Singh says it has a high concentration of 275 happy seeders. They are privately owned. These can cover about 7 percent of the district’s wheat area during the time available for sowing.

The problem of paddy stubble burning is too serious to be left to vote-hunting politicians and salaried officials and scientists. It requires innovative entrepreneurs and private companies to step in. Technology backed by capital should be able to fix it. Farmers should be offered options beyond stealthily setting fields on fire and ploughing in the evidence with a sympathetic administration looking the other way.

Can on-demand grocery startups change the fate of farmers in India?