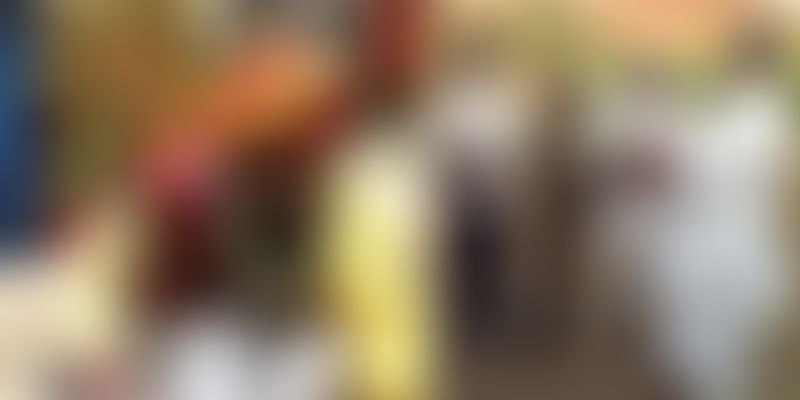 In the wake of urbanization, we have witnessed rapid deforestation, depletion of green cover and destruction of vast stretches of trees in rural and urban landscapes alike. Effects of such activities have had far ranging consequences in our lives. There are more drought hit regions today than there were a couple of decades ago. Temperatures are rising at an alarming rate, as we look for a viable solution to these problems.

Climate Change is one such consequence that is plaguing the world right now, and while many of us are only aware about it and talk about it, there is much that we, as individuals, can contribute towards bringing about a positive change.

Reviving the old tradition of Ayurveda

As an attempt to address the draconian problem and in parallel, also revive the old tradition of Ayurveda, Samarth Yogi Arwind, a 43-year-old spiritual guru, is on mission to plant 10 million trees in the drought hit regions of the country.

Arwind resides in Rishikesh, a small town situated in the foothills of the Himalayas in Uttarakhand. He has travelled far and wide, teaching yoga and the importance of Ayurvedic medicine to the masses. He started planting trees in 2013 and has ever since tried to increase the efforts to conduct plantation drives on a larger scale in as many areas as possible.

The first plantation attempt began with planting of Amla and Bael trees, in areas of Rajasthan. Arwind saw this as an opportunity to educate the local people on not only the importance of Ayurvedic medicine, but also creating awareness about the importance of planting trees, and understanding how to take care of them.

The next year, the drive was conducted on a larger scale and around 500 trees and shrubs were planted in the region. Since then, Arwind has made a practice to have the plantation drives in the months of June and December every year. He picks out the saplings for each of these drives, deciding which plants might grow and benefit the local people of the particular region.

For the plantation drive in 2015, Arwind spent at least two month in collecting the samples from various places, getting the pits dug and planting them and setting up protection for the saplings.

Being a spiritual guru and a yoga expert, Arwind has wide spread followers and disciples, whom he meets during Satsangs and Sadhanas at various ashrams across the country. He took this platform as an opportunity to spread the word and take this task forward.

He started talking to his disciples, gathering local people and much needed support to fund and organize this campaign. This year’s plantation drive will be taking place in the drought-hit regions of Marathwada, Rajasthan and a few parts of Uttarakhand, hoping to plant around 10 million trees. The saplings for the drive come from various donors, and Arwind himself has set up three nurseries in Nashik, which supplies the needed saplings for the drive.

The drive in July this year, which was conducted in Nashik, started off with planting about 800 plants with sapling that were brought in from the nursery. With the plantation of those saplings in Nashik, Arwind and his team has planted 130 species of plants so far.

The villagers and the recruits are trained and educated on how to take care of these plants and how to use them for medicinal purposes. Right from the anatomy of the plant, to the medicinal properties of the plants, Arwind makes sure that the local people are thoroughly educated on the subject.

Climate change as a driving factor

“There is a need to spread awareness about Ayurvedic medicines and its importance to today’s generation and equally important is the issue of climate change, which has been one of the driving factors of this mission.”

Arwind has received tremendous support from his friends, disciples and his circle of Ayurvedic doctors and researchers for these plantation drives. Through crowdfunding, he hopes to make his dream of planting a million trees come true.

Talking about his future plans with these drives, he says that he wishes to plant a million trees in every district of India.