Having watched his father donate blood since his childhood, the cause has always been close to Raghav Baldwa’s (now 24) heart. He followed suit at the age of 17, but there was more that he wanted to achieve.

Back in his home town of Indore, he noticed that a lot of people were finding it extremely difficult to find blood donors in cases of emergencies.

Raghav decided to respond to this situation and in an effort to bridge the gap between donors and people in need, he put up a pamphlets in five government hospitals, three private hospitals, and a few medical stores, asking people seeking blood donors to contact him.

Soon after putting up the posters, he started receiving requests for donors across blood groups. Seeing this as an opportunity to promote the cause of blood donation in his neighbourhood, he spread the message through word of mouth. He went on to create the Facebook page, ‘Blood Donors of Indore’ in September 2012. This helped Raghav gather quite a number of people who could donate blood on a regular basis.

On seeing the demand for blood donors in India, Raghav decided to dig deeper and understand the gravity of the situation in the country.

He studied the blood donation scenario in India and came to learn that although over 50 percent of the population is fit to donate blood, we are still short by three million pints annually. Raghav says,

“My father has donated blood over 60 times so far. I’ve learnt that if there’s anyone who is in need of blood, surely there’s someone who can donate blood and help save a precious life.”

“Social media has helped me a great deal in reaching out to the donors. The Facebook page that I created allowed me to post requirements for blood, which got responses almost instantly because of the rapid sharing and tagging of the posts. WhatsApp has been equally instrumental in spreading the message. I created messages that spoke about the importance of blood donation and the need for it today. I send out these messages as often as I can and I have received an overwhelming response.”

This helped him gather data on various donors in the city, which led him to organise his very first blood donation camp, in collaboration with the NGO Thalassemia And Child Welfare Group.

The camp was organised at Lakshmi Narain College of Technology, Indore, from where Raghav had done his engineering.

The blood from the camp was given to around 150 patients suffering from thalassemia, a condition which requires regular blood transfusions in order for the patient to survive. India has about 10,000–12,000 children who are diagnosed with thalassemia each year, and there is an estimated two million units of blood required for these patients.

Upon the success of the camp, Raghav decided to take this effort nationwide. Recognising that there is an equal need of blood all over the country and after receiving numerous requests from various cities, Raghav started ‘Blood Sure’ in October 2015.

"I have had the opportunity to travel across the country, thanks to relatives who hail from different cities like Chandigarh, Calicut, and Jorhat. This, incidentally, gave me the opportunity to visit various places, understand the ground reality, and spread awareness on blood donation."

Raghav, who is an MBA dropout from T A Pai Management Institute, Manipal, attributes his success to his college’s alumni who have been instrumental every step of the way.

In addition to support from friends and family, Raghav received assistance from various organisations like AIESEC, which have helped him in organising and promoting the cause of blood donation.

Currently, Blood Sure has got close to 10,000 followers on Facebook and the 5,000 followers on Twitter. There are around 50 verified Twitter accounts which retweet the donation requests from the organisation. Around 75 percent of the requests that Blood Sure receives are taken care of online.

Blood Sure has organised over 35 camps and collected 4,000 pints of blood with over 75,000 frequent voluntary blood donors.

With increasing cases of chikungunia, dengue, and thalassemia, there is an increasing need of blood and platelets. Raghav, along with promoting the cause of blood donation, is also working towards busting the myths that surround blood donation.

Moving forward, Raghav aims to work on a blood donation app, a location-based application that will help locate and communicate with blood donors in the vicinity. This, he says, will be an application that can be used in the region of Southeast Asia. He says,

“If only 10 percent of potential donors in India donate blood once in six months, it'll be sufficient for the whole of Southeast Asia.”

Raghav has been organising crowdfunding campaigns to help raise funds to design this application. Blood Sure aims to rid India of blood shortage by 2027 and hopes there will come a time when it will cause no deaths. 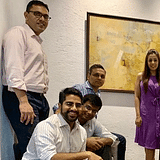