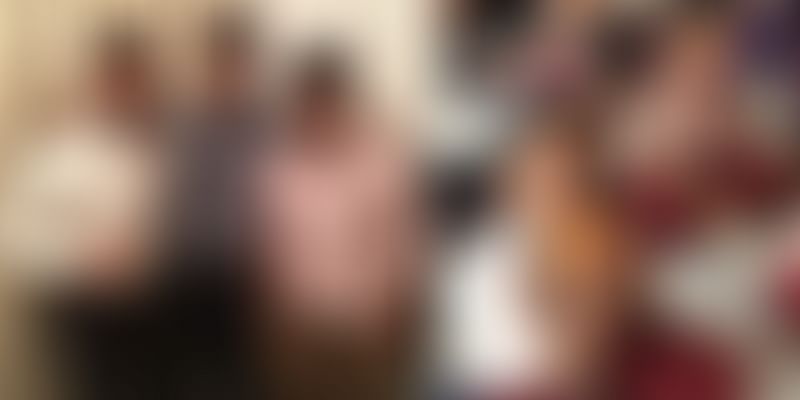 What started off as an effort to manage waste food, GiveAway is now a platform that connects donors to beneficiaries, to provide for people in need.

“The three of us were on the Marina beach, when we saw an old man searching a pile of garbage in the hope to find anything that was edible. On the very same beach we saw a family throwing away almost full plates of completely edible food. That’s when we decided to address the problem of food wastage,” says Mohamed Asif, one of the founders of GiveAway.

From food to bare necessities

The three founders, Asif (24), Nareshwar Sivanesan (25) and Fahd Khaleel Wallajah (25), were always concerned by the problem of hunger in the country and as an effort to address the interlinked problems of hunger and food wastage, they started a group called ‘GiveAway’ in September, 2015.

GiveAway started its journey by collecting extra and leftover food from households, wedding receptions, restaurants and parties from all over Chennai. The group personally went to these places and collected the food and ensured that it was packed in a safe and hygienic manner before it was delivered to the beneficiaries.

The group started taking requests over WhatsApp and in just over five months, GiveAway began to evolve and started to cater to around five lakh people in Chennai alone. As a result, GiveAway soon started to feed at least 1,000 homeless people every day.

Sharing an incident from one of their food donation drives in Chennai, Asif says, “One of our donors who had read about us in the newspaper called us up, sounding extremely appreciative of the work we were doing, and started narrating his story that really moved us. He was a man who grew up in one of the roadside shelters in interior Tamil Nadu, lost his father at a very early age and was survived by his mother and two brothers. When he was a child, his family used to just get one meal a day and sometimes not even that. They survived on leftovers from the dumps. Today, as we speak, he owns a rice mill and pledges at least 100 bags of rice every month from his own capacity to GiveAway. His only motivation being to make sure that no one goes to sleep hungry and that he will continue to ensure just that. Our conversation lasted for well more than an hour and it’s donors like him who motivate us every day to do what we do.”

But it was during the Chennai floods of 2015 that the group really began to understand the challenge of feeding the hunger. Owing to the floods, hundreds of families were now homeless, destitute, helpless, and above all hungry. GiveAway had a bigger task ahead of them, and rising to the occasion, the team contacted about 10 corporates who could come to the rescue at this needy hour. Their efforts came to light when most got back to them with some form of relief. McDonald's gave them Rs 10 lakh worth of coupons, which were distributed to kids and volunteers involved in the flood relief. GiveAway ran a crowdfunding campaign for the people of Chennai, in collaboration with BigBasket on their website, and raised essential groceries worth Rs 22 lakh in just seven days of the campaign.

The team also got help from FoodPanda, which ran a crowdfunding campaign to source biryani for about 20,000 people from Bawarchi restaurant in Hyderabad, and transported the food to Chennai in two flights, with the help of IndiGo Airlines, and Parveen Travels, when the airports were shut due to the rains.

GiveAway served the rations and essentials received through all the corporates to about 5,000 families who had lost their livelihood due to the floods. The team sourced around 200 tonnes of food and essentials during the floods, valued to be close to Rs. 5 crore.

A bridge between the donors and the beneficiaries

After their efforts during the floods, the team started getting calls from various parts of the country and from around the world. This was when they realised that they were looking at a global crisis that called for a more permanent and standing solution. The team then decided to work on a platform that would connect the donors to the beneficiaries and allow them to donate the bare necessities and essentials that the beneficiaries need.

“The platform is a transparent donor-to-beneficiary platform where anyone who wishes to donate would be able to provide – groceries, readymade food, books, education, healthcare support or anything for that matter that he or she wills to donate to the ones in real need via partnerships with varied corporates. The donors would be able to track their donations in real time and be aware of where their donations went to,” explains Asif.

The team, which is only 12-people strong, has been able to reach out to and impact the lives of over seven lakh people across India as of today. GiveAway has been associated with major causes in the country, which include the 2015 Chennai floods, the drought in Maharashtra, Cyclone Vardah of 2016 in Chennai, to name a few.

The team also finds a way for the donors to be associated with the cause that they are donating to by giving them an opportunity to volunteer by being the campaigner of the cause. Asif says,

"GiveAway does not charge its donors for the contribution made to its causes. Moreover, Giveaway is the only platform unlike other crowdsourcing platforms in India, which charges neither the donor nor the beneficiary."

Asif and his team have a vision to get every home/orphanage/cause in this country into one fold and give them a digital voice that they do not have access to, thereby helping them crowdsource their needs through the donors on our platform.