ALL Indian women definitely have this one habit, and it's gotta go 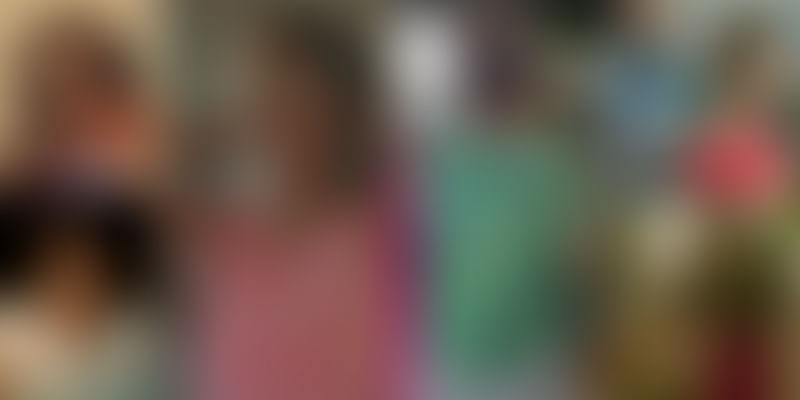 The body shaming parade is mostly found to be restlessly idle on Indian soil – because, as it turns out, most of us women have been doing their work for them. In a country where the definition of modesty changes every few hundred kilometres to welcome a blouse here or a shirt there that a predecessor would have shunned and shamed, there's still a thread that binds us all together. It's that little voice in our head that tells us, no matter what we're wearing, that there's still scope to cover up just a tad more.

Elle and WEvolve made possibly the most relatable video on this odd reflex we have to counter the stripping vulnerability we feel with that piercing male gaze. The characters in the video are shown donning most of the styles you'd see an Indian woman sport on a regular day outdoors – European to Marwari to Punjabi – albeit with three common accessories – the defensive-dupatta, the handy-hand, or the proper-prop.

Meet our soul-sisters from the video

Her spirits at breakfast might be just like your eggs - sunny side up, but dare your body try to act the part. Her half sleeved button-down top must stay put; she must try and enjoy her not-so-happy-meal absolutely stiff.

Her natural body and its curves are made to feel like an embarrassing outgrowth. Even in that rather flattering purple top, she shields almost the entirety of her god-given form with her bag as soon as someone gives her a fleeting look.

Her bra strap is made to feel like her dirty secret. She instantly tucks it in and pretends it never existed.

Her armpits must be the oldest and most constant member of the Illuminati. They must not be revealed, and she tends to remember that great responsibility at all times.

The saree, India's pride, is supposed to be a simple, vast expanse of fabric that effortlessly takes any body's form, sits on it with carefree nonchalance, and yet, does so in styles that only your imagination can limit. But it isn't so 'sanskaari' if she can't make it sit “naturally” while having it cover everything it possibly can, like a metal shield rather than a piece of cloth.

The one layer of opaque clothing provided by her churidaar isn't enough – God forbid someone sees the natural form of the average human being! She tops it off with another thick fabric, just in case.

And what would it say about us as a society if we let the yogi breathe completely free and heal in carefree clothes? Nope, no human (read woman) being should have that basic privilege in this messed up world. One hand must be occupied in shielding her “modesty”.

And why would she feel like someone doesn't have the right to stare her down in her own home? She has no choice but to stay uncomfortable in the one place that she goes to to be herself.

Haven't we all played the same role as these women, every day of our lives?

Never truly running that race on the sports day with all your heart because your breasts can't look like the forces of nature they are; besides, constantly adjusting your uniform's skirt, which gets caught between your legs like, well, pants, doesn't exactly make running fun to begin with.

Slapping scarves onto short-sleeved tops for trains, or worse yet, spending fifty times the amount of money and time on a cab, if you're going somewhere all dressed up and ready to slay. But the men have never once had to plan their travel based on their clothes. They'll just meet you there.

Chatting uninhibited with a friend's mum, but instinctively pulling your waist-length top further down till it cannot be physically stretched any further when their father walks in, even as the boys do not once bat an eyelid or break their flow.

Instantly tugging at the neckline of your kurti while walking through a dark alleyway, as men in shirts with the first five buttons popped open asses your morality.

Arranging for serongs and cover-ups to greet you the second you step on dry land from the ocean, as your shirtless male friends casually decide to have their beers as the wind strikes against their natural body for just a little longer.

Buying that shirt that seemed tailor-made for your body, that makes you look like that corporate boss-lady from that Hollywood film – but as soon as you get to work, keeping your blazer on for as long as possible even in blazing heat, only to pinch your shirt away from your body, loosen it up as much as you can, when you do take off the jacket. Your male colleagues, on the other hand, don't even know the feeling of finding slim fit shirts too “body-hugging”. They would probably be at a loss for the very meaning of the term.

We can't seem to wear or do anything that quite fits the fluid Indian idea of 'modesty', so, maybe, the definition is the problem, not us. It's time we give our hands and minds some rest, embrace the world with the resplendence of our bodies and the full allure of our styles, absolutely oblivious to anybody else's opinion! And world, do as the video says, and just “let her be”.