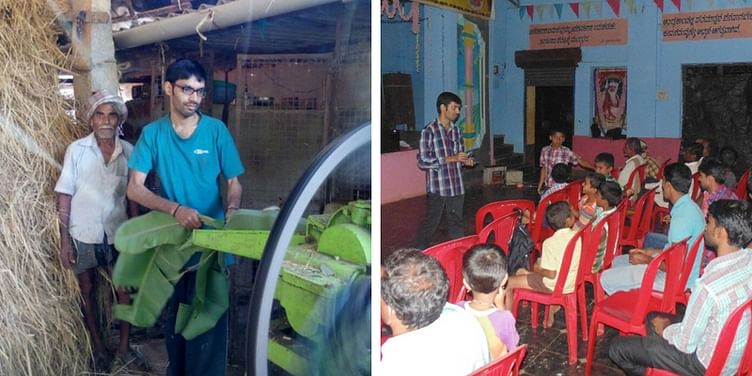 Through their independent consultancy company, these educated farmers are setting an example for rural youth to stay back in their villages, hold their agricultural lands, and still earn a decent living. Self-sufficiency is what they sell.

“We’re trying to help the people who want to stay back in the village, the farmers who don’t want to sell their lands, to get a good income,” Srikrishna Hegde Ullane arrives at the point three seconds into the conversation. He’s very clear about his intent – eliminate the migration of educated youth into the cities and improve rural living conditions. This, however, is not his first attempt at doing so.

In 2012, Srikrishna founded ConnectFarmer, an online platform that serves as a marketplace for farmers to sell their value-added products of agricultural produce by eliminating the middleman. While growing up and especially after completing his education, Srikrishna noticed that the decision to move to cities was a trend that was dangerously picking up. Supporting his concern is the disconcerting data: in 2011, 70 percent of the Indian population lived in villages but this number has been decreasing ever since that survey. The population declined to about 67 percent in 2015 and is still plummeting.

A dearth in remunerative farming is one of the reasons for migration that 27-year-old Srikrishna has already tackled with ConnectFarmer. For five years now, farmers in North Karnataka have been seeing better profits from their produce, which has, in turn, incentivised many to continue farming on their lands and not, instead, sell them out of compulsion and migrate to cities. The second and biggest reason for this migration and brain drain is the lack of employment opportunities for the youth in the villages. And this is where Srikrishna’s Ullane Business Consultancy comes into the picture.

What is creating the need?

The gap in literacy levels between villages and cities has been reducing, which, albeit being a good thing, is fuelling this migration. Competent and educated youth come to cities looking for employment that matches their qualifications because income from agricultural produce is just not enough. “I have seen many graduates very much interested in coming back but they don’t have an option because they’re small land holders. So they won’t be able to sustain a decent living,” he sheds light on a difficult situation. “It’s a real dilemma.”

With the digitisation of rural banks and post offices, there is, if only a small, vacancy created. While some find these a good source of secondary or even primary income, there is still a majority of people who are forced to migrate.

Freelancing from their villages, then, seemed like a good option for this group as it allowed them to simultaneously work on their farmlands. But this, however, wasn’t fruitful as building a good portfolio is no easy task. Because of high competition on freelancing websites, the number of projects they acquired each month was much lower than what they were capable of handling. Dissatisfied with the income again, some decided to move to cities for better opportunities.

Better income, however, didn’t disguise a frustrating truth; they were still doing the same work they could be doing from their home, in their villages. “So we started a collective effort to get all the work on a collective brand name called Ullane Business Consultancy so that we can outsource all the work from Bengaluru and work on them together,” says Srikrishna.

Although along the lines of a rural BPO/KPO, Srikrishna stresses that this is a social experiment of its own kind for one valid reason; unlike rural BPO’s that are set up by parent companies in cities for outsourcing work, this is an independent consultancy that is set up by the farmers themselves. So, it is a solution that is not presented to them but devised by them, making it more effective and relevant to the rural and cultural setting.

It has all the advantages of freelancing and even goes a step ahead. This collective brand name, as Srikrishna explained, has significantly improved their chances of acquiring clients, something that freelancing individually would not have achieved alone. Six months into operation, they now have over 70 clients and still growing. Located in Siddapura, they offer mainly KPO services such as accounting, income tax consultation, payroll management, startup counselling, marketing consultation, and data entry services among others.

A model to replicate

“I want to see this kind of effort all over the country. If you provide people with alternatives then they will no longer have the need to leave their native land,” Srikrishna says with conviction. “Anyone with a competent skill can start anywhere in the country and become self-sufficient.”

The only challenge they faced initially was building a good network of clients. Despite having an online presence, working from villages presents the problem of remoteness. “It’s a slow process but with a brand name, and a little bit of marketing and organising, you can get started with a secondary source of income,” he assures.

Rural BPO’s have been building momentum and in their wake, creating job opportunities since 2005 when Lason India first started outsourcing to villages in Tamil Nadu. But like any experiment, its biggest challenge so far has been the lack of good infrastructure to sustain a business in this world of information technology. Is this not crippling Srikrishna’s efforts?

“There will always be power outages,” he explains. “But currently we have a small Taluk office in Siddapura with a UPS backup and good internet connectivity,” so the members have a place to work in case they face power or internet problems in their homes.” Moreover, with mobiles now enabled with 4G internet, staying connected is easy.

With ConnectFarmer as an umbrella organisation to implement new experiments such as this, Srikrishna is striving for a future that Gandhi envisioned – self-sufficiency in villages. It is villages, in fact, that have a better chance at achieving self-sufficiency as they have stronger and deeper roots in their cultures as opposed to cities.

“I am a passionate social entrepreneur and I want to solve all the problems of the rural community, but it is not possible for an individual to make such a dream a reality,” he says, wanting to spread this message, that “migration is not the solution,” and that there is always an alternative. If, as he wishes, more people join his efforts that are levelling the playing field in terms of opportunities, then hopefully, it won’t be long before rural India is once again empowered.