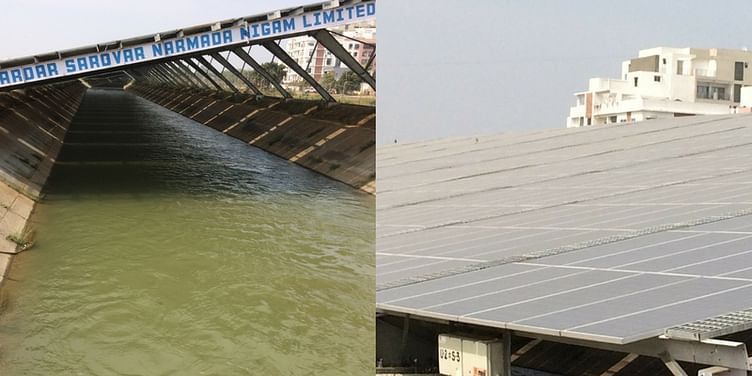 Renewable sources of energy have always been undermined by lobbying groups and other forces but the climate change is a constant reminder for mankind to move towards cleaner sources of energy. And now, solar energy has reached a critical limit where the cost of production has gone down and the platform has been created to more adoption which will only lead to a cleaner future.

Extreme Tech reports that mainstream solar cell technologies are still based on inexpensive silicon designs and have a maximum theoretical efficiency of 34%, but the real life performance is around 22%. And as it turns out, that might be good enough to make solar power viable.

Our search to look at impactful developments in India led us to Gujarat Government’s project of putting solar panels over canals. The idea was implemented in 2012 and our visit to Gujarat suggests the project is going strong. Here are pictures from Sama Savli in Vadodara:

India has aggressive target to achieve 100 GW of installed capacity of solar PV plant by the year 2022. If all the plants are installed at one place, the land occupied shall be 1.5 times more than that of the state of Delhi. Here are some of the finer details about the project:

This is a great idea for implementation across the world. The Government intends to produce upto 100MW via this project and it is imperative to move quickly to reach the desired target of 100 GW of installed capacity of solar PV plant by the year 2022 (read detailed report).

As of December 2016, India’s solar grid has a cumulative capacity of 9 GW and it intends to touch 15GW by March 2017. For more information on the state of renewable energy in India, visit Ministry of New and Renewable Energy.