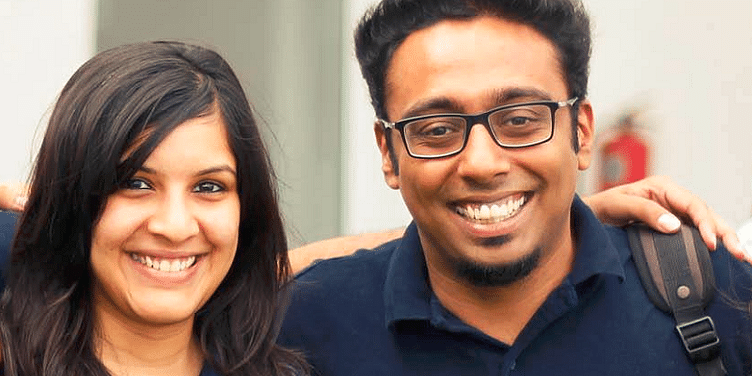 Globally, companies are estimated to lose hundreds of billions of dollars every year due to customer defections and abandoned purchases as a result of poor experience.

The story of Rashika Jain and Karthik Bhandary is the story of the millennial generation and fits the script to a T. Young and restless, they got bored with their corporate jobs no sooner had they landed them after getting an MBA from Chennai’s Great Lakes Institute of Management in 2014. They were not willing to confine themselves to a corporate career with its straitjacket culture. Instead, they wanted the freedom, independence and flexibility to chart their own career path.

The two waited in their respective jobs -- Rashika with a telecom service provider and Karthik with a distribution company in the Middle East – till they had an idea to launch their entrepreneurial journey with. Rashika maintained a diary where she had jotted down over 100 ideas and their execution strategy, and would discuss them with Karthik every evening over phone. Among the ideas discussed were education beyond schools and food trucks.

And then, the one idea that she had been looking for materialised out of a coincidence: Rashika found that she could not ship certain items abroad when ordered through an e-commerce site. This gave her the idea for a platform where information could be analysed, made coherent and meaningful for shoppers. She discussed the idea with Karthik, and the two quit their jobs to begin their startup career in Kolkata in December 2014.

The company is currently working on a technology which will help consumers understand where to shop on one hand and on the other help businesses understand what the reviews mean for them. Rashika, co-founder of Weblistr, explains,

“There are so many businesses that need real reviews of their product and have no way of knowing what reviews mean. Even consumers need trustworthy reviews.”

In August 2016, Karthik began building the technology while Rashika went about finding businesses that could use their platform to garner reviews and insights. For new businesses, the platform takes up their reputation management; it interacts with customers using the services of the business. The technology understands why customers are raising tickets and the platform addresses the queries quickly. Karthik, Co-founder of Weblistr, says,

“We are creating a platform that can crunch customer information for digital businesses and ensure that they reach the right customer.”

While the B2B side is a paid service, the startup allows consumers to visit their website and review websites that they have shopped on.

For instance, let’s say the business is a skincare brand that has been garnering reviews across all market places and online channels that its sells in. Weblistr can address customers and create dashboards out of all the reviews in place. The platform also allows the business to route more consumer traffic to its site.

But are these reviews really efficacious? A study conducted by Genesys, a customer service company, found that the cost of delivering a poor customer service experience is quite staggering. The study, which covered enterprises in 16 key countries, says that the companies surveyed lose close to an estimated $338.5 billion each year due to defections and abandoned purchases as a direct result of a poor experience. The study also found that nearly 70 percent of the consumers had ended a relationship due to poor customer service.

The study also suggests that companies need to become more personalised in their overall treatment of consumers by integrating customer data and developing processes that recognise the value and history of each customer.

No wonder then that the likes of Zendesk, Helpshift and Freshdesk have become some of the most respected companies in the world. Unfortunately, in India, the three million SMBs (in manufacturing) that are online have yet to harness the digital world to their cause. A lot of the modern businesses are moving online and need discovery, needs that Weblistr wants to address. “The digital world gives you a lot of feedback and new brands should leverage it,” says Rashika.

Weblistr wants to work on a B2B model as a paid service, where it helps businesses discover what reviews mean to them and also track their customer experiences. The B2C side will not have any money being charged. Naganand D, CEO of IdeaSpring Capital, says,

“Such businesses need to focus on value generated from the technology. They have to ensure that they cannot just aggregate and present customer data in a dashboard; the technology must provide insights fast and generate value for business.”

In India, there are 47 million SMBs that could go digital by the end of 2030. Although the opportunity is large the movement towards digital transformation is still very slow.There are around 691,000 websites in India but beyond the top 1,000, not all of them have a customer relationship and review management system. It is this section that presents itself as a massive opportunity for Weblistr. Being a technology company they can even service customers abroad with their APIs.

The founders have invested less than Rs 10 lakh from their own pocket in readying the product. It has garnered over 7,000 reviews on its B2C platform. But it is the B2B business that is going to bring in the revenues on a steady basis once Weblistr starts acquiring clients. The company has been in operation for the last seven months and is yet to generate any significant revenues.