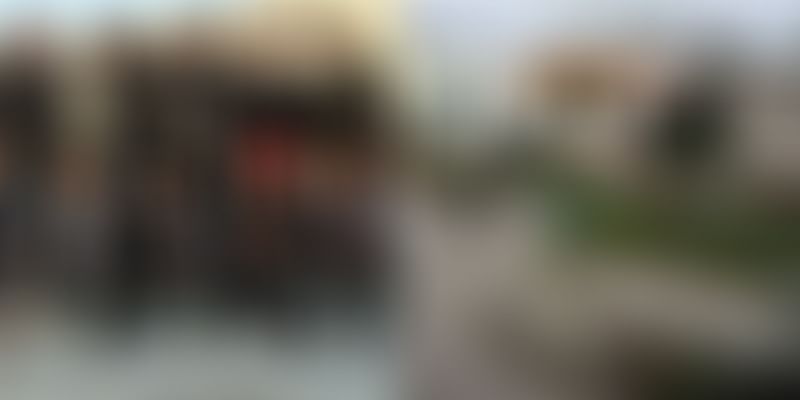 BITS graduates took on the challenge of restoring the school under a campaign named School Chale Hum.

As Nelson Mandela said, “Education is the most powerful weapon that you can use to change the world.” But what happens when the basic foundation of education — the schools — are in a dire predicament?

Rajesh Yadav, who had just been appointed village headmaster in Ambari, Uttar Pradesh, in 2013, found his school in a state of disarray as his students were being deprived of the basic infrastructure. To solve the problem and bring about a change, Rajesh looked to a couple of fresh BITS Pilani graduates for help, and soon Pranjal Deep (his nephew) and Navkaran Singh took it upon themselves to restore this deprived school through a crowdfunding campaign.

The plan to help this primary school in Ambari came to light when Pranjal and Navkaran were once discussing how fortunate they were to have had access to good infrastructure during the course of their education. That’s when Pranjal remarked about the plight of school in Ambari, his maternal village in Azamgarh, Uttar Pradesh, and how students were studying without the basic amenities such as desks and benches.

Outlining the condition of the school, Navkaran points out, “When the new headmaster joined the school in 2013, the total number of students in this primary school was just 30.”

“The school was without a boundary wall, making it a grazing ground for animals in the day while at the night, it had become a drinking place for local vagabonds.”

Improper maintenance and a lack of funds had caused this prathamic vidyalaya to become completely run down.

Bringing back the glory

Therefore, in an effort to restore the lost glory of the school, the newly appointed headmaster took it upon himself to change the circumstances for the better. With monetary assistance from the teachers of the school, he was able to build an outer boundary wall, ensure power supply, and renovate two blocks of the school. Though the government provides an annual amount of Rs5,000, it was barely enough to meet even the basic maintenance requirements.

Highlighting the problems while seeking assistance from the government, Navkaran says, “During the last two years, the school had asked for additional help from the government but there was no response. Therefore, the headmaster and teachers of the school pooled their money for the maintenance to ensure smooth functioning of the school. One cannot wait for the authorities to provide funds as it’s the students who suffer ultimately.”

To everyone's delight, the combined efforts of the school staff have not gone waste as the restoration of school has resulted in a sudden rise in enrolment, with the number shooting up from 30 to 220.

A campaign for a cause

School Chale Hum seeks to provide basic amenities to the school. And the primary concern of this campaign is to provide desks and benches in the every classroom. “The school does not have desks or benches for primary students and the students sit on the floor to study. During the winters, it becomes very cold and unbearable for the students. Therefore, providing desks and benches becomes our primary concern,” says Chinmayee Bhamburkar, a BITS Pilani graduate who has recently joined the campaign team.

Other than this, the school also lacks a library and proper teaching tools.

A major hurdle in the way of school restoration is the paucity of funds. To ease their way out, the BITS Pilani students have created a crowdfunding campaign, through which they plan to raise a sum of Rs 3 lakh.

Furthermore, this group has helped some other students and educational institutions. As Navkaran highlights “This is not the first time our group has successfully raised money for development in the education sector.” Earlier, they had successfully raised Rs1.3 lakh to support the education of an auto driver’s daughter in Pilani. They had also provided power backup for a slum school in Hyderabad, and raised Rs 50,000 to provide solar lamps to students of the fishing community in Surathkal.

The campaign highlights the plight of education in our country in general. However, this group of young and passionate minds from BITs Pilani is truly making a difference in lives of children in the small hamlet of Ambari.

As Navkaran points out, “This is not just a situation of one school but many such schools do exist in India. Each one of us could look around in our vicinity and help bring some change in these schools. In the end, it is education which can solve many problems that surround us and the society at large.”