iBlocks engineers design robots that can teach kids to dream 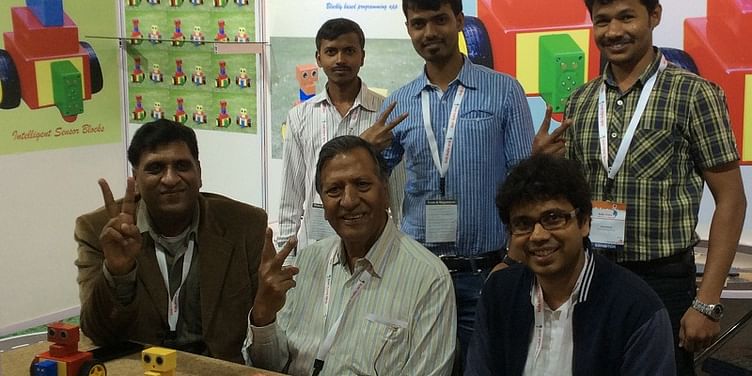 The toy market is only $3 billion in size in India, with 95 percent of the market being unorganised. iBlocks wants to disrupt this with its intelligent robots lessons.

If you go into one of the bylanes of HSR layout, a residential suburb of Bengaluru, you will find a house where robots come to life.

Victor Frankenstein, had he been around now, would have approved of iBlocks' products, and would have shared a sinister laugh with the creators, gleefully remarking that “they are alive”. Brothers Ravi Prakash and Vinay Prakash, and Rajneesh Bajaj, the founders of Ravin Technologies, which owns iBlocks, are three engineers who graduated in the nineties. They worked in corporate information technology centres for 17 years before deciding it was time to build robots for children.

In 2014, they founded iBlocks, which creates interactive robots that allow kids to use smartphones to build programmes, and also update their robot toys with programmes like movement, and voice-activated commands. They also perform mobility tasks in maze-like structures.

"We are building IoT for kids, and with toys that are connected we can teach them at a young age about IoT," says Vinay.

Gartner predicts that more than 10 billion devices will connect and talk to each other in 2017. In a world where robots are replacing many manual tasks at a rapid pace, it's only prudent that we also teach our children about them. The learning is to not see them as enemies—as machines that will replace man—but to enable our children to programme them to rid their lives free of mundane tasks.

According to Markets and Markets, the robotics market is worth $79 billion in size, and most of the applications are in manufacturing. The toys market in India is $3 billion in size, with less than five percent in the organised segment. A curious observation is that not one Indian toy company has merged programming, robotics, education and fun in one package. Most robot applications are expensive; they start from Rs 25,000 and go up to Rs 50,000 or more. This market is dominated by Lego, and it serves probably less than a percent of the market in India. With this in mind, the trio went ahead to build iBlocks, 'robot friends' for children.

In 2012, Ravi and Vinay decided to become entrepreneurs. Since they had kids too, they realised that the toys market was booming, and could be served better by curating toys online. They quickly launched a portal called Kidsgiggle.com.

At one point, there were more than 20 e-commerce companies focussed on kidswear. First Cry bought Baby Oye recently for Rs 362 crore, and most other companies have wound up or scaled down operations. Similarly, Kidsgiggle too went out of business. But the two brothers were clever enough to open a Rs 5,000sqft store under the same name, while the e-commerce business was running, to also test out a brick-and-mortar model. "The store is highly profitable and turned into a success," says Vinay. The stores make around Rs 4 crore per annum. Buy the dotcom store was shut down. The store initially opened as a warehouse for the dotcom business. They had invested at least Rs 60 lakh into the business in 2013-14.

However, the IOT and robotics idea came about when Vinay and his brother faced problems of not finding toys for their kids that were interactive and educative. Most were repetitive and cumbersome for kids. "The store gave us enough knowledge to understand how parents were struggling to find new-age toys that were inexpensive," says Vinay.

They contacted their old friend Rajneesh, who was a computer science expert, to ideate with them about creating magnetic blocks with sensors, which when attached became robots. The concept, at the time, was to also make these robots listen to commands through smartphones. Between 2014 and 2016, the company went through many iterations of the product. "We wanted to compete with the best globally. We could not make a toy that worked on simple stop-and-go features," says Vinay.

The three engineers built a robot that can do tasks, like verify a path and choose the optimal route to manoeuvre it. The manoeuvring part is programmed by the kids who learn from a set of tasks provided on the iBlocks app.

Ecosystem veterans stress the need to not get comfortable but keep innovating and introducing newer content periodically. "These niche businesses need to keep adding more learning and content on their platforms," says Mohandas Pai, MD of Aarin Capital.

The future of the toy market is in specialty toys that are affordable. In fact, these robots from HSR layout cost as low as Rs 5,500 and cost under Rs 12,000 for high-end applications that train kids in software and logic.

We have all tried the brilliant videos of Byju's Classes; imagine kids learning math with an app and making robots with an app. It's a powerful thought in the Indian market. The product is made completely in India and is making toys a much more interesting market. "The advantage is kids can learn from their app itself if it is interactive," says Naganand Doraswamy, CEO of IdeaSpring Capital.

The future to influencing robot building kids begins in Bengaluru, and iBlocks has started it first. We have commercial robotics companies like GreyOrange Robotics and Grid Bots. But none, yet, in the toy market. The competition is Mattel, Lego, and other Chinese manufacturers who are looking at India as a market. The only thing left to be seen is if Indian entrepreneurs can introduce design and art into building robots, like the famed Gundam Toys from Japan and Korea. That's when we can have true winners with our expertise in software and design.