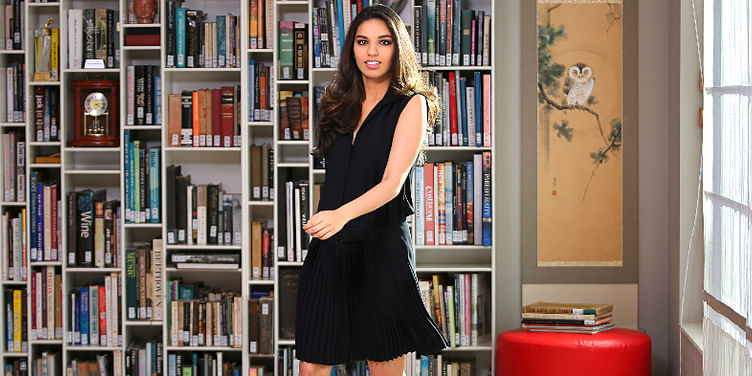 The 22-year-old art graduate, fresh out of the US, was looking at an already locked in destiny, as the heir apparent to a 129-year-old business. Manasi Kirloskar had two options – either to revel in complacency and get around to checking off her towering list of responsibilities just a tad later or to get cracking come Monday.

As the fifth generation of one of India's foremost business families that had already concocted the elixir for their survival, Manasi again had two options – cruising on in autopilot to keep the business buoyant, or to permeate it with her own frenzied strokes, to make it soar.

The artist and entrepreneur in equal parts had two options while defining her career – to run the empire she was to inherit or to look for even more direct ways to benefit the subjects.

There is an obvious, safe, and practical choice; and then, there is Manasi Kirloskar's way of life. Get to know what stones the heir of one of India's largest business empires has turned since she took to the castle four years ago, as she narrates her journey to YourStory in an exclusive interview.

The three uptakes of her life

Manasi studied at the Mallya Aditi International School in Bengaluru, and graduated in Fine Arts from the Rhode Island School of Design. But three childhood experiences had already set her on course towards her purpose in life.

The first incident taught her that a heart on the sleeve instantly attracts magic in one's life. With art collector parents who had an impeccable eye for artifacts on their travels, Manasi has been painting for as long as she can remember, on any and every surface she could lay her hands on! “They would never get upset if they caught me painting at a time when I should've been studying for a test or exam! So I always knew that it was something they deeply valued,” she says. At the age of 13, she had her first solo painting exhibition in Bengaluru, which was attended by M.F. Hussain himself. “It was my mom who encouraged me to paint, and she organised the exhibition. She made me believe that love for painting had value, and made me super excited about showing my work to the world,” she recalls.

The second incident was a testimony to the power of hard work to rise up, no matter how much of an underdog one is. This lesson was no rocket science, but it was 8th-grade math. Like for most students, math was the stuff of nightmares for Manasi. Her teachers weren't too fond of her either and even insisted that she was not going to clear her board exams. "'Who are they to make this assumption?' I thought! I got myself a fantastic tutor and worked extremely hard, day and night, and got an ‘A’ in my boards! I understood that hard work can make anything happen! Although my teachers' lack of faith motivated me, I still believe that a good teacher always inspires his or her students,” she says.

The third and final episode showed her the joy of giving. At age 14, she started teaching arts and crafts at an NGO called Christel House Foundation, a private school for underprivileged children, as well as other government primary schools, and at an orphanage run by nuns who had adopted abandoned and abused girls. “Working with these children was a life changing experience. I witnessed India's harsh reality, and in that instant, I promised myself that I would dedicate a good part of my life to giving back to society and improving lives,” she says.

Starting to build her Rome in four days

Being the sole heir, Manasi was conditioned as well as poised to assume the reins of the empire someday. And she was always aware of what the suffix "Kirloskar" meant – its significance in the corporate sphere, as well as the family name's prestige in society. “Growing up, I never anticipated the pressures that the Kirloskar name would entail at work. I am lucky to have parents who supported both my joining the family business and my pursuing my own dreams and career goals. It's about maintaining the right balance between my own dreams and the ‘ready-made’ business. I was pretty confident, but when I actually started working, post-college, I started to feel the pressure,” she says, for she was ready to swing into action immediately after she returned from Rhode Island, but encountered some turbulence during the transition.

"I didn't even realise that it would happen so quickly! I remember returning on a Thursday and my father telling me that night that I had to attend my first board meeting of our holding company – Kirloskar Systems – the following Monday! I even had to make a little speech! I think I was a little too confident and finally touched ground a few months later," she recounts.

Shadow of a clout

The Kirloskar name turned out to be a double-edged sword, one that was creeping up on her, drawing closer the deeper she got into her career. She slowly realised how people had preconceived notions of who she was, how she would behave, and what her style of working might be. But even with that sword hanging over her head, it was ensured that her journey would not be riddled with the gendered hardships that other heiresses of business families have confessed to encountering in getting their due credit and being taken seriously. Being from a family where women going to work was commonplace – her mother has been a professional, her grandmother was on the board of Kirloskar Oil Engines and also Vice Chairman and MD of the Blue Diamond Hotel in Pune, and her great grandmother was also on the boards of various Kirloskar companies – this was one hurdle that Manasi did not have to face.

“My father and mother have an equal status at home. I therefore never faced any resistance. The only time they probably doubted me was when they may have wondered how a painter was going to run a business. I felt like I had to conform to expectations,” she recalls, adding, “But finally, last year, I realised that I have to be myself and embrace my own style of working. I think it's important to change working patterns with each generation in a family business, and especially an old one – I'm the fifth generation! I'm happy that I feel comfortable and confident to just be me,” she explains.

Case in point – her own art house-hysteric take on the first project she was deployed to, under her mother, another powerful scion of the Kirloskar lineage, Geetanjali Kirloskar. This was the brand new tertiary care hospital they were building, Sakra. "She is a tough task master, and treated me like any other employee. I was made in charge of all interiors – medical and non-medical. It was on-the-job learning for me. I was made accountable," Manasi recalls.

The Kirloskars are perfectionists, and held Manasi to the same standard from Day Zero. When she joined, Sakra was still under construction. "It's totally different from any other hospital! I took a huge risk by making the interiors very colourful. I thought it was important to have an environment that was not intimidating. Hospitals are depressing, but Sakra is not. The playful colours of the walls and patterns in the vinyl flooring truly ease the pain! This was a huge risk, and I faced much resistance. But when we saw how much the patients appreciated and enjoyed the colour and vibrancy, everyone was happy!”

While it is very tough to be a successful corporate hospital, as hospitals in India have a tough time allocating financial resources and maintaining stock, she believes that Sakra is creating its own space with high-end medical equipment and operating theatres. “We have alert medical care and transparent billing, which is important for patients who require complex surgeries,” she explains.

"The process of making quicker and tougher decisions has been my contribution so far," she reflects.

Now serving as the Executive Director of Kirloskar Systems Ltd., she has also started, and now spearheads, their real estate vertical. Her first residential project is a Rs 1,500 crore one in Bengaluru’s most prime locality, and will be completed by the end of this year. She also recently acquired another plot of land to start her second project, for commercial spaces, which is worth almost Rs 1,200 crore. “I like to take conservative risks and not take loans. All my projects have been funded through internal accruals,” she explains.

On the anvil is a rural healthcare project she is working on, and soon, she will be ready to announce her social impact startup called 'Caring with Colour'. “It's something I've been wanting to do for the past ten years, and it's finally happening!” she lets on.

“About 85-90 percent of the Indian school-going population attends government primary schools, which is where CWC will unfold. We will teach the arts in a way that will help kids improve in their academics and improve the attendance ratio, use the arts as a tool to diagnose specific kinds of mental issues, and then use arts as therapy, and finally, encourage kids from the age of 14 to start ‘giving back’ to society and engage in community service. I would like to encourage every single high school in India to include community service as an integral part of the high school curriculum,” she explains.

In the meanwhile, she wants to scale her real estate ventures to create environments that support the growth of India.

In spite of having so much going on, Manasi insists that she leads a very simple life. On a typical day, she leaves for work at 8 am, gets back home by 7 pm, works out for an hour, eats with her parents, and hits the bed early. “I also travel a lot – almost every week – and I love that! I enjoy visiting factories and offices of those in different industries,” she says.

The artist in her wasn't channeled just through painting; she has been training in kathak since a young age too, and has delivered two kathak stage performances. She has also learnt how to play the tabla, and took Hindustani classical singing lessons. But painting remains her favourite form of expression. “I will never give up painting! Ever! I hope to create enough good quality work to have a painting exhibition this year,” she reveals.

“I think that for someone in a business family, it's easy to feel confident even before starting work. But no one is born with skills of core businesses. Learning things from the ground up, which is how I've been trained, has been an eye-opener. I get weighed down by existing responsibilities, and finding time to focus on my dreams and passion can be challenging. But I maintain a balance between responsibilities and my own career path and choice,” she says.