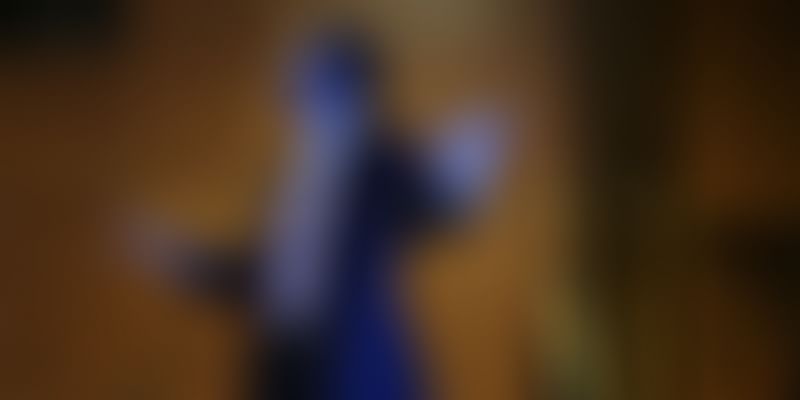 In the contemporary world, it is difficult to find a lot of people who would defy the odds, face their fears, take on challenges and beat mediocrity. It is no surprise that such people, rare as they are, often meet with success, and that their stories are sources of inspiration for many. Time and again, they have proved to us all that hard work never goes in vain.

This is the story of a English teacher who is adored and respected all over the city of Visakhapatnam. What may surprise many is that this renowned teacher was once also humiliated for not being able to speak English, as he was from a Telugu-medium school, where lessons were issued in the regional language of Andhra Pradesh. As he was a South Indian, he was called a 'Madrasi', and was bullied and beaten up badly when he was studying in Delhi.

This is the story of Ram Mohan Adibhatla, the ace English teacher from Visakhapatnam who is now an expert in coaching students who aspire to crack the GRE, GMAT and other competitive exams.

Born in Madras, Ram was the youngest among four children. His father was a graduate of BITS Pilani and his mother didn't have the opportunity to get an education. He says,

My father was a graduate of BITS Pilani (it was known by some other name then) and my mother was nominally illiterate, but taught herself so much, especially history, the Upanishads, our great epics and the Vedas, that she made many otherwise ‘educated’ people look ignorant.

When Ram was five years old, his father, who was a government servant, was transferred to New Delhi, which proved to be traumatic experience for him. In his own words, he says,

The attitude amongst Northern Indian children then was such that any child from Southern India was ‘Madrasi’ and deserved plenty of contempt and the occasional physical beatings that children carry out so cruelly and casually. Many times, I would come home bleeding from the bullying, and my mother would be aghast, thinking that it was probably my fault (She was a gentle, almost timid, and caring person. I think she found it improbable that other children could be cruel just because she thought me a little too mischievous for my own good).

He was enrolled into a Telugu medium school as his father could not afford an English medium education for four children with a salary of around Rs 500 a month. This was when Ram learnt the thrill of surpassing his fears. He took on a bunch of boys who bullied him this time, counterattacked, and saw them run away. Ram says,

To my astonishment, the bullies simply ran away. So, in many ways, a part of my character has been hewn on the streets of New Delhi. Even today, I don’t hesitate the least if I need to counterattack - intellectually, physically or emotionally.

Ram was studying in the 6th grade in a Telugu medium school, and for the first time, he had English. When he tried to answer a simple question in English, the teacher (a Telugu lady) asked him to shut up because he was speaking 'butler' English.

Humiliated beyond description, I hated her with the purity of heart that only a child is capable of. I was actually wishing that she would die.

With his father transferred back to Vizag in 1971, Ram joined an English medium school.

To my utter dismay, my father joined me in an English medium school. The teacher (a wonderful Punjabi lady) asked me to introduce myself to the class. I was so terrified, disoriented and lost that all I could manage was to stammer, stutter and break down openly. My teacher was an absolute angel. She hugged me and kept muttering soothing, encouraging words. Later, she asked me to start reading books. I so wanted to know English, and so desired to please her, that I became a voracious, and obsessed reader within the next six months. Reading became the drug that made me euphoric and infused a sense of knowledge and power within me.

The next thing he knew, Ram had read as many as 3,000 books, and there is hardly any topic or subject that would be entirely new to him.

It isn’t surprising that English and knowledge are my twin passions, and have been the cornerstones of my livelihood for the last 22 years. Two teachers, one a monster and the other an angel. That’s the power teachers wield. By the way, I still haven’t forgiven the first one.

Eventually, he fell in love with alcohol around 1994, and that brought him down in the worst possible way he could ever imagine. There were times when he would sober up till the end of the last class of the day. Then, he would hit the bottle back at home and pass out.

My constant companions were guilt, fear and total helplessness, for I genuinely wanted to kick the habit but was hopelessly useless at doing so. Around 20 years back, on 1st January, I awoke almost delirious with fever, weakness and complete blackness about how I had spent the previous four days. I had reached the bottom of the abyss. Strangely, it was liberating. I told myself to either quit drink or quit life. I chose life.

In many ways, he was reborn. Since then, his profession and students became the pillars on which he constructed the edifice of his life. Classes became temples from which he drew inspiration, energy and vision.

Teaching itself became so cathartic that when there were no classes for more than two days, I used to panic. Even today, it is still the same, although with just one difference: My wife and daughter have collectively become the third pillar of my life. My daughter’s just 16, yet she is turning out to be my best friend.

Talking about his work, he says that he basks in the love and respect of his students and gets frustrated when they don’t give their best. He even weeps sometimes when they don’t reach their goals. He infers that his outlook on life is rather straightforward - "First and foremost, we need to know ourselves as much as possible. Life’s experiences themselves can’t teach us much because not all of them have the ability to move us."

That’s where books step in. Reading is the fastest way to understand ourselves and the world around us. Once we know that all of us are interrelated and interdependent, life becomes a daily pleasure instead of a chore.

Here is a video of one of his TEDx talks:

Right now, Ram is a popular teacher, mentor and friend that most of his students can turn to whenever they are faced by a moment of crisis, both personally and professionally. Fondly called as RMS (Ram Mohan Sir), his reputation for being witty and his knack for humour make him dearer to the student fraternity. Here are the three most meaningful quotes that he thinks are an unintended part of his life:

"If you can meet with Triumph and Disaster

And treat those two impostors just the same…" ~ Rudyard Kipling.

"Success consists of going from failure to failure without loss of enthusiasm." ~ Winston Churchill

"The man who does not read has no advantage over the man who cannot read." ~ Mark Twain.

This 56-year-old man's story is a perfect example of how one can win his/her own struggles in the difficult paths that they come across and how one can celebrate and rejoice the beauty of life as it is.