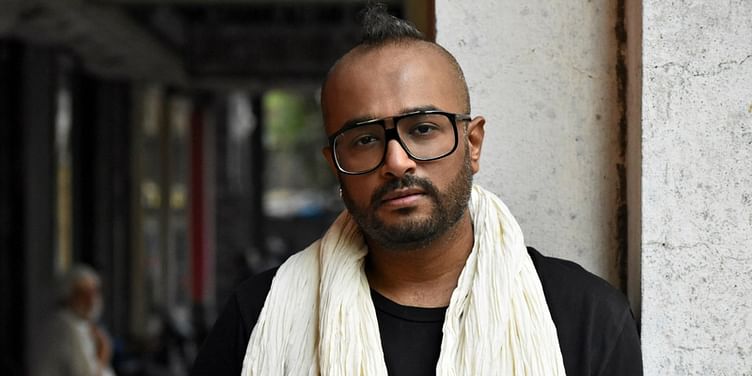 “My film is a political statement.” Sisak, with its furtive glances and timid gestures, hair-raising music and the chugging of the Mumbai local, silently retaliates against section 377 of IPC.

It was December 11, 2013. Faraz Arif Ansari sat in a quaint café nestled in Nainital, on what seemed like an uneventful day. The news was turned up, competing with conversing voices, and what Ansari heard left him hollow. The Supreme Court had recriminalised homosexuality, upholding the infamous section 377 of the Indian Penal Code.

“What do I do?” was the thought that ran through the mind of this devastated 30-year-old filmmaker whose sexual orientation was now punishable. With an overwhelming urge to do something, anything, he did what a filmmaker does best – weave a story.

“The first image I saw in my mind was of two men who are in love, but unable to talk.” And in three hours, Ansari had the screenplay of what would become India’s first silent LGBTQ love story. “When I read the screenplay a week later, I realised that first, these men are not talking, and second, there’s no physical interaction at all,” he recalls.

Sisak was never intended to be a silent film, as Ansari goes on to explain. It simply, and naturally, took on the form of an agonising reality of homosexuals that was to follow the SC judgement. Sisak, which adorns the Urdu connotation of a cry caught in the chest, became the voice of a community that was silenced.

With furtive glances and timid gestures commanding the narrative, Sisak is the story of two men who meet and share a silent, and hence tormenting, love in the few minutes that they spend in the local Mumbai train every day. But depicting such a story, in such a manner, and transforming three years of work into a 20-minute film, can be quite a journey and as Ansari exclaims, “A crazy experience!”

The making of a silent revolution

“Before filming, I didn’t have a producer on board; almost every production house had turned me down. So I was worried about the money. But I desperately wanted to make this film,” he recalls, the earnestness in his voice reflecting a passion that has grown with a four-year-old boy who set up plays casting his dolls and action figures, and knew from that tender age that telling stories was all he ever wanted to do.

Waking up every morning with only Sisak on his mind, Ansari decided to take a big scoop out of his savings to make the film. “I think you have to take a risk in life. Mira Nair, the filmmaker, sold almost everything she owned to make Monsoon Wedding, and if she can sell even her underwear then, I told myself, that I have to do it,” he quips. “What else can you do if there are people who don’t want to back your film?” And with that, Sisak became a film that was mostly self-funded and partially crowdfunded.

Ansari encountered similar challenges even post-production. Although his film was lauded by the celebrities he approached, they were, as he found out, uneasy being associated with, and promoting an LGBTQ film. There was, however, one celebrity who was more than willing and enthusiastic to promote Ansari’s film. “She responded to me immediately and said she would do anything that was required to help the film. I’m really grateful to Sonam Kapoor,” he says.

After completing pre-production in six months, Ansari had before him a challenge that now seems too ludicrous to take on – shooting an intimate silent film in the famously crowded local trains of Mumbai. Between fits of laughter, Ansari recalls how the entire cast and crew tumbled between stations and platforms, with equipment as baggage, to catch the train that was the least crowded in the late hours of the day.

“My actors would change behind dupattas in the corners of the train,” he recalls. “And we didn’t have the money to get the permission to shoot on the train, which costs Rs 6.5 lakhs for three hours!” So, Ansari and team filmed guerrilla style, sneaking their way through the platforms while pretending to be exorbitant tourists. “It was absolute madness,” he says, in splits. “We have been bruised and we have bled to make this work.”

But Ansari fervently believes that the universe too was somehow an accomplice in the success of his film because of one incident he recalls with clarity,

Between Bandra and Lower Parel railway station, the electricity in the train switches between AC and DC, and because of this the light is constantly flickering. I wanted to use this for the film but there was no way of timing it. I had given up when, while shooting the climax, looking through my camera, I saw the lights yielding to my wish.

The making of a filmmaker

Ansari, hailing from a non-film background, studied film direction and screenplay writing in University of Pennsylvania and has since then made his presence known in the film industry for eight years.

He has worked as a Writer, Associate Director, Casting Director, and Executive Producer on films like Amole Gupte’s Stanley Ka Dabba, Sonam Nair’s Gippi, and Deepa Bhatia’s documentary Nero’s Guests. In 2015, he wrote, produced, and directed a short film called Siberia, a story about a schizophrenic woman tormented by the presence of a massive rat, which won him the Dadasaheb Phalke award, the country’s highest award in cinema.

Unmistakable in this trail of work is Ansari’s palate for good cinema. “My films will always be about starting communication or opening up a dialogue about things that’ll make the world a better place,” he says, acknowledging the fact that cinema now is more than entertainment, and that it is absolutely necessary that it contributes to the social structure.

I personally think a filmmaker is as powerful as the PM of any country. While the PM is working on the conscious understandings of the country, the filmmaker is working subconsciously. As a filmmaker, you’re ultimately changing the way people eat, think, dress, and talk. Everything is affected by cinema. Why would you have such a powerful tool in your hand and not use is wisely?

When it comes to the film industry, Ansari doesn’t shy away from voicing his objections. “People are so scared to support or even make films that can take on the burden of being responsible. It’s a very fine balance, making an entertaining film that is also socially and politically relevant. And that is the gap that I want to fill as a filmmaker.”

The dialogues created by silence

Ansari’s efforts to create films that also serve as food for thought, hasn’t gone in vain. Speaking of the public’s response to Sisak, he recalls an incident where a man in tears told him that the film felt like a slap across his face. When a perplexed Ansari asked why, the man explained that being homophobic his entire life, he somehow felt responsible for the pain felt by Ansari’s characters.

People have even asked me what LGBTQ is. But this is good. The dialogue on this has further opened up, and people are finally starting to question the absurdity of such a law.

But the most rewarding of responses, according to Ansari, are the ones where people told him that Sisak was their story and their experiences, and that it’s not two men they saw but instead, two people in love. This, Ansari says, has driven home the point that love is the same for all, and denying a community the right to express it, is unreasonable and wrong.

Ansari is currently writing his new feature film called Surkh which tells the story of two men in love, but this time separated by the India–Pakistan border. “There are many unspoken romances in our life,” he says explaining how this movie, like Sisak, is an amalgamation of personal experiences.

Sisak will be premiering at Wicked Queer, Boston’s LGBT film festival, on April 6, 2017. “I think 10 years down the line, people will remember a Sisak,” he says, hopeful that the three years spent in detaching himself from conventional dialogue-centred, and stereotype-riddled Bollywood to create Sisak, will leave an unforgettable mark.