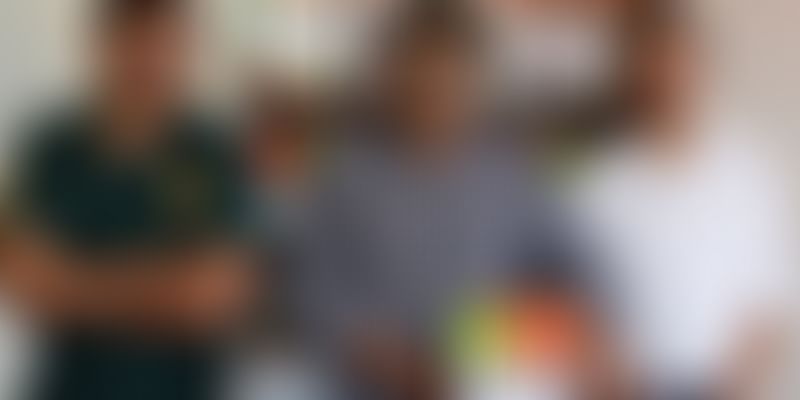 There is a very interesting phenomenon sweeping many an urban home in India. The residents of these homes — from professionals to housewives — imagine they are participants of MasterChef Australia, making complex dishes and earning the judges’ praise. Of course, most of us cannot make MasterChef-worthy world cuisine, but we really, really want to.

It is this want that the three founders behind Fizzy Foodlabs successfully identified in 2012. The company behind the brands Chef’s Basket and Colonel & Co is on track to reach revenue run rate of $1 million a month by the end of FY 2017–18.

Varun Jhawar, Co-founder and CEO of Fizzy Foodlabs, says he had a simple premise — he wanted to start a food company, but not in the services space as he wanted to build a brand with FMCG-like scale. Setting out on the quest to find the right business, he was joined first by his IIT-Bombay friend Nipun Katyal and later by another college mate, Manish Tirthani.

They realised that while the ready-to-eat space had seen the emergence of brands like ITC’s Kitchens of India, such products still served only a niche clientele. Indians opted for ready-to-eat when there was no other option or when they travelled abroad. “It was need-based consumption and not aspirational. India is a cooking market and there is a lot of guilt attached to just warming food and serving to family. We were eating out regularly and were trying out different cuisines like Italian, Thai, and Japanese and so was everyone we knew. In parallel, MasterChef Australia had become a hit in India. So we realised the ready-to-cook element was very important,” says Varun, who worked with Proctor & Gamble before starting up.

That’s how the idea of a ready-to-cook world cuisine brand — Chef’s Basket — was born. The trio knew they needed to check quite a few boxes to create a successful packaged food brand:

A call was taken right in the beginning that the company would do portion packing — this was a lesson Varun had learnt working in the FMCG sector where Rs-1 shampoo sachets had helped introduce the product to a wide audience. This is not a new concept in food either. The small Maggi and potato wafers packs have worked well in the Indian market. Says Varun:

Packaged food we knew was a big boys’ game. That's why you don’t see many startups in this space.”

Packaged food is a big boys’ game due to the many hundreds of moving parts that need to come together to create that packet-of-lip-smacking-goodness that makes the consumer come back for more.

Whether the pack is big or portion-sized, the intensity of work that goes into creating the product and the right taste is the same.

So the biggest challenge for Fizzy was to ensure a lean operating model where the quality of ingredients and products remained high but the costs would not be prohibitive. India has a history of contract manufacturing, with majors like Hindustan Lever, Nestle, and PepsiCo using third-party producers for years, ensuring high factory standards.

Many of these contract manufacturers have latent capacity and some had manufactured products like pasta and sauces for export as well. Working with these producers would mean that Fizzy did not have to spend capital on setting up factories. However, convincing them to work with an unknown company was a whole different matter. “It took us many months to convince them. But some of the suppliers who work with exporters understood what we were trying to do. So around eight suppliers agreed to work with us and they are still our partners,” says Varun, 30.

The other equally important challenge was getting the taste right. The trio had decided on Italian and Mexican as the two cuisines to start with. While Indian consumers have taken to such cuisines, the pasta we enjoy is very different from what is made in Italy. The Indian taste buds are attuned to a different level of salt, spice, and acidity — the three parameters that define taste.

They first bought packs of pastas, bottles of sauces, spices and condiments, and olives and cooked them to understand what could be made with the products available in the market. What the team realised was that home cooks had to contend with multiple instructions — the sauce pack gives one set of instructions, while the pasta packet says something else. So the team decided that like a Maggi pack, their Chef’s Basket pack would include pasta, sauce, and seasoning.

They also reached out to chefs in Mumbai, many of whom worked pro bono with Fizzy, to help them develop the right flavours, and Varun and company gleaned insights like Indians liked more sauce in their pastas. They would get a trial pack done with their vendors, come back to the chefs for tasting and feedback, and then get a fresh trial pack done. It took the team over 15 trials before finalising the first three products — arrabbiata and creamy tomato pasta, and burritos.

The preservative-free products, serving two and priced at Rs 250, were launched in June 2013 in Mumbai. Within 30 days the company was able to place its products on the shelves of premium modern trade retailers like Godrej Nature's Basket, Future Group’s Foodhall, and K Raheja Corp Group’s HyperCITY. By March 2014 Chef’s Basket was on the shelves of more mass modern retailers like Reliance Fresh, the Tata Group’s Star Bazaar, and Future Group’s Food Bazaar.

Varun says it was not too difficult to convince these outlets to give them premium shelf space. “The modern retailers were also seeing demand for international cuisine and knew the importance of portion packs. They saw the innovation and uniqueness and that helped us overcome the barrier of being an unknown brand,” says Varun.

It was a product that was not there — a portion-packed instant pasta where the consumer has to do only basic cooking. It was convenient, had innovative packaging, and was available in the variants that the Indian palate really likes.”

However, the launch in the mass outlets showed them that their packs were too high priced for first-time consumers to try out. That’s when the company decided to launch single-serve packs at Rs 99. That proved to be a game changer and supermarkets across the top six cities started stocking them and consumers, many of them trying to cook pasta for the first time, started buying their packs. The peak sales when they had only serves-two packs was 10,000 units a month. This galloped to 1,00,000 units a month with the launch of single-serve packs.

Chef’s Basket has since stopped some of the earlier variants and introduced a slew of new ones. The company realised the four-month shelf life for the Mexican range was too short for it to be a viable revenue generator. The Mexican range was pulled back and the brand will reintroduce a fresh range soon. Today Chef’s Basket has a range of pasta kits in single-serve and serves-two options, a pizza kit, and packs of just sauces and pasta. It also introduced an Oriental range of hakka noodle kits and sauces; a fresh range of sauces, dips, hummus and salsa; and a dessert kit.

Right at the beginning, the company had thought of a chip-and-dip brand. However, the idea of launching two brands at once was daunting. Over a year ago the company revisited the chip-and-dip idea and started R&D. Varun says it was almost like a startup within a startup, with a team working on the flavour of nachos, the accompanying dips, and the packaging. The Colonel & Co range of nachos was launched in November 2016. While Chef’s Basket is retailed through modern trade outlets, Colonel & Co is sold through 10,000 general traders or small retailers. “The Colonel & Co nachos with dips have become an instant hit. They are already ranked second or third in the market,” says Ashesh of SPAR. He says affordability and convenience of the nacho-and-dip combo packs, which are priced at Rs 50, are contributing to the brand’s success. In March, Fizzy sold over 6 lakh units of Colonel & Co. Online, the brands are sold primarily on Amazon and BigBasket, but this channel contributes less than 10 percent of business. However, Varun admits that online commerce ensures reach, with Amazon having delivered Chef’s Basket packs to the Andamans.

Under Chef’s Basket, Fizzy is launching a junior range that, according to Varun, will be as easy as cooking Maggi noodles so even kids can make it. The Chef’s Basket Junior range, which will be priced at under Rs 50, will launch in May with two flavours — tangy red and creamy white sauces.

The company has more innovations in food in mind. Varun would like to launch pita bread and hummus next under Colonel & Co, though nachos is the focus for now. As Varun says:

We are doing format innovation; we are not introducing a new food. We are saying a pack of nachos should have dip. We give a complete eating experience. So anything is possible in this format.”