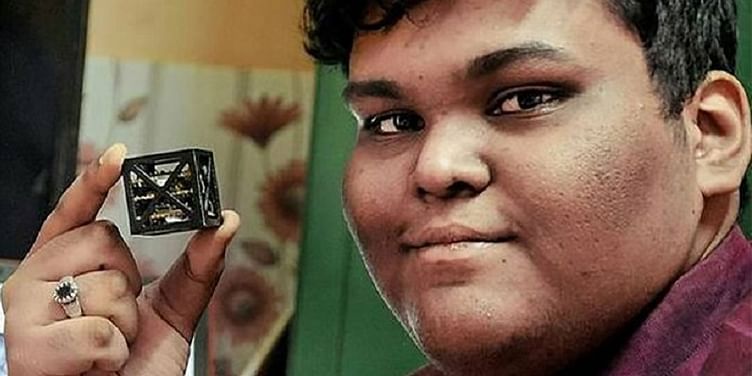 On June 21 this year, history will be made with the launch of the world's smallest ever satellite -- KalamSat. The launch will also hold special significance for India, with 18-year-old Rifath Sharook, a native of Tamil Nadu, being the brains behind the satellite. This will be the first time an Indian student's experiment will be operated by NASA.

Hailing from the Tamil Nadu town of Pallapatti, Sharook has truly achieved something special with the KalamSat. The satellite will be launched by the US-based National Aeronautics and Space Administration (NASA), and weighs only 64 grams. Named after India's former President and nuclear scientist A.P.J. Abdul Kalam, the satellite is slated to be launched from a NASA facility in Wallops Island.

Sharook's project made it through the competition 'Cubes in Space', which was a collaboration between NASA and 'I Doodle Learning'. The project is the first to be manufactured through 3D printing, and aims to redefine the performance of new technology in space, reports the Business Standard.

The mission span will be for 240 minutes, with KalamSat operating for 12 minutes in a micro-gravity environment, transported by a sub-orbital flight. Sharook, in a conversation with TOI, said,

The main role of the satellite will be to demonstrate the performance of 3D-printed carbon fibre. We designed it completely from scratch. It will have a new kind of on-board computer and eight indigenous built-in sensors to measure acceleration, rotation, and the magnetosphere of the earth. The main challenge was to design an experiment to be flown to space that would fit into a four-metre cube weighing 64 grammes.

Sharook's project was sponsored by ‘Space Kidz India’, and points to his keen interest in space. He has also subscribed to the NASA kid's club. Further speaking about the scope of the project, he said,

We did a lot of research on different cube satellites all over the world, and found that ours was the lightest. We obtained some of the components from abroad, and some are indigenous. The satellite is made mainly of reinforced carbon fibre polymer.