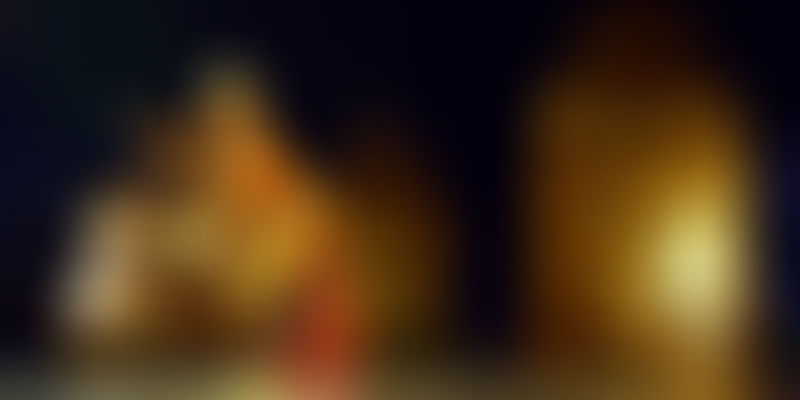 Shashwati journeyed from being a little girl who was too restless to sit in one place to a danseuse who travels the globe.

Like many present-day makeover of many royal havelis, the rajbari of Bawali in West Bengal has also been turned into a luxury resort. It was here, now rechristened The Rajbari Bawali, that I arrived in February this year for an Odissi performance by Shashwati Garai Ghosh and her troupe. As the composition spread over a majestic flight of stairs and down to the lawn, the performers wove seamlessly through the dance. Shashwati, 37, and one of the few Odissi soloists of our country, is a hard taskmaster, I heard.

Her grace, elegance and wondrous command of the form made me curious to hear her story.

'I wanted to dance with my friend'

Shashwati enrolled in an Odissi class at the age of 10 so that she could dance with her best friend in school functions. It was her nature, however, to engage fully in whatever she did. That is how dance became her constant friend and companion through the restless teen years and held her in good stead through the confusing process of growing up.

She enrolled in a pre-degree course in dance at Rabindra Bharati University, Kolkata in 1998 and went on to do her bachelor’s and master’s in Odissi.

In 1998, Shashwati happened to watch a production of Katha Surpanakha by Sharmila Biswas, a reputed Odissi dancer, and her troupe. “I was dazed throughout the performance,” she recalls. “I could not blink. I felt that that was how I wanted to live my art.” That was the beginning of something new and life-changing as she soon joined Sharmila’s Odissi Vision and Movement Centre, Kolkata in 1999.

'I danced with my soul'

Since then, there has been no looking back for her except to see how far she has come. With Sharmila, Shashwati found dance as she had always longed for it. She immersed in dance almost 12 hours every day, including a few hours at her university classes in the afternoon. For her course there, she did extensive research in the library and prepared study material for herself. She lobbied to be allowed to write her examinations in English in a university where everyone had written and lectured in Bangla over the preceding 12 years and was continuing to do so. She eventually got her way and things started falling into place.

Around the same time, in 1999, Shashwati began travelling all over the globe with her guru’s repertoire which was renowned internationally for its expertise.

“I have been lucky to get my guru,” Shashwati says. “The mentor-disciple relationship is extremely important and, unlike in other art forms, a dancer can rarely change form or guru.” A dancer, then, she feels, is intrinsically bound to her art.

Sharmila’s compositions, too, brought forth her students as much as herself. In class, she told them to learn from her, but not to emulate her. All of this impacted Shashwati, the young dancer, and created a certain indomitable individuality about her. She wanted to dance solo for she wished to design her own kind of dance. “My own place is the best place to dance for, there, I am my own audience.”

Soon after, she began to teach senior classes at her guru’s institute, and, in 2006, she started her own with a handful of youngsters who were studying dance at Rabindra Bharati University. The number of students increased and, in 2012, when she was 32 years old, she formally set up Angashuddhi: Home for Odissi in a south Kolkata location.

The art and the artiste

Shashwati has performed several times at the Konark Festival, the Mukteshwar Festival, and the Ananya Festival in India. Besides, she has danced at Menaka Thakkar’s group production (Toronto, 2004), Maximum India (Washington, 2011), and at Esplanade’s Kala Utsavam (Singapore, 2016) to name a few of her stints worldwide.

She calls herself a dancer not from Kolkata, but one who resides in Kolkata for she believes that her dance form is not and should not be limited to her immediate surroundings. Her personal style is observing art as it is perceived in every place that she has performed in and inculcating such taste in her own. In keeping with the same eclecticism, she exposes her students to different and related training. Dance, she believes, can groom a life. It is not only the dancer who must embrace it as a way of life, but the audience, too, must be told of its professionalism and seriousness. That, she thinks, is how we create a sensitive and earnest platform for art.

“I grow with my students. I cannot stagnate or be rigid,” she emphasises. “They should live all aspects of their lives fully. Dance is a part of that life that I offer. I train them in makeup, costume selection, and stage presence.” Art is completion.

She talks of the financial constraints that performing arts face and of the perpetual ‘negotiable budget’. She is rueful of the possessiveness of the artiste. "We are wary of sharing what we create," she says, "and that makes for bitter competition." To break that mould, Shashwati incorporated workshops in the Angashuddhi way of training in 2012. Her purpose is to teach her students to share art and to spread the way of learning from different forms. Classical dance, contrary to belief, is not bound to one absolute form. Shashwati believes that art seeks to evolve with the artiste, just as artiste with the art. And, that is Odissi as she lives it.