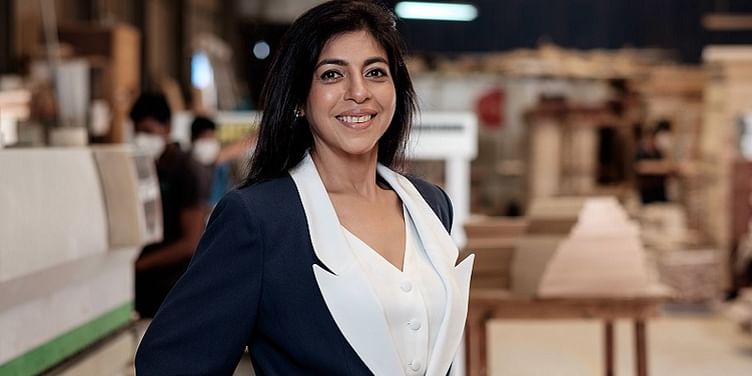 “Everything in my life has been a wild card,” says 49-year-old Anjum Jung, Founder, Morph Design, an interior design firm based out of Bengaluru, and sister of Prestige Group founders Irfan Razack, Rezwan Razack and Noaman Razack. Starting out in 1992, from the confines of her parents’ garage, Anjum today has manufacturing units in Hennur, and recently opened a 2.5 lakh sqft showroom in Malur. The 25-year-old venture employs over 300 people.

From books to the real world

A grey granite building next to Commercial Street in Bengaluru, The Falcon House, as the Prestige Group’s headquarters is called, stands as a testament to the company’s legacy. Taking a look inside the plush rooms and offices, one is bound to think that Anjum, as a sister of the Prestige Group founders, would’ve had it easy. “I have been lucky, and providence has been on my side,” admits Anjum. But the story she narrates is one filled with serendipitous moments and uncompromising hard work.

Wearing jeans and an oversized white shirt, sans makeup, Anjum exudes warmth as you watch her walk into a room filled with books and a table bearing sheaves of papers and plans. A smile and a confident handshake later, she is ready to field questions. Hailing from a conservative Muslim family, Anjum is the youngest of four siblings.

A volley of wild cards

“So, it goes without saying that I was spoilt and protected, and I received a lot of privileges that my brothers didn’t have,” says Anjum. During those days, her life revolved around her brothers, with encouragement from her father, she would travel and read. “My brothers and I are like buddies, and they have been my mentor and guide since the very beginning,” Anjum reminisces fondly.

And yet, when Anjum started up, she chose to work independently. After completing her B.Com, Anjum was at a crossroads–she knew that accounting and commerce as such didn’t appeal to her. So, when given a choice, she picked interior design. She describes getting into interior design–what she calls her first wild card–as jumping into the ocean without knowing how to swim. She says,

“I had no idea about lighting, furnishings, space, ergonomics, or anything that connected with interior design. But I was good at observing things and situations; it is my biggest asset. I would quietly be around my brothers, and with the platform that I had open to me in terms of the diverse work we’d done, I educated myself. Since books were something I always invested in, I bought the Time Saver’s Standards, a bible of sorts for students of architecture. It was my guide.”

Anjum started by manufacturing furniture from her parents’ garage. She got a team of carpenters from a friend who was shutting down his business. “I had no idea who was going to buy my furniture, but I had inherited 10 guys, and every week, I had to pay them salaries,” says Anjum.

An era of trial and error

Starting with one piece of furniture at a time, selling to friends and family, the numbers slowly started building. While Anjum had no formal training in design, she says it was her inherent talent and core strength that allowed her to adapt to the field so quickly. She would try and experiment with different pieces and understood that she had a knack for woodwork. But Anjum describes those years in her parents’ garage as one of trial and error.

Soon, the garage began to seem too small, and since it was a family home, it was only fair that Anjum moved out and found a place. Knowing that she needed a larger space, Anjum sent one of the carpenters out to Hennur Road. Her family had a farm house there, one that she would frequent.

“It was the time when I would bake; it was how I funded myself during my college days. All my shopping and expenses were taken care of by baking and selling cakes. And in order to get cheaper eggs and raw material, I would go to a poultry farm in Hennur; so I knew the area, and also knew that it would be a great place for a factory,” says Anjum.

After two days, they found a man who owned factory sheds around the area. Anjum met the landlord and signed the agreement, and there was no turning back. By then, impressed with the woodwork she would do, her brothers asked her to work on joinery, and set up such a unit. So, consolidating the sheds, Anjum was able to build a manufacturing unit over 60,000 sqft.

Joinery focuses on the woodwork inside large apartment complexes, and from apartments, Morph was soon able to venture into hospitality, work on metal, and even develop soft furnishings. Today, Anjum runs a tight ship, but when she moved into The Falcon 12 years ago, she had a sort of exodus. Explaining this, she says,

“I had asked the whole team of seven or eight people to leave. I realised that they were looking at Morph as a side business while focusing elsewhere. My idea was simple–you can’t be married and have a girlfriend–either you’re committed here or there. I only had a team of 50 people then, and losing eight of them was a big hit, but I was sure of what I wanted and expected. Even today, every drawing that gets into production has to have my signature.”

Added to this, it also wasn’t easy being a woman entrepreneur. Anjum believes that it has taken 25 years for people to take her seriously. From questions of whether she knows her stuff, to whether she will able to execute the project, Anjum has always faced down prejudice by proving that she can do better.

Now, with a strong team in place, Anjum says that she has the luxury of focusing on creating designer furniture and experimenting with different materials. She believes that it was her sheer determination, strong will, and hard work that kept her going.

“I never believed that I knew everything or that I was the smartest person in the room. I learn from my team every single day. The minute you think you know everything, there is no room for learning. I think every woman today should be independent. And this isn’t just for financial reasons, it gives you self-confidence and drive. And unlike 25 years ago, starting today is much easier,” says Anjum, signing off with a confident smile.