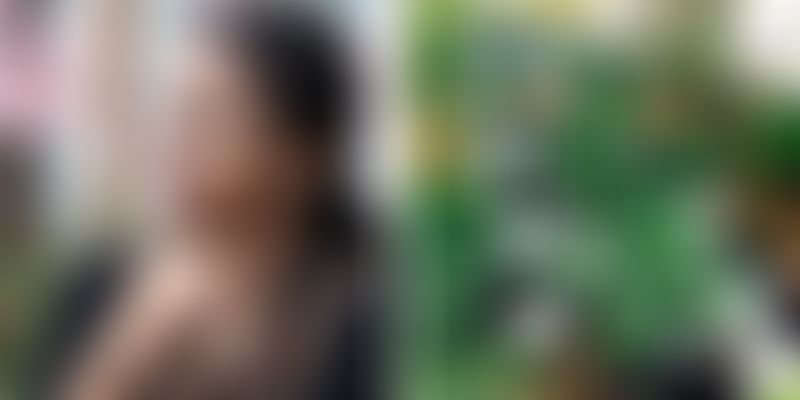 Jeevna decided one day to grow a few bags of greens on her rooftop. Now, she conducts workshops for children on organic gardening.

Many Indian women opt to stay home either out of choice or compulsion. Many of them, unsure of how to use their free time, turn to various innovative and creative ways to spend their time and make a living in the process.

While many become entrepreneurs through food or textile businesses, cooking, teaching art, music or vocational skills, Jeevna Muralidharan, a 46-year-old from Tiruppur, Tamil Nadu, chose an unconventional path. She decided to put her barren rooftop to use and sprout a few plants on the empty space, which would later be converted into a lively urban rooftop garden.

It all began when I quit my job of more than two decades due to changing priorities and became a homemaker. Clueless of what's in store for me in the near future, I decided to grow a few bags of greens on my rooftop, says Jeevna.

Jeevna started to work on her terrace in December, 2015. She started off with some leafy vegetables that she found easy to grow and slowly extended to producing vegetables such as radish, chillies, tomatoes, aubergines, beans and gourds.

Going organic right from the beginning, Jeevna initially grew her produce on coco peat, and later moved onto soil for her more complex produce.

She makes her own compost with kitchen waste and procures organic vermicompost from a cattle farm. Jeevna, who believes in making the most of the things around her, has created the space around her rooftop from used materials. She has used recyclable materials like a swimming pool tub to mix the potting mixture, paint cans to hold trees, and even converted a treadmill box into a big veggie platform used for mint, coriander, yam, greens and potato.

Having an organic garden means one has to welcome nature and let things take course for the plants to grow naturally. Naturally so, Jeevna’s garden isn’t just home to some great flora, but some interesting fauna too.

“My garden always welcomes sparrows, squirrels and a few birds and predatory insects helping in pollination of my veggie plants along with my collection of floral plants like roses, hibiscus, Passion flower, Jasmine flowers, adeniums etc. A few tubs of lilies with molee fish add life to my rooftop garden,” says Jeevna.

Over the years, Jeevna has been growing a few varieties of exotic vegetables and fruits, which are not indigenous to the country. She has expanded to growing a few exotic varieties of watermelons, squash mandarins, cucumber, grape vines and cherry tomatoes by giving her green thumb a free run on her rooftop.

The rooftop also has a few trees like custard apple, lemon, banana, gooseberry, moringa and papaya. Along with some rare finds like aubergines - white round, red lady's finger, passionfruit, green and red amaranthus.

Jeeva likes to spread the joy of organic farming with people around her. She likes to share with people around her knowledge on kitchen gardening, growing organic produce at home and also shares the yield from her rooftop. “I like to engage with our community. I sell excess produce to my neighbours and share seeds with a seed bank,” says Jeevna.

Recently, Jeevna launched a ‘Go Green’ project in her neighbourhood by planting trees and saying no to plastic bags. Jeevna’s goal is to create awareness among children as she feels they are the future of this world. She also conducts workshops for school children where they are taught the basics of maintain a kitchen garden.

“I took the first step recently by conducting a workshop on organic gardening for 30 students. My dream is to make Tiruppur, and the country better place to live with residents growing their own organic food.

My cousin Deepak Jagdish, seeing my garden and hard work that I put in every day, encouraged me to create a Facebook page Jeeva's Urban Organic Garden where I share my everyday garden stories and learnings,” she says.