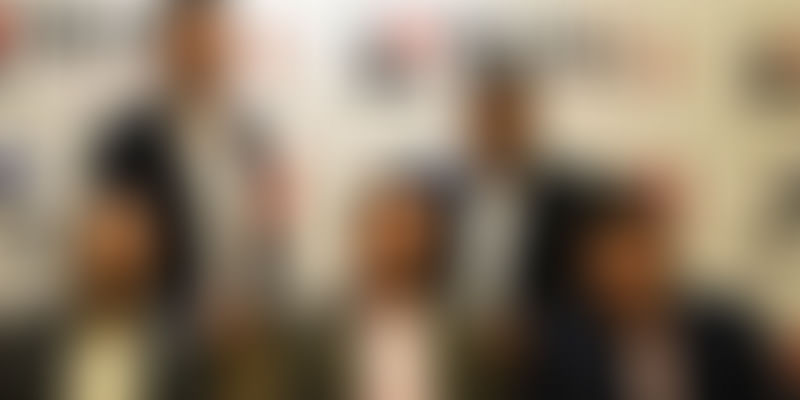 People with an entrepreneurial mindset never shy away from toying with new ideas. And Vijay Ketan Mitra is one such person who always nurtured the dream of starting his own venture.

In fact, Vijay had been doing one thing or another since college days–be it giving tuitions for competitive exams or launching gourmet tiffin services for schoolchildren. The fire kept burning even when he went on to work for companies for a decade and a half; he attributes his stint in the corporate sector with giving him the confidence and encouragement to launch and run a successful business.

Since Vijay delivered large-scale change development projects across organisations, skill development and training as a sector quite fascinated him. He believed in getting the best out of people by bringing observable and lasting changes in their behaviours and attitudes.

Vijay brought the same mantra to PositiveShift, which he started in Hyderabad in 2013 as a training and people development company but is now a skill development platform that offers learning solution.

“At PositiveShift, we exist to bring dramatic, observable, permanent change in one’s thoughts and behaviours,” says 41-year-old Vijay. An engineering graduate in computer science from Jadavpur University and an MBA in change and consultancy from Middlesex University in the UK, Vijay has worked with HSBC, Commerzbank, Merrill Lynch, and Tata Consultancy.

Vijay says his team's biggest break was when they got an offer from IIIT to train 6,000 students across three campuses in (erstwhile united) Andhra Pradesh. According to the company, it clocked a turnover of Rs 16 lakh in its first year, and doubled it to Rs 34 lakh in the next.

How did Vijay get his co-founder?

When Vijay launched his first programme on teacher development in 2013, he was looking for someone who was well-versed with schools located in Hyderabad. At the time, he was also a leadership excellence coach as part of a community development programme with Dr Reddy’s Foundation. It was there that he was introduced to Venkat Ramana Gudipati. He shared the plan of PositiveShift with Venkat, who agreed to handle sales and business development for the programme. Later, he became a part of the venture.

An entity with four companies

PCCL primarily works with the Central government in the Skill India initiatives like Pradhan Mantri Kaushal Vikas Yojna (PMKVY), NSDC, and ESDM. The youth are trained in skills relevant to retail, telecom, electronics, and healthcare sectors. The company claims to have trained more than 15,000 youth at more than 50 training centres across nine states. It also takes up special consulting projects like helping companies to setup business operations in India and more.

Under PSTL, they have launched the commercial brand WIISE (World Institute of Innovation, Skills and Entrepreneurship). It is an online and digital TV learning platform for learners in the Indian subcontinent and South-east Asia.

The WIISE network promotes self-paced and scheduled courses in the areas of digital marketing, data science, and entrepreneurship. The company has partnered with institutes like IIM Lucknow, NIESBID (National Institute for Entrepreneurship and Small Business Development), and Goa Institute of Management.

While PPCL is aimed at offering HR outsourcing, payroll services, staffing services to various clients in telecom, electronics, and manufacturing sectors, PSUK is geared to offer learning and skill training services in the European and African markets.

PositiveShift mobilises youth, delivers training and ensures that they qualify for Central government's accredited certification and get placed as well. It provides learning programmes in areas such as data science, business analytics, digital marketing, entrepreneurship, and project management.

“We have a network of more than 100 consultant trainers at various expertise levels in our trainer pool. We also certify our trainers from professional bodies.”

According to Vijay, PositiveShift makes Rs 10,000 per candidate, once the candidate obtains the certification. For WIISE, the revenue model is based on fee per course and subscription to self-paced courses. The company currently has a 47-member team.

According to a FICCI-KPMG report, India occupies an important place in the global skilling ecosystem. The report states that the total projected increase in labour during the 12th plan period was estimated to be 477.9 million in 2011 (for the 15 and above age group) and is estimated to increase to 502.4 million by 2017-end.

The report also states that a lot of educated job seekers are unable to find employment or are settling for ones below their capability and expectation. Realising the need for up-skilling and re-skilling, the government through different agencies is focusing on skill development and aims to train about 500 million people by 2022.

Vijay says that as of now they have aggressive plans for WIISE in the next two to three years. At WIISE, they aim to achieve a turnover of Rs 3 crore by December 2017.