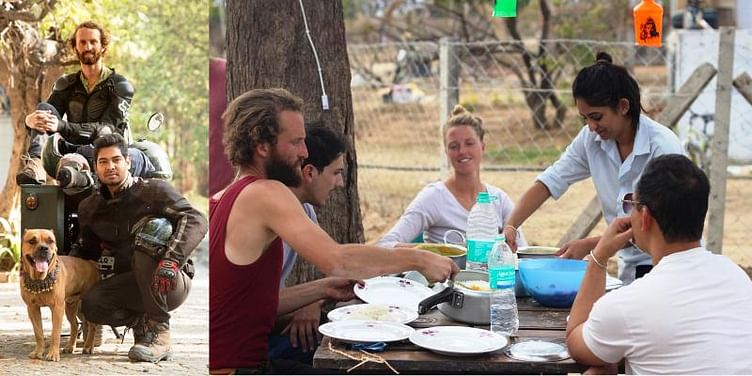 Vasudhaiva Kutumbakam is the 18-month-long, project-driven biking project Ben and Prashant embarked on in December 2016. The journey will cover over 20,000 km and 22 countries.

With Vasudhaiva Ride, Ben Reid-Howells and Prashant Kumar aim to look at the positive narrative of the world, and will be collaborating with artists, individuals, and organisations to show what people, especially communities, are capable of doing once they come together. The meaning of the term Vasudhaiva Kutumbakam—the world is one family—is the essence of their motivation and goals.

Ben, 26 met Prashant, 27 in Pune. Their meeting made them realise the commonalities in their interests and so they set out to plan the ride. Ben studied sustainability in college and came to Pune in 2015 as a volunteer who worked for United World College (UWC).

Prashant came to Pune from Bihar to study engineering. “I was never a college- going person and was more interested in workshops where I could learn how to play with machinery.” Prashant dropped out of college in the seventh semester, a decision he has never regretted. During college he started Rebirth, an upcycling company, with his friend Nivedita Joshee Chopra.

Prashant, who has been into biking since childhood, recalls how he was in grade six when his cousin brother taught him how to ride. Impressively, he is a self-taught car driver as well. During college, he went on a lot of solo trips in rural India on his bike, participated in the Supra Formula SAE and Baja India, and also volunteered with an animal shelter in Pune.

Preparation for the journey

The ideation, planning, and logistics took over a year. They worked out of Prashant’s house in Pune where they started with chalking out a route from Pune to Scotland.

The community and their friends have been huge supporters of their ideas and have helped them with critical thinking. “More than reason, the emotion around us was a reminder that what we are doing is big,” Ben adds.

They used their existing skills to gather as much money as they could. Both of them are musicians and while in Pune they performed at various venues to raise money. Additionally, Prashant continued to produce art installations for various pubs and bars across Pune using his upcycling skills.

They have estimated the next 18-24 months to cost them around Rs 70-80 lakh. Even though they are yet to reach this goal, Prashant believes money is not the be all and end all.

Main aims of the ride

To explore, engage, and connect are the three main aims of journey—exploring the world by travelling to different places, engaging with different cultures, and connecting the local with global by sharing what they do. “The worry and negativity in the world makes us want to explore the positive narrative of the world and contribute our skills to community building wherever we can,” says Ben.

The project revolves around taking help from the community, moving around with a message, and planning sustainable projects. Since they will be at a particular place for a short duration, they will need the help of the community to keep it running. For the community centre they built in Pushkar, they have already found a body that will ensure it is used to its maximum potential.

Ben and Prashant’s first biking journey took them from Pune to Pushkar, where they built a community centre from scratch in 24 days with a budget of Rs 1 lakh. They collaborated with Nivedita who had envisioned building such a centre in her native Rajasthan. Their belief in the community was strengthened at this point since they saw the support of local people and travellers from different nationalities helping them build the centre.

Since Pushkar is a desert area, they used a drop irrigation system to water the plants, something Prashant learnt from farmers in Maharashtra. This centre is built out of locally sourced and natural materials, and any waste generated from the construction was used to decorate the interiors. The community centre wishes to bridge the gap between urban and rural India, where ideas and thoughts will be freely shared.

“A lot of bullshit (cow dung) was used in building this centre,” Prashant chuckles.

They are hoping to build a skill development centre in Bihar in the next two months. They will be collaborating with schools and wish to connect with local people in order to understand the existing infrastructure and see what can be done to improve upon it. Additionally, during their visit to Nepal later this year, the two will be collaborating with the Maya Universe Academy, a school started by graduates of UWC.

The two will be covering about 60-70 km per day and will stay in different places for a week to a month depending on their collaborations. They expect to reach Scotland by early-mid 2018.