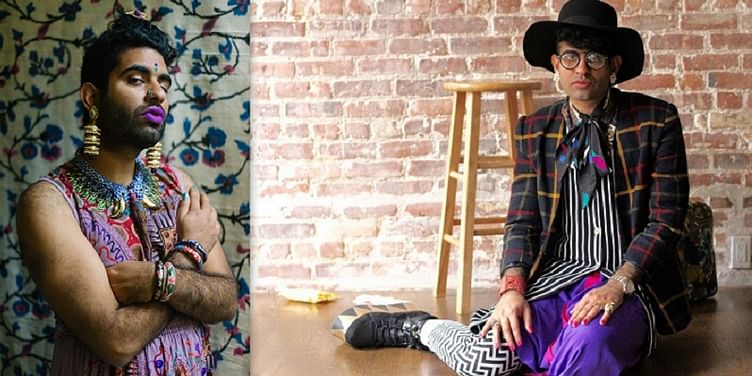 On the cusp of World Pride Month, we bring to you the tale of a celebrated queer artist.

“Every day I have to ask myself, ‘Am I ready to get harassed today?’ When I’m walking down the street, everyone knows I’m queer. I visibly defy what it means to be a man or a woman. I’ve had so many people tell me, ‘Maybe if you just took hormones or tried to look more like a woman, you wouldn’t experience so much violence’. But I shouldn’t have to change what I look like to be safe. I could try to disappear, to dress like a boy or a girl but this is about creating a world where when people are different, we say, ‘That’s awesome. Thank you for showing me a different way of living,’” begins Alok Vaid-Menon.

As the poetry enthusiasts at Bengaluru’s Humming Tree take turns to meet Alok, the artist, dressed in a floral blue gown with matching lipstick, educates the audience on the use of gender-neutral pronouns "they" and "them” to refer to the community.

Texas-based Alok is also an educator and gender-nonconforming writer. Having risen to stardom with DarkMatter, a collaboration with Janani Balasubramanian that led to spoken word performances on queer/trans-South Asian themes, the celebrated queer artist walks us through the journey.

Raised in a conservative Texas town, the refusal to conform to society’s notions of gender led to ostracism, but Alok’s family was a ray of hope. Alok says,

Bless their hearts, my parents were trying their best and were accepting as they could be, but I just feel like they didn't really know about trans and gender-diverse people and how best to support me. It didn't help that I grew up in a small conservative town so even before I was struggling with gender, I struggled with routine racism. Fortunately, my sister always had my back.

For any trans and gender-diverse individual, coming out is the biggest leap of faith. Alok says,

I don't really know if I had the choice to come out. From as early as I can remember, people were calling me a ‘girl’ and ‘too feminine’. So I never got the chance to negotiate my identity on my own terms—it was always in response to other people harassing me. For my safety, I had to pretend I was cisgender and straight. But when I was 17 I started to disclose to close friends and family that I was different, although I didn't really have the right words for it at the time.

With the physical body undergoing its own ripples of change, puberty had some tricks up its sleeve.

As a young kid there was more of a space for me to be gender-nonconforming because people thought it was innocent and cute. But when I hit puberty people began telling me I should ‘butch it up’ and become a ‘real man’, and I wished I could be treated as before. At a basic level, we experience the trauma of erasure—of not even being able to feel that we are real.

Voicing it through poetry

Since being introduced to the art form at the age of 12, Alok has come a long way, and the massive social media following is proof.

I didn't choose poetry, poetry chose me. Because I had no one to talk to about my identity, I started to write and eventually share it online. People called it poetry and I was like ‘Alright, sure, but this is just me!'

Toggling between poetry, comedy, and dance, Alok’s performances are fluid and experimental, touching upon a personal journey as well as societal absurdities.

I love audiences that are ready to be vulnerable and feel in public. My performances, like my gender, resist definition.

When asked about the early memory of penning down a poem, Alok says,

The first poem I remember writing, when I was 12 or 13, was ‘For the Foe Forgotten’ and it was a really deep poem about how hurt people hurt people. I was basically trying to show how every bully had been bullied and trying to imagine how we could break out of the cycle of violence. I wrote it for a school assignment and I remember it came so naturally to me.

Speaking of all the colours, frills and prints, Alok says, “I suppose that when you break out of society's norms around gender, breaking all of the other norms just comes more easily! I'm not interested in being contained or categorised and my style is about celebrating myself in all of my complexity.”

With pride walks, cross-dressing, and drag performances gaining ground, the world is slowly realising that the LGBT and trans community must be given social space. When asked about what took the evolution so long, Alok explains,

I say, ‘It took you long enough!’ The truth is that LGBTQ people have been in India for thousands of years. We have just been forcibly erased from people’s memories and histories. There is little about us that is ‘new’—what is new is society's deeply entrenched homophobia and transphobia. I see trans people really coming into our own power. We have been neglected by gay movements and by women's movements, so we are having to do it for ourselves. While it can feel so emotionally validating to be yourself, the reality is that you have to face constant harassment and violence because of it.

But Alok wouldn't give it up for anything. “I am a performance artist; I live out of my suitcase. With every stint, I am surviving and (hopefully) making art about it,” Alok signs off.