A tale of three games from three cities - Nazara, 99Games, and Octro 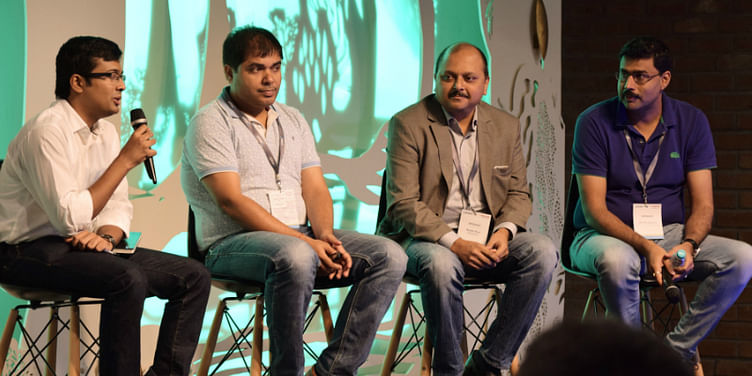 Three homespun gaming companies tell us what works and what doesn't as users increase and more opportunities to make money open up in an India, post-Jio and post-demonetisation.

It is probably the “best of times” now for the mobile gaming revolution in India with the rapid adoption of smartphones and more cost-effective mobile Internet packs thanks, in part, to the arrival of Reliance Jio. Though the demonetisation has encouraged and also forced a large percentage of the Indian population to adopt digital transaction modes, it is still probably the “worst of times” for the stakeholders in the Indian mobile gaming industry as they are finding it hard to monetise from users directly. This has led to companies seeking alternative revenue models and innovations.

During a recent panel discussion at KStart’s office, at an event titled, ‘Let the Games Begin’, Rohith Bhat, CEO of 99Games, Manish Agarwal, CEO, Nazara Games, Vaibhav Gupta, VP, Octro, spoke at length about how to build successful mobile gaming startups out of India, the challenges plaguing the industry and how they have evolved and adapted to overcome them. The session was moderated by Navin Madhavan, Head of BD & Strategic Partnerships, Inmobi. Here is an overview.

All three companies have built successful games out of India but leveraged different strategies from their turfs in Udupi, Mumbai and Delhi-

With the headquarters in Udupi, Karnataka, 99Games is a leading Indian developer and publisher of games for global and Indian consumers. The venture has published over 16 game titles since launch in 2009 and estimates to have clocked in 26 million downloads globally till date.

Star Chef is 99Games most successfully monetised game, while ‘Dhoom:3 The Game' is their most downloaded game. 99Games claims to have generated close to $20 million in lifetime revenue so far with its unique growth strategy of addressing the global and Indian market.

With its headquarters in Mumbai, Nazara is a leading mobile games publisher focussed on the large mobile consumer base in India and other emerging markets. In addition to publishing a range of branded and original mobile games, Nazara also runs gaming subscription service across 60 countries covering emerging markets like Africa, the Middle East, Southeast Asia and the Indian subcontinent.

Nazara also owns exclusive mobile gaming rights to popular IPs like Virat Kohli, Rohit Sharma, Hrithik Roshan, Chhota Bheem, Motu Patlu, and claims to have been the fastest growing publisher in 2016 by downloads in India. Nazara works on the pure-play publisher model, where it partners with developers who wish to expand in India. Their recent game, Stick Cricket Virat and Rohit, is an example of this. For the game, Nazara partnered with Stick Sports to leverage their mutual strengths, IP and brand respectively to capture the Indian market.

With its engineering muscle located in Delhi, Octro was founded in 2006 with a mission to create productivity apps for mobile devices. After launching one of the first mobile Voice-Over-IP infrastructures called OctroTalk, the company ventured into building mobile gaming platforms. Octro is now known more for its casino games, like Teen Patti, Indian Rummy and Tambola, which have seen great success in India.

The rise of rewarded video?

While giving an overview of the Indian gaming industry, Navin provided an ad network's perspective. He noted that InMobi’s data showed that apart from the default social apps on one’s phone, gaming apps were actually the second most popular category of apps in India, though they are hard to monetise directly.

This has led to the rise of ‘rewarded video’, where gaming apps encourage users to view short ads within their app and then reward users through virtual currency or in-game upgrades. Navin noted that rewarded videos have become very popular and are effective too with high completion rates, which lead to good brand building and even downloads for the advertiser.

Putting himself in a game developer’s shoes, Navin said that some of their popular dilemmas include-

Talking about the philosophy behind 99Games, Rohith said that respecting players is key to building and monetising games over a long period of time. StarChef, which is 99Game’s most successful title in terms of revenue, has been around for three years, with potential to be monetised for three more years at least.

From an engineering perspective Rohith added that as 99Games was scaling up, they saw 38 billion database transactions per day at one point. They also saw 2.2 billion minutes of gameplay in 2016.

But talking about average gaming session times, Rohith made an interesting comparison,

People watched Masterchef for 40 minutes per session. Users spend 35 minutes on average on StarChef, per day.

On the best practices that game developers should follow, Rohith noted that one should measure return on investment (ROI) on a daily basis and also try to increase their lifetime value (LTV), while looking to decrease the cost of user acquisition.

'Monetising the Indian casual gamer' is an oxymoron?

Manish Agarwal, CEO of Nazara, has spent many years in the gaming industry across different roles. So, considering the difficulty in monetising users directly, he joked,

The phrase 'monetising Indian casual gamer' is an oxymoron.

He noted that Indian casual gamers aren’t as evolved as their counterparts in the West or China. Most casual gamers in emerging markets look for instant gratification and then uninstall the app. Manish noted that the uninstall rate for games in India can be as high as 90 percent, because of limited space in devices primarily and not necessarily because of quality of the game.

Manish realised that he had to do lot of unlearning and experiment to find the winning strategy. His initial strategy was to not show ads to users for their first six days and then once they were hooked, he would turn the ad engines on. But there was one problem:

The reality was that there were no real users to show ads to after six days. So casual games need a balanced strategy.

Another strategy is to ensure the game design is catered to the target audience. Manish noted that one of their kid-friendly games was making $3,000 per day at its peak. The idea had come from observing his own kid watching TV. He said,

Kids generally love to watch ads. But some of them didn’t know how to hit ‘play’ and watch it. So we introduced ‘forced rewards’ for rewarded videos. Basically the video played on its own.

Manish faced some kickback from his game designers, But when they A/B tested it, they found that it actually worked well and decided to implement it on scale. The gaming market in India is still under under-penetrated and it is possible to earn revenue even from casual games, with the right strategy.

We are not an e-commerce company that has to give users different options to buy something and then cross-sell. The key to monetisation will sound obvious, but the key is to find what the user needs and the holy grail is to design the game in such a way as to create this need.

One of Octro’s trivia games made users bet on the genre they wanted questions from. But the Octro team realised that this strategy wasn’t working and went back to the drawing board. From the data, they realised that people just wanted to play the game and weren’t interested in bidding. So they tweaked the game to include an energy level component, that drained and refilled slowly with each game.

Octro now saw that hardcore users who were hooked and wanted to play more games didn’t mind watching rewarded videos to keep playing it. They then went on to add more ‘power up’ features like 50-50 (which eliminated two options), an audience poll (common answer given by users in the past) to make the gameplay more fun.

While Teenpatti was monetising users well, Octro realised that gamers wanted to play with people they knew rather than strangers. Vaibhav noted,

We took inspiration from WhatsApp groups and included an admin-like feature. The admin was generally the leader who brought everyone together and had the power to create a mini-casino.

In this way a private Teen Patti group could have over 100 members and those buddies who were active and free could join in and play together at a moment’s notice. Vaibhav noted that this significantly drove both revenue and average session times.

Talking about the gaming industry, Vaibhav also made an interesting comparison. He said,

Indian mobile gaming is now where Bollywood was 10 years ago. People were indulging in piracy and not willing to pay because the quality of content wasn’t very good. But now the industry has evolved and people are willing to pay even upto Rs 800 for a good movie experience. Once Indian gaming studios are able to hit the nail on its head and create similar interest and demand, we will be able to earn revenues directly.