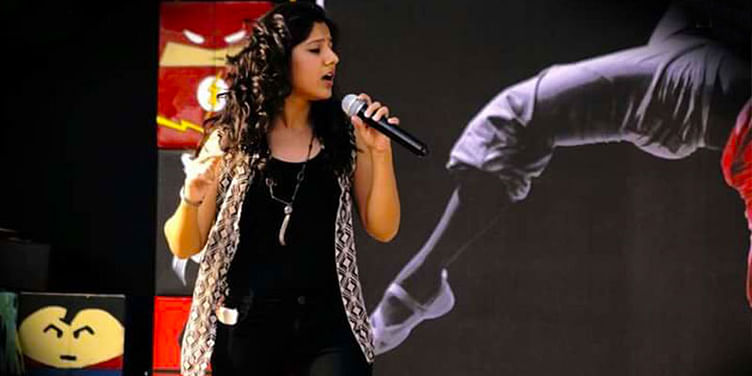 “I like it when you tease me, when you please me when you make a point

But don’t decide our relationship by flipping a coin.”

Delivered in hissing staccato, these lines could well be by Lauryn Hill, Missy Elliot or Li’l Kim. But when the number comes from a girl from Jat country, and concludes with the promise that “I’d go to people who adore me”, you have to sit up and take notice.

The rapper is Agsy, all of 19, coming from, of all places, Haryana, known for its rabid patriarchy and abysmal sex ratio. Born Agrita Dhawan, she has laughed off the collective disapproval of random uncles and aunties to become what she wanted to be – a femcee (female rap artist). Today this commerce student from Delhi University is in top gear in a male-dominated space notorious for its misogyny. Indeed, it was a space where women are rarely seen, much less welcomed. A female rapper, a teenager, and from a state like Haryana? Now that’s a triple whammy!

Agsy’s talent emerged early and she was singing by the age of 10, having been exposed, albeit briefly, to both Indian classical and Western music training. Singing is something she has always loved. But it was at a competition during her first year of college that she decided to have a shot at the edgy world of rap. “I used to listen to Nicki Minaj and Iggy Azalea and would wonder, ‘How do they speak so fast?’. I then tried learning some lyrics and performed them at an event in my college. The response was phenomenal: maybe because it was something totally out of the box. I saw a crazy vibe in people when I performed, which I hadn’t seen when I used to sing.”

And, much to the consternation of the community, a rapper was born. Her parents and brother were supportive but her radical switch sent tongues wagging when it came to fellow male students, ‘well-meaning’ neighbours and extended family. Criticism and condemnation came fast and furious but the teen was unfazed. She knows exactly where such sanctimony comes from and it only spurred her on. “Log kya kahenge is the last thing on my mind!” In fact, she finds it infuriating when people succumb to the taunts of others and change themselves or give up on their dreams. It makes her want to do things her way all the more.

[My dream, my rules, my life. Check out why path. #WeAreAllFabulous]

Agsy raps spontaneously a lot, and her songs are reflective of her persona. It’s her way of sharing what’s on her mind and what’s going on in her life and getting her sound and words out there. She loves that she can connect to people through her words and music. She performs at colleges and fests, and is getting her unique sound and vision out there. And leading the way for more young women to traverse the path to becoming femcees, in a country where people just don’t see rap as a career path for a gal.

It’s been a breathless journey from Agrita to Agsy. The Wasted Love video, her first effort to create a music video to go with her sound and showcase her talent, traces the femcee’s evolution from a Haryanvi kudi to a sassy girl who has no use for users. Agsy is much bolder, and stronger, than the teenaged Agrita. She has a purpose and a path to pave. She says being true to oneself is paramount. “Who else do we really have? What we convey to others depends upon our understanding of ourselves and if you’re not true to yourself, you just might be attracting all the wrong and unnecessary elements.”

Agsy is carving out a space all her own, and she’s proud of both her individuality, as well as her status as a groundbreaking femcee. “Being stubborn and a rebel, you do what your mind allows you to and not what people instruct, or expect you to do. There are still many people who would want me to study or do the things regular kids do but something tells me that I’m meant for the extraordinary.” It is this confidence that has brought this young woman from Haryana to stages across the country’s capital.

Right now, life is fabulous. “Fabulous isn’t perfect. It means I want to do more. Improve on this,” she says, a clear pointer to what drives this unlikeliest of rappers.

Like Agsy, when women believe path. #WeAreAllFabulous, and embrace their own individuality, there’s no stopping them from achieving what they want.