Don’t want your resume to be a 'farrago of distortions'? Shashi Tharoor’s ex-assistant will clean it up professionally 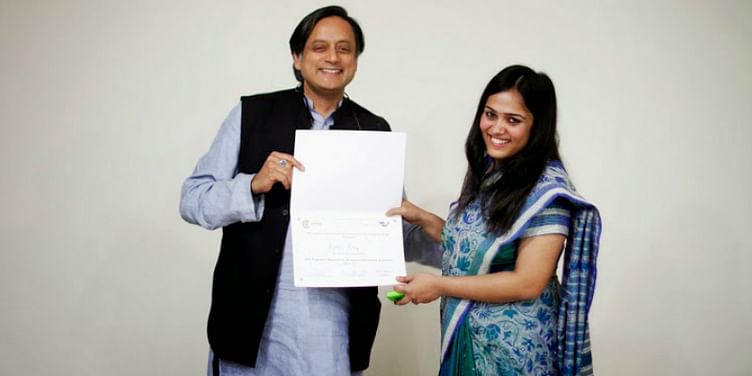 From bonding with Shashi Tharoor over cricket and politics as his “LAMP” to offering her expert linguistic skills to the world to make sure they get their dream jobs, Reeti Roy does it all with finesse and ease.

Is your current resume “an exasperating farrago of distortions, misrepresentations and outright lies?”

Luckily for the world, Congress MP Shashi Tharoor’s former legislative assistant Reeti Roy’s pursuit of excellence entails infusing excellence into your communication, so that something as seemingly inconsequential as a presentation doesn’t come in between you and your goals.

Amidst a slew of companies that offer up these services, Aglet Ink stands apart because Reeti strives to be the one pulling the strings on your projects herself.

Raised to be fierce

The Calcutta born-and-bred language aficionado comes from a pedigree of feminist-liberals. She studied Literature at Jadavpur University’s Department of English and followed it up with a degree in Social Anthropology from the London School of Economics and Political Science.

Starting her career as a research associate with Prof. Anya Schriffrin of Columbia University, who needed an anthropologist who was fluent in Bengali and who could look up historical archives and write succinctly, she was chosen as a LAMP (legislative assistant to a Member of Parliament) fellow following her stint with Anya. It was as part of this programme, in 2012-13, that she worked with Shashi Tharoor.

Calming her racing nerves at the first occasion that they met by assuring herself that she was qualified enough to belong there, Reeti soon discovered a fundamental synergy in their beliefs—that the only way forward for India was if its people are secular and liberal. “Dr Tharoor made time for everyone, even school students who landed at his doorstep without prior notice to interview him for a project, or even entrepreneurs he connected with on Twitter seeking advice.”

On her first ever assignment, she made a major mistake, due to a lack of understanding of how the parliamentary system works. “Dr Tharoor came back from Parliament, sat down with me and explained where exactly I had gone wrong. He was firm with me, but extremely polite. That was true of my entire year of working with him,” she says.

Over the course of the year, she helped him with many assignments, including one where they drafted a response to someone who wrote to him saying, “Feminists will ruin the country!” “I distinctly remember the response: 'The only thing feminists are attempting to do is to bring about equality in this country.' It was heartening to see a male politician not taking potshots at a woman for a change,” she recalls fondly.

She learnt many things from Tharoor during her tenure—how everything one writes must be backed by solid research, and how to remain cheerful and smiling even after a very tiring day. When she graduated from the fellowship, Shashi Tharoor, with his characteristic wit, put up a picture of him with her saying, “Thanks Reeti, for all your help to enlighten me as my LAMP!”

Following the fellowship, she served at the Pratham Education Foundation, the Harvard Business School’s India Research Centre, as a research associate, and eventually undertook some projects with Columbia University’s Global Centre and the UNICEF.

But the keen linguist—not to mention hustler—in her also drove her to land editing gigs with prominent houses like Rupa Publications and Harlequin Press. And even as she was working on these projects, the entrepreneurial bug had already bitten her.

READ ALSO: Meet Draupadi Murmu, the tribal woman who could be India’s next President

During her stint at Harvard's India Centre, she would connect with many professionals who were probably highly qualified, but were unable to present themselves well on paper and express themselves through their cover letter. “As the resume and cover letter is usually the first point of contact, it could be a ‘make or break’ situation for the thousands of prospective job hunters,” Reeti notes.

Because of her close involvement with various cases and companies during her stint at Harvard, she understood exactly what struck a chord with the various consumers—employers, audiences and readers—of one's professional content.

And owing to her natural flair for the English language and communication, she first started offering up a personalised end-to-end service, where she worked with the client on understanding their needs, and the country that the client wants to apply to.

An aglet for her passion

Soon, she incorporated a professional practice under the name ‘Aglet Ink’—'aglet' being a small metal or plastic sheath typically used on each end of a shoelace, and ‘ink’ being a play on the word 'incorporated'.

She came to work with clients based out of the UK, Germany, Canada, China and even Italy, and her CV and cover letter clients have included employees of Deloitte, Accenture, PwC, HSBC, Boston Consulting Group, Welspun Group, Discovery Channel India, Maersk Line and IIM Calcutta. One of her clients got a four-fold salary jump in their new job after their CV was redesigned by Aglet Ink.

Reeti had kept her day job at Harvard all this while, but in 2014, she quit her job and wanted to take some time off. During that period, understanding that she was onto something with Aglet Ink, and also given the fact that she now had the bandwidth to take on more, she saw the gap in effective communication extended to many other arenas.

“When thinking of starting a business, I think one should always think of a service that you need yourself. You will organically find clients like that,” she says, of the time she decided to finally take the plunge and go full time with Aglet Ink.

She immediately started offering up a whole bouquet of services, such as strategising interviews, conducting workshops on presenting oneself well, helping create a brand story for individuals as well as businesses, as well as handling social media for clients, ranging from sustainable fashion brands to those in the F&B and shipping industries.

Off the beaten track

She even started taking up projects that are as specific as crafting one's social media profiles on LinkedIn, Facebook and Twitter, responding to proposals, writing white papers, or scripting and editing speeches.

Primarily using LinkedIn and Facebook to talk about her work, the word got out organically that Reeti was a professional consultant. Media coverage of Aglet Ink in 2016 established her arrival as a true expert. There was a sharp spike in sales, and currently, she averages seven to eight clients a month.

Reeti, however, notes that her focus is still not on scale. Stressing on personalised services, she takes on assignments that she can work on herself, as far as possible.

“I started off as a one-woman army. Now I collaborate with other designers, policy specialists and communication experts as well,” she states, adding, “I am a very proud feminist and believe that the world is still skewed towards men. These days if I don’t get paid what I think I am worth, I walk away from the project.”

This year, she plans to roll out workshops in Delhi and Bengaluru as well, and wants to work with corporates, individuals, non-profits, governments and SMEs.