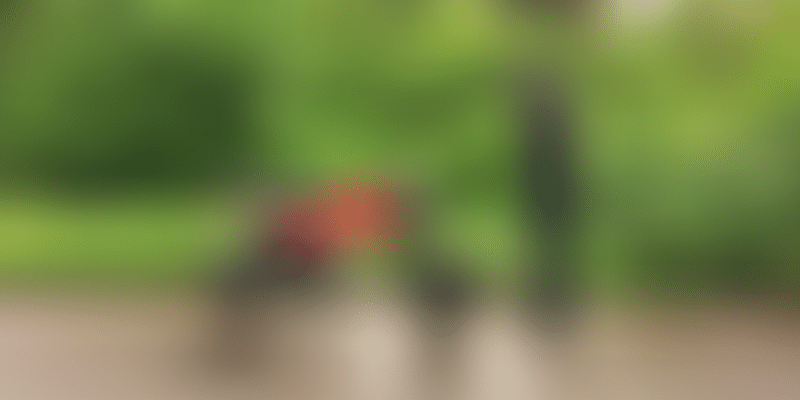 Arunabh Mazumdar embarks on a unique, solo quad-nation tour on a 100cc scooter to raise funds and create awareness about the ongoing farmers’ crises in India.

A scooter is meant to drop your kids to school, commute to work, or maybe pick up groceries. However, 30-year-old Arunabh Majumdar, a data scientist, believes that this “humble, handy scooter” is capable of not just a solo quad-nation tour— India, Nepal, Bhutan, and Bangladesh— but also has the potential to raise funds and awareness about the terrible conditions of farmers reeling under droughts across the Indian subcontinent.

People are not apathetic to the farmers’ plight; rather, they are ignorant about it. The 2015 Chennai floods brought the entire nation together as a team to help Tamil Nadu fight and rise above nature’s fury. The widespread awareness and media coverage provided a window for citizens to offer help and support— be it food, blankets, or even power chargers. Arunabh believes that people will always help, provided they know that there is a problem to begin with.

We live in a generation where it has become imperative to discuss if peacocks are celibates rather than discuss farmers dying. Farmer suicides in this country are a norm now. Sad, maybe, true, most definitely.

The year 2017 has witnessed a spiral of farmers’ crises across the country. Earlier, in March–April, 100-odd farmers protested in New Delhi to highlight the drought-ridden existence of Tamil Nadu farmers. Karnataka followed suit, as water crises and crop failure in the state pushed more than 1,000 farmers to commit suicide. Further, in June, both Maharashtra and Madhya Pradesh faced violent protests from the agrarian community.

The scale of farmers’ distress is massive, yet, Arunabh says that citizens, especially those living in urban areas, have failed to acknowledge it.

“We scroll through our social media feed and put a sad emoji when we see news about farmer suicides. And we move on to discuss why Saif Ali Khan named his boy Taimur, which is also cool. The nonchalance stems from the ignorance. Perhaps, the Tamil Nadu farmers’ suicides aren’t clickbait-worthy,” he adds.

People are always on the lookout for something crazy. Hence, Arunabh decided to set out on a ride to raise awareness about the farmers’ woes. Where is the crazy part, one may ask? In reply, he says that his tour will be taking place on a scooter rather than a bike, which is too “mainstream”.

People want clickbait and crazy. We will give them what they asked for. A ride across four nations, 19 Himalayan passes, one of the toughest off-road terrains in the world, the Annapurna Circuit in the deadly monsoons. The ride is on a 100cc scooter.

Not another ordinary bike journey

Arunabh is not new to long-distance scooter journeys. Post his master’s, he decided to travel back home to Bengaluru from IIT Bombay on an Activa. The 2,466 km journey over 12 days was just the beginning. In 2015, he was one of the first Indians to ride across three nations—India, Myanmar, Thailand—on a 110cc TVS Star City+. From Bengaluru to Bangkok, he covered eight Indian states and 6,786 km in 25 days.

Hence, in 2016, Arunabh wanted to go on a journey that would be bigger and better than the last. He says,

This ride, 'the Buxus Quad Nation Trans-Himalayan Tour 2017,' is bound to attract more attention for one singular reason— risks. Monsoons, the off-road terrains, the torque of the scooter are very real challenges and cannot be discounted. This has not been done before on a scooter this size and to predict that I will complete the ride for sure would be a gamble. Riding across four nations with three of them having boulders and slush for roads and that too on a scooter—I would say the risks are pretty darn high.

Starting in August, the ride flags off from Mumbai, cuts across Central India to Kolkata, onwards to Dhaka, north to Bhutan, and then heads to the Annapurna Circuit and the infamous Mustang valley. He plans to ride his scooter across the Thorong La Pass at 17,769 feet in Nepal.

Facing the adversity in the Chanshal Pass at 14,000 feet, Arunabh wishes to take “an epic photograph at three of the highest Himalayan lakes.”

While Arunabh is aware that his journey will not change things drastically, he simply hopes his ride will help create awareness and, in turn, raise funds for the farmers. The journey across the four counties during the span of eighteen days is sponsored by Buxus Pro Sports and Motul, as the title and the lubricant partner respectively.

Every like and share on social media is not just for me or the sponsors, 1.2 million farmers are part of my journey this time. A small donation of Rs 100 from each social media user can raise a crore, at the very least.

Through the difficult quad-nation tour, crossing the difficult terrain with just his 100cc scooter as his companion, he hopes to make a tiny dent. A tiny effort on every individual’s part—not necessarily monetary—he adds, can ensure that a 70-year-old man does not have to hold the skulls of his loved ones ever again.