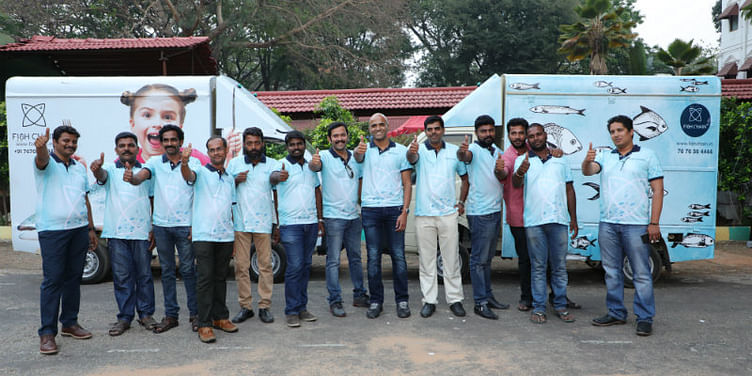 Founded as a social venture to bring fishing communities into the mainstream, Coimbatore-based seafood company Fish Chain uses modern technology to bring fresh catch from the sea to the doorsteps of consumers. The bootstrapped startup is on track to achieve $3 million revenue by the end of 2017.

India’s appetite for seafood may have grown, but the industry hasn’t kept pace. Fishing communities in India remain disadvantaged despite the growth of urban consumption due to inefficiencies in the supply chain and numerous intermediaries. Urban Indians, meanwhile, don’t have consistent access to good quality seafood at an affordable cost.

The founders of Fish Chain wanted to change this. So Coimbatore-based Fish Chain brings to consumers seafood sourced directly from fishing communities in dozens of fishing villages on the west and east coasts of India. In addition to raw seafood, Fish Chain also offers a range of pre-marinated seafood, including regional, pan-Asian and Continental recipes. Fish Chain sells supplies online and also has outlets in Coimbatore and Bengaluru. Bigbasket and Ninjacart are among Fish Chain’s B2B customers.

Where it all started

The need to start something like Fish Chain was first felt by Ray Nathan, 40. Ray, a pescatarian (follows a diet that includes fish or other seafood, but not any other meat), has lived overseas since he completed his graduation. He has been based out of the Bay Area in the US since 2015, where he focuses on managing the US operations of TIBCORP International (Singapore-based) and building the company’s investment portfolio.

It was also in 2015 that Ray founded P39 Capital, a seed fund based in San Francisco.

During a visit to India, he tried ordering seafood and was disappointed with the quality and service. He spoke to his friend and colleague, Naveen Chander, a serial entrepreneur with strong operational experience in the retail and supply chain industries. and they both decided that something needed to be done. The duo discussed their seafood supermarket idea with Rajiv Jagadeesh, a marine engineer, and obtained industry insights. Rajiv ended up joining them and became the third co-founder of Fish Chain.

Men on a mission

The founding trio decided to learn more by visiting the local fish market and subsequently the fishing harbour in southern Tamil Nadu. They learnt that the fisheries industry was largely unorganised and dominated by supply chain inefficiencies.

Further market research that involved Central Marine Fisheries Research Institute (CMFRI) and several other organisations, showed that the industry was lagging amid India’s urban consumption story and decided to do something about it.

Fish Chain has made it its mission to reimagine the seafood industry, right from the source. By cutting industry middlemen out, the startup claims to have made it possible to offer both fair wages to fishermen and fair prices to consumers.

The current team size is 85 people, including operations, procurement, sales and marketing staff spread across Coimbatore, Bangalore and 25 fishing villages on the coast.

But straight off the bat, they faced a number of challenges on the supply and demand sides.

Overcoming the many challenges

Speaking about supply issues, Ray says: “It was important to gain the trust of fishing communities to source directly. We had to confront issues caused by vested interests, including middle men/agents who had a stranglehold on fishermen.”

The lack of trust had resulted in hostile conditions for new entrants. The supply chain was also quite rudimentary and it was hard to change the way people operated. Over time, the co-founders managed to gain trust and help fishermen understand their mission and goals. Explains Ray,

It was possible due to an extensive grassroots campaign, persistent efforts to engage with the community, introduction of cashless payment systems resulting in prompt and full payment to fishermen after every transaction, constant presence of FCRs (Fish Chain Representatives) in coastal communities and our ties with organisations such as MS Swaminathan Research Foundation (MSSRF) and Amrita University.

On the demand side, they faced consumers who were skeptical about seafood vendors due to lack of trust in their quality and price-gouging approach. Fish Chain started their retail experiment in Coimbatore.

“We took extra efforts to provide greater transparency in pricing by publishing the pricelist on various mediums, including Facebook and WhatsApp. We believe that consumers have the right to know where their food originated. We provide a QR code on the box, which when scanned shows the source and date of catch along with other information,” Ray says.

Since its inception in January last year, Fish Chain set out to understand consumer behaviour in tier-2 and tier-1 cities. They started with Coimbatore and in late 2016 expanded to Bengaluru with its first experience centre/store.

In March 2016, Fish Chain launched its first fleet of customised Fish Vans, which offer a better fish buying experience and visit select apartment buildings. By February 2017, they had completed 100,000 orders and touched 10,000 customers in both cities. The startup is on track to achieve $3 million in revenue by end of 2017.

The company is bootstrapped with the co-founders committing personal funding to the tune of $5 million.

Working for a cause

What sets Fish Chain apart from other fish suppliers is that they are a social venture working to benefit low income communities on supply and demand sides.

Fish Chain's backbone is the network of small and independent fishermen from hundreds of fishing communities. By sourcing directly from these fisherfolk and cutting out the middlemen, Fish Chain has ensured that fishermen get their fair due while consumers get fresher seafood faster. Says Ray,

To ensure that our fisherfolk are paid promptly and on time, we have introduced a first-of-its-kind cashless payment system and are also plowing back 10 percent of our annual profits into the welfare of the community.

Women, who comprise nearly 40 percent of the fisherfolk community, often find themselves highly marginalised in the male-dominated industry. Fish Chain has partnered with the MS Swaminathan Research Foundation to help fisherwomen package and market their produce, with 100 percent profit going back to the women.

The social focus of Fish Chain extends beyond the fisherfolk community. The startup is keen to address the health and wellbeing of disadvantaged communities in urban spaces as well. With a team from Amritha University, Fish Chain is developing programmes to provide the healthy protein in seafood to disadvantaged urban communities.

Driven by the belief that healthy, happy children are the foundation for a better tomorrow, Fish Chain offers a range of child-friendly options for retail consumers, but also works towards providing the same health benefits to children from disadvantaged backgrounds.

According to statistics from the Indian fisheries ministry, with a market size of $50 billion, India is the world’s second largest producer and consumer of fish. The fresh meat industry, in turn, is highly fragmented, with the current size in India being around Rs 1,80,000 crore.

Fish Chain hopes to bring its unique product and service proposition to more Indian towns and cities in the coming years. As they expand, the founders want to continue to innovate on the product, focusing on marinades, given the taste and convenience factor they bring to the modern Indian household.

As a part of their social initiative, Fish Chain also plans to bring dry fish-based high-protein meals, sourced from women's communities on the coasts, to low income consumers in cities.