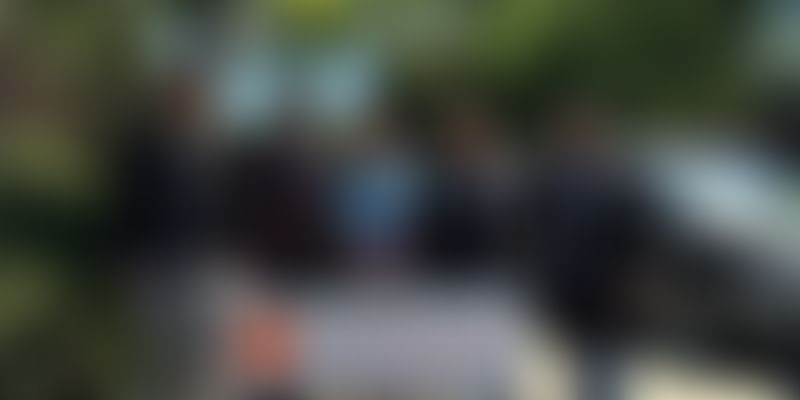 Millennials do not live in a world of ownership, but in one of rental and sharing. In fact, today, a common example that most startup mentors and speakers give is that one of the most valued car startups in the world – Uber – doesn’t own a single car.

According to a Brookings report, the sharing economy is likely to touch $335 billion by 2025.

In India, however, the idea of sharing was a novel one as recently as two years ago. It was around this time that Ashwarya Pratap Singh came up with the idea of JustRide, which later went on to become Drivezy.

JustRide was an aggregator from where one could hire cars.

The idea found ground when Ashwarya’s new Ford Figo met with an accident. “I barely used my car for more than an hour a day, and I spent a good part of my salary to maintain the vehicle. The accident made me realise that a lot of people my age might be going through the same conundrum,” says Ashwarya.

He, along with college friends Hemant Kumar Sah, Vasant Verma and Amit Sahu started JustRide, a platform that allowed people to rent cars to self-drive. The founders also roped in Abhishek Mahajan, who was working at an investment firm, as co-founder. However, people wary of handing over their car to a stranger, even for a few hours, was the main challenge.

“Our efforts were focused on building a seamless self-drive car rental service and we were successful to an extent. We were sold out on almost every weekend, but adding new cars was difficult. As our funds were limited, purchasing cars was out of the question. We had leased around 250 cars, but that also proved expensive,” explains Ashwarya.

Last year, the team came up with the idea of building a marketplace where individual car, and even two-wheeler owners could list idle vehicles and rent them out. The platform was rebranded Drivezy and followed a peer-to-peer car sharing model. It was rolled out in Bengaluru, Mumbai, and Pune early this year.

However, the problem of owners unwilling to trust strangers with their cars remained. Addressing this to some extent took the team over six months. While individual owners do see the benefit of an income from their idle cars, given the stringent regulations, a majority of those registered on the platform currently are commercial vehicle owners like tour operators.

With Drivezy, owners can list their vehicles when they aren’t using it, which is then micro leased on an hourly basis, with 25 percent of the revenue going to Drivezy.

Today, over 600 owners have partnered with the company to list 880 cars in five cities. Ashwarya says the platform is also open for motorcycles and scooters in Karnataka. Currently, the company claims it operates 250 two-wheelers in Bengaluru alone.

Of the 880 cars listed on the platform, 10 percent are owned by Drivezy, and had been acquired during its JustRide days. The remainder, which falls under the aggregator model, are on a peer-to-peer sharing model. With this new model, Ashwarya claims owners can earn close to Rs 30,000 per month.

The team is also working with NBFCs for financing arrangements. One being a Tripartite Agreement, where the owner purchases a car, registers it on Drivezy, and the revenue generated goes to the owners. Typically, tour and travel company owners and operators find this model attractive.

Cars are rented for a period of a day to a week, and are charged between Rs 57 and Rs 117 per hour, says Ashwarya.

Drivezy is also evaluating debt financing options, where owners finance the car and act as guarantors while the asset is registered with Drivezy. The revenue generated by Drivezy on renting the vehicle is used to pay off the loan. The team claims to make $950,000 in monthly GMV and $150,000 in monthly revenue.

In terms of bookings, Drivezy claims around 20,000 monthly bookings, with over 2,300 pending requests. Customers and owners are both vetted by Drivezy through registrations. In case of accidents and damages, the driver bears the cost.

Drivezy has raised approximately $8.5 million through seed and pre-series A funding from UK-based SCM Holdings, IT-Farm from Japan, Axan Ventures and Susa Ventures. Entrepreneurs and investors including Paul Buchheit and Justin Kan have also invested in the startup. Drivezy has been part of the Y Combinator for the 2016 summer batch.

“As a part of our growth plan, we are focusing on adding bike rental services to the existing menu with significant offers. Going forward, we plan to add 50 bikes and 100 cars, respectively, for the next three months. We also plan to hold a major sale of 1,000 cars on the platform in November and December, at a discount of $154,000-$230,000. Overall, we want to change the traditional way of cars being purchased, used and sold.”