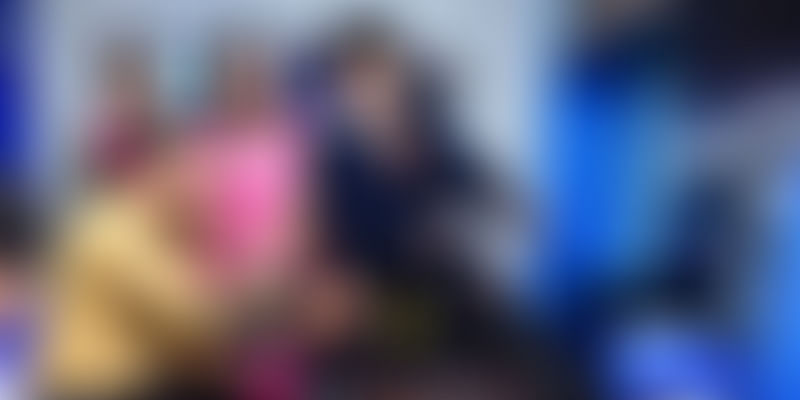 Melding power with humility is tricky. You realise this when you meet Dr Abha Agrawal; she shakes your hand hard, then suddenly becomes conscious of not intimidating you. She then stretches both her hands, welcoming you into her neat office situated in the heart of Indore’s busy street.

Umpteen questions come to your mind when you see her excited in her current role as the founder of A4 Clinics, Central India’s first Robotic Neurosciences and Rehabilitation Center.

A widely respected healthcare leader in the US and an expert in patient safety, Dr Abha prefers her role as a “patient advocate” when she is able to empathise with her patients the most.

Hailing from Kosikalan near Mathura in Uttar Pradesh, she studied medicine at SN Medical College, Agra. She then migrated to the US to pursue higher studies – a post-graduation in Internal Medicine at State University of New York and a fellowship at Yale University School of Medicine. It’s partially her upbringing and partially her experiences that after working in the US for more than 20 years, she returned to her homeland with a clear mission: to provide technology-enabled advanced healthcare especially focused on Tier-II cities.

“It really is a question of social justice. When people living in Tier-I cities have access to advanced medical treatment, why can we not provide the same for people in Tier-II cities? It’s only when everyone in India has access to high-technology medical treatment that we can bring about equality and justice,” Dr Abha opines.

She has a knack for changing situations that don’t work for her patients. While working as Chief Operating Officer and Chief Medical Officer at Norwegian American Hospital in Chicago, Dr Abha, alongside the CEO, led the financial and quality turnaround of a failing 200-bed community hospital. The hospital is now rated among the top 10 percent in the US in terms of patient safety.

“Status quo must be challenged. We should question what’s happening around us in order to bring about change. When I had joined this hospital, I realised we couldn’t go forward without addressing the challenge of quality in patient care and safety,” she says.

Dr Abha’s experience includes serving as Chief Clinical Operating Officer for IKS Health, a New York-based global technology company, and as Chief Medical Officer of Kings County Hospital Center, a 700-bed tertiary care hospital in Brooklyn, NY. She is also an experienced academician and has served as faculty member at a number of distinguished medical schools in the US, including as Adjunct Associate Professor of Medicine at Northwestern University, Associate Professor of Clinical Medicine and Medical Informatics at SUNY Downstate, and clinical faculty at Harvard Medical School (2001-2004).

“But in my heart of hearts, I am a learner. Every experience teaches you something and you become more functional and a more mature human being,” she shares.

On adopting a child as a single parent in India

Dr Abha is an inspiration to all Indian independent women who choose to live life on their terms. When she turned 44, she adopted a baby boy, Abhay. He is now six years old and studies in Shishukunj International School, Indore. She beams every time Abhay’s name comes into the conversation. “He is the joy and light of my life; nothing else in life is more joyful and more engrossing than spending time with Abhay, playing with him and taking care of him.”

How does Abhay see her busy medical life? “He has travelled with me since he was quite young. I think children humble you. You may be President of the United States to the rest of the world, but in the eyes of your children, you are just a parent. You have to accept that. I learnt while raising my son how many micro sacrifices our parents have made for us every single day,” Dr Abha says.

According to 2011 Census India, about 2.1 percent population in India (approximately 20 million people) suffers from some kind of disability such as problems in walking, using their limbs, vision impairment etc. Moreover, limited awareness about rehabilitation and poor access to high-quality rehabilitation exacerbates this burden in India.

“We aim to reduce this ‘unnecessary’ burden of disability by enabling people to be as functionally dependent as possible, one patient at a time,” she says.

“There’s a 68-year-old gentleman who has Parkinson’s. He doesn’t speak at all and can make minor movements with his hands. The moment we made him sit around our robotic device, he started to interact with it immediately through his hands,” shares Dr Abha, adding that the whole concept is based on neuroplasticity.

Neuroplasticity is the ability of the brain to repair and regenerate itself through repetitive action and plays a crucial role in the recovery of function in neurological patients.

“The human brain contains approximately 1,000 crore (10 billion) cells called neurons. These cells are connected in a very delicate and complex network (like that of a computer). Brain cells and these connections control all body functions such as walking, talking, thinking, memory, balance and coordination, standing, hand movements etc. Illnesses such as stroke or brain injury can damage these cells and their connections, and lead to patients not functioning normally. The only way to make them function is to start from the brain,” Dr Abha explains.

Robotic or cognitive therapy along with biofeedback to the brain helps these patients make real progress with body functions. “As the brain starts to get activated, damaged areas start to repair and regenerate. That’s how neuroplasticity works,” she adds.

Are there other centres in the world using robotic therapy?

“Robotic therapy for upper extremity has been endorsed by the American Stroke Association since 2010 based on successful outcomes of clinical trials and research. It is widely used for years in centres in many countries, including the US and Europe. However, A4 Clinics is the first and the only such centre in Central India,” she informs.

“Quite a lot of rehabilitation treatments are often out of the reach of people in Tier-II cities. I wanted to change that and make them affordable. Indore is now an emerging medical hub. I also realised that people here are genuine and good,” she says.

A4 Clinics has international partnerships with universities in the US, Malaysia and Ukraine to procure the best technology. The centre provides treatment to patients of all age groups – children, adults, and elderly with problems such as stroke, haemorrhage and Parkinson’s among others.

Dr Abha is committed to the cause of patients through her centre. She takes delight in delving into fields of medical informatics and robotics because “there’s no other machine in the world as elegantly designed as a human body. My goal is to understand this marvellous human mechanism through robotics and transform the lives of patients.”

“I believe patient safety should be our chief concern. In India, people are great, but we don’t have resources and lack critical thinking. If these factors come together, we can make great advancements in medical science,” she sums up.