Bitindia will take 20 percent of India to Blockchain, it’s a PayTM for Cryptocurrencies 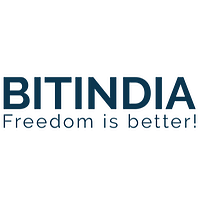 It was right in the middle of the global economic crisis that ‘Satoshi Nakamoto’, a pseudonym for a person or group of persons, released a new peer-to-peer electronic cash protocol. This new cryptocurrency, called Bitcoin, varied from traditional currencies because it was not controlled by any government. Instead, it was a “global spreadsheet” or “ledger” that leveraged the resources of a large peer-to-peer Bitcoin networks to verify and approve each Bitcoin transaction.

Bitcoin transactions have many advantages including ease of transfer, freedom from regulation, security, transparency, low fees, and reduced risks.

Earlier this year, a graph on howmuch.net showed that of the total money in the world – roughly $84 trillion – Bitcoin accounted for $41 billion. Add other cryptocurrencies such as Litecoin, Monero, Ethereum and others to that number and the total amount in cryptocurrencies comes out close to $100 billion. Not exactly loose change!

It’s still early days for cryptocurrencies in India, with only 0.5 percent of Indians taking to Bitcoin. And yet, India accounted for almost 10 percent of global cryptocurrency trades in May 2017, according to thequint.com. While regulation is yet to catch up, efforts are on to integrate blockchain technology into various sectors of the economy – including financial services and healthcare. In 2016, ICICI Bank announced that it had completed a cross-border transaction via blockchain. In September, the Institute for Development and Research in Banking Technology (IDRBT) under the Reserve Bank of India, announced plans to launch a new blockchain platform.

Given that the Indian government wants to boost a domestic cashless economy, lasting solutions are needed to solve the challenges people will face to make that move: these include financial inclusion, high setup and transaction costs, and transaction times.

With cryptocurrencies increasingly entering the mainstream, what’s needed is an easy-to use service that encourages the average consumer to use it more. Imagine, if you can, a service like the “Paytm for cryptocurrencies”. And that’s what BitIndia has set out to do.

India’s first digital currency wallet, BitIndia is a secure way to buy and sell Bitcoin, Ethereum, Ripple, and Litecoin in India. Founded by Sahil Kohli, Saumil Kohli, Kunal Nandwani and John McAfee (yes, the creator of the globally recognised anti-virus software), BitIndia is an open source platform that allows users to make secure transactions and hold the private keys of their cryptocurrency on the blockchain nodes. John McAfee recently tweeted about Bitindia and its potential.

While BitIndia wallets aim to make blockchain mainstream in India, the BitIndia Exchange will allow regular people to understand, buy, hold and sell cryptocurrencies. The vision of the founders is to make Bitindia a part of people’s daily routine such as buying groceries, paying bills or eating out, with cryptocurrencies as a medium of exchange/payment.

The BitIndia exchange will allow its users to trade essential cryptocurrencies with Indian currency. This will not only promote various cryptocurrencies in India, but also promote blockchain technology globally.

More on this soon. Watch this space!

[Jobs roundup] Keen on hiring? Then check out these HR manager roles