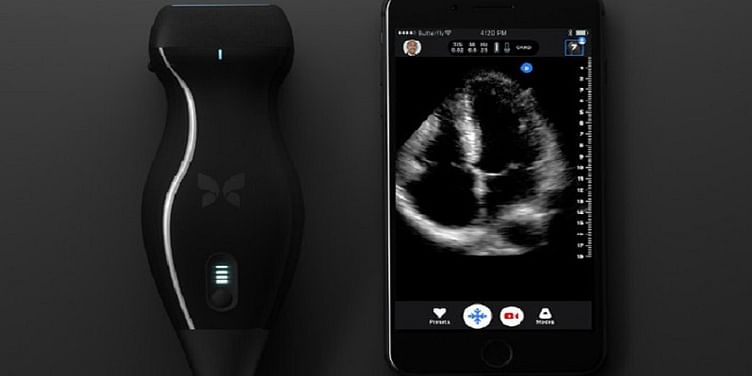 US researchers have developed an iPhone-based portable ultrasound machine that can help detect cancer easily at home. The device, called Butterfly IQ, is a scanner the size of an electric razor that can display black-and-white imagery of the body when paired with an iPhone.

Developed by Connecticut-based startup Butterfly Network, the pocket-sized device works by shooting sound into the body and capturing the echoes. Usually, the sound waves are generated by a vibrating crystal. Butterfly's machine, instead, uses 9,000 tiny drums etched onto a semiconductor chip, reported MIT Technology Review on Friday.

Earlier this year, John Martin, a US-based vascular surgeon and chief medical officer at Butterfly Network, discovered a cancerous mass in his own throat while testing the device. Feeling an uncomfortable thickness in his throat, he had oozed out some gel and run the probe along his neck. On his smartphone, to which the device is connected, black-and-grey images quickly appeared. He found a 3-cm mass that was diagnosed as squamous-cell cancer — a form of skin cancer that develops in the cells of the outer layer of the skin.

The device gives you the ability to do everything at the bedside: you can pull it out of your pocket and scan the whole body, Martin said.

The company now plans to combine the instrument with artificial intelligence software that could help a novice position the probe, collect the right images, and interpret them. By 2018, its software will let users automatically calculate how much blood a heart is pumping, or detect problems like aortic aneurysms, the report said.

Butterfly IQ is the first solid-state ultrasound machine to reach the market in the US. It should go on sale this year for $1,999 — far less than any other model on the market.