A century-old village school battles for its existence 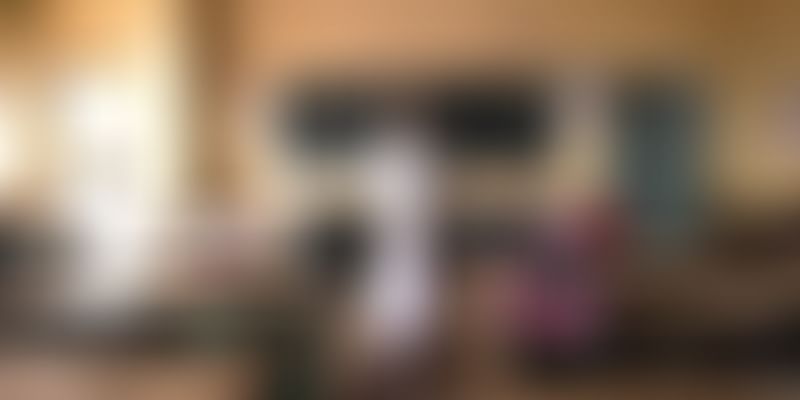 Started in 1922, Janatha Higher Elementary School in Adyanadaka is just four years short of celebrating its 100-year-old existence. But not before it restores its collapsing parts.

Situated in the quaint village of Adyanadka in South Canara, the Janatha Higher Elementary School has stood tall through decades of upheavals and adversities to educate many generations. However, Ashwini Krishnamurthy, the correspondent of the oldest shaale in the region, is scared that the school might not be able to celebrate its centenary.

Ashwini’s father-in-law had entrusted her with the task of taking care of this school. Disheartened by its sorry state today, Ashwini was about to draft a letter to the founder of Google seeking help, before youngsters like Shaktiraj Jadeja and Pankaj Singh decided to start a crowdsourcing effort to support her cause.

The presence of the school runs deep

“It is amazing how deep the presence of the school runs in the nearby villages. Almost every household in Adyanadka has someone who was educated at this school. We wanted to showcase the special sense of connection people from this region have with the Janatha Elementary School, and that’s how we decided to shoot the video, to spread a word about this noble cause,” says Pankaj who helped in creating a small video that portrays the grand legacy of this timeworn school.

A Place For Tomorrow from Untold on Vimeo.

For years now, Janata Elementary School has served as an anchor for many people across generations who left to pursue better career opportunities in various cities. “In this context, the school ties them back strongly. Moreover, it has done so much, for so long, thanklessly,” Pankaj adds.

However, the school that has ensured the education of the people of the district, is now on the verge of shutting down due to the lack of proper infrastructure. Crumbling parts of the building, dearth of classrooms and lack of basic facilities like library and buses for commute are threatening the unhindered functioning of this school.

The Janatha Elementary School, which started in 1922, got recognition from the then Madras government in 1948. The same year, a trust named Vidya Vardaka Sangha was formed to ensure its smooth functioning.

The school expanded to having a high school in 1964 and a college in 1994. At present, it conducts classes in English medium for children from grade one to ten. Though it has the capacity to educate close to 2,000 students (in both Kannada and English as the medium of instruction), there are now only about 600 students enrolled at primary, higher and college levels.

“The school has ensured quality education for poor kids of this region for almost 100 years now. Despite its long-standing existence, we now have a lack of infrastructure which is making many students drop out. Parents also prefer city schools which promise their children better facilities,” complains Ashwini Krishnamurthy as she talks of the leaking classroom ceilings that bother the students during monsoons.

Many years ago, when the school faced a similar crunch, the villagers of Adyanadka came together to raise funds for the necessary repairs. “However, this time it’s beyond our reach. We have already put in our personal savings to add a new building. Still we need more money for proper plastering, inducting new school buses, and paying salaries to teachers on time. Hence, we hope the public will come forward to help,” shares Ashwini, whose entire family studied at the Adyanadaka School.

“My husband, cousins, children were all schooled at Janatha shaale. Even my maternal grandmother went to classes here. At one point, as many as 900 students studied here. So, for the people from this area, the school is more like a part of nature. The sepia ruins of its crumbling building, the canopy of the surrounding trees, the wall that borders Kerala, and the playground are all testament to a bygone era and its memories. I truly want this legacy to continue and educate future generations,” says Ashwini optimistically.

In the 2011 Census, Dakshina Kannada topped the list of most literate districts in Karnataka with an impressive literacy rate of 88.57 percent. The students from this district have repeatedly brought laurels by topping several state exams. In this context, institutions like the Janatha Elementary School in Adyanadka have played a vital role in educating the children in the South Canara region for ages now. And it’s more than important that this shaale gets to exist in the coming years and continues to lead generations towards a bright future.