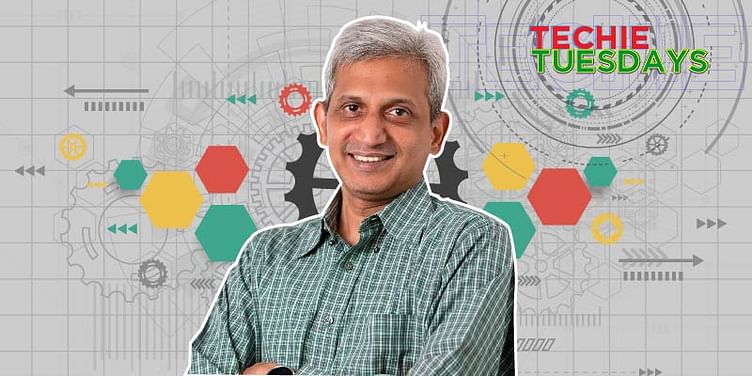 In this week’s Techie Tuesdays, we speak to CTO of Accel Partners, India, Vasan Subramanian. In a career spanning three decades, Vasan has built technology products at startups and large companies. In his current role, he advises portfolio companies on technology, and helps evaluate tech startups and in due-diligence.

If you have a certain image of how a CTO of one of the largest and most successful investment funds in India should be, Vasan Subramanian is probably nothing like it.

Vasan graduated from IIT Madras in 1987, and later from IIM Bangalore, since the beginning has pursued his love for building technology products.

In this week’s Techie Tuesdays, YourStory speaks to Vasan to know more about his tryst with technology over the last three decades.

Vasan was born in Chennai and studied across the country at Madurai, Chennai, Kolkata, Delhi, Tiruvanthapuram, Srinagar, and Hyderabad given his father’s job with the postal department.

Vasan was not really inclined to put in much effort in studies, though he scored well. His interest, however, was in volley ball and he was a part of school team.

The ‘Jedi’ at IIT Madras

Vasan ranked 85 in IIT JEE, and chose IIT Madras. However, he has one regret to date. “In those days, Computer Science (engineering) at IIT Madras used to close at ~AIR 100, so I was confident that I'll get that. I gave IIT Kanpur (CS) as first choice and IIT Madras CS second. Even after my father insisted that I should put IIT Bombay CS as third choice, I didn't do it because I was confident of getting second option.”

He got his third option, which was IIT Madras Electrical (Electronics) Engineering.

At IIT Madras, Vasan was among the youngest in his batch. Labeled ‘Juvenile Delinquent’ by seniors, shortened to Jedi, which became his ‘identity’ in the days to come.

While volleyball and theatre held his interest, Vasan also gravitated towards software development. This led him to take up extra courses in programming (Data Structures algorithms, Artificial Intelligence), which were offered to M. Tech. students, and he also learnt programming language Pascal.

Vasan also spent time fixing keyboards for a senior and helped build a connector, chip and the entire circuitry to synthesise sound. So involved Vasan was in the project, that he couldn't complete his own project, which was printing a vernacular font.

It (a dot matrix printer) didn’t have the ASCII codes of characters in its memory for Indian fonts. So, you got to develop that, feed in intermediate driver programme. We didn't have Unicode those days. So, there was mapping of certain character set which was fed into intermediate driver programme. This converted to graphic map of the equivalent. The challenge was that the characters in Indian fonts are of variable lengths. Those days we had dot matrix printer with nine (8+1) pins. So, we had to use the bottom pin more often than not (two swipes) to have one character printed.

Vasan applied to universities abroad to study computer science, but couldn’t get through because his grades were low and he had to entirely depend on scholarships.

Joining TVS Electronics, Vasan thought he would work on both software and hardware, but later realised he was in the testing department, not R&D. He worked on automating the testing of PCB (Printed Circuit Boards), and with an interest in C language and Assembly programming, Vasan sought work on a project.

Circuit diagrams and PCBs are not correlated in terms of location of elements, and there's no index giving the location of resistors, capacitors and other elements of PCB. To solve this, Vasan took the image produced by the autocad of PCB, converted it to bitmap and wrote TSR (Terminate and stay resistant programme).

Vasan resigned from TVS Electronics at the end of his first year to study Computer Science at IIT Madras, and within a week was bored. Seniors at TVS Electonics asked him to return and he did. Only a couple of years later, Vasan realised he wouldn’t get a computer science this way. He then wrote CAT and joined IIM-Bangalore in 1991. “IIM was not expensive those days. I remember going into college with Rs 50,000 in my bank and coming out with Rs 20,000.”

Vasan’s strategy for a pure software job worked, and he joined Wipro after IIM. He joined as project lead and worked on a project to build an MRP engine (for ERP solution) called Insta MRP which was a part of InstaPlan. He designed most of it and coded a part of it.

Vasan later worked on a project for Ventura Inc - a company that makes a desktop publisher, and finding it interesting, relocated to Canada. Ventura filed for bankruptcy within four months, and was acquired by Corel.

Back in India, Vasan worked on telecom billing product Teleprodigy. It was one of the few products initiated by Wipro, and saw reasonable success. As a part of Teleprodigy, Vasan and his team wrote the backend for Airtel for billing dial up internet connections.

Vasan was the architect of the product and his team used Java in front end and Oracle in the backend. It was client-server technology and the team also built a portal for clients (Airtel, Mantra) which gave customers a view of their bills.

Wipro was one of the first to start using servlets. Vasan also worked on ServiceEdge - a request tracking system for Canon (printers). Promoted to the position of business unit head, Vasan was exposed to sales and business side of activities.

Management changes with Vasan keen to get closer to the technology side, he decided to move on.

Vasan says his eight years at NetContinuum were the best years of his life. He worked on command line interface, PCI bus, linux distribution, upgrade strategy, testing automation framework among other things.

Four years in NetContinuum and Vasan took over as the operations and engineering head of India. The company moved to building a web application firewall to protect web servers. Vasan adds, “Originally, it was built as a hardware product because we thought it'll be much faster. It ran on our compiler. The configuration (UI, GUI, command line interface etc) was running on top of a Linux system. GUI was written in Tomcat and Java and front end was Java based client.

In three years, the founders ran out of money and the company was acquired by Barracuda Networks in July 2007. For next one year, Vasan worked on simplifying the product for the new user base. He replaced NetContinuum’s TCP/IP stack with regular kernel TCP stack. A year after the acquisition, he decided to leave the company.

Starting up with Insta Health

At this point, his ex-boss from Wipro Ramesh Emani offered him to join his startup - Insta Health Solutions as a tech co-founder. The idea was to build a Hospital Management System (HMS) for the developing markets. Vasan says, “There were million-dollar products or $30000 low quality CD products. The market was highly fragmented because the decision makers/buyers didn't understand tech. That was the time SaaS was started becoming popular. So, we thought it's a good time to build a SaaS business.”

However, in 2008, there was no one building SaaS-based healthcare solutions in India. Vasan and other co-founders learnt it the hard way that they were a little early as most places didn't even have reliable internet. Insta Health inherited the stack from another company that built a preliminary version of the software. It was Java, J2EE, Tomcat, Struts, HTML CSS front end. While porting to SaaS, Vasan removed most of the third-party tools from front end and started using Yahoo UI. The team built its own CSS library. It took them almost an year to build. Vasan says, “Looking back I think that I should have build the product from the scratch (instead of inheriting it).”

Since the team realised that SaaS isn't going to work because of internet issues, they restructured it in a way where clients owned the server (specifications mentioned by Insta Health). They installed Insta Health’s software in it and through internet maintained complete control of it. Tech team used to do debugging, upgrade, maintenance through the VPN.

In 2011-12, internet became stable in cities, and Vasan decided to move to SaaS model again. Insta Health’s sweet spot lay in targeting chains of hospitals and clinics. By 2012, the company hit break-even but it could never really make it to the next level. Vasan says, “We had outstanding collections of more than $500,000 at one point because clients simply didn't pay on time. I called it a 'carpenter's dilemma' - you don't pay a carpenter till he puts the last screw. Similarly, clients will have a long list of requirements and even when we couldn't match one, they won't pay us. They consider payments as their only hold on us.”

Moving on - to Accel, India

By 2013, Vasan realised he wasn’t adding a lot of value to the company. He also wanted a more stable job. So, he quit and got through an American company that was setting up operations in India. But the very next day, he got an offer from Accel Partners, India, and he joined Accel. The fund was looking for in-house expert to advise portfolio (in tech) and help in evaluation of tech companies.

For more than a decade Vasan has been in the thick of things. Vasan summarises his experiences at Accel as:

Here, I’m exposed to much wider varieties of technologies to build applications, micro services etc. That's the good part. The not so good part is that I wasn't getting my hands dirty - it itches that I'm not building anything. So, I'm trying to balance both the sides. Within Accel, I'm trying to see if I can have a deeper engagement with one or two of the portfolio companies where I'm writing code, solving problems, deciding design.

Vasan believes that even though tech plays a critical role in a startup, you don't really have to evaluate only company's tech to define its success. He adds, “You’ve to evaluate its business idea, approach, total addressable market and the team.”

One of the key tasks Vasan looked into at Accel was to help with hiring in the tech leadership among portfolio companies. He follows a three-pronged approach depending on the company and stage:

Vasan believes most CTOs are extremely talented. There may be fitment issues in terms of technologies (their expertise differ from what's required). He hasn’t seen companies executing tech badly but he does find a problem in many startups in product management. He adds,

First of all, many companies don't have product manager. The CEO says I'm the product manager but he/she is always traveling. How we manage our backlog? How do you streamline the input into the engineering team for development? Product management isn't a mature function in India yet.

At this point, there are two big things in Vasan’s life.

Vasan makes decisions analytically. If there's no information, then he goes by gut feeling. He explains,

Vasan believes the techies today are doing a great job. To the fresh graduates, he would like to say - “try to work in a team and remember while building that there are always two customers to what you write (code) - end user and the next person who's going to maintain your code.” He has often seen senior guys over-engineering stuff. They get over enamoured by tech and aren't solving the right problem or using right tools to solve the problem.

You can connect with Vasan on Twitter and LinkedIn.