China’s mobile economy: from ‘Made in China’ to ‘Innovated in China’ 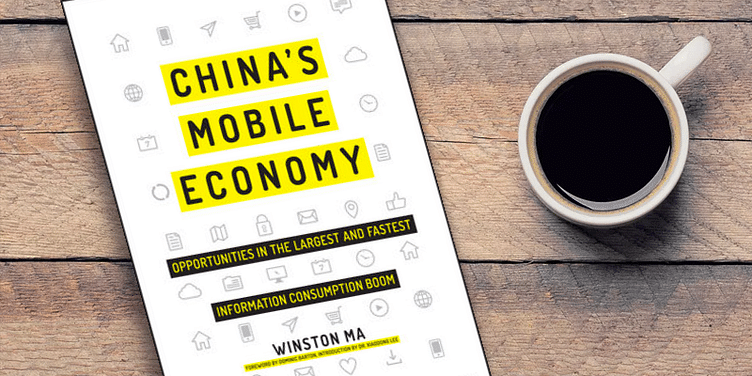 China is transforming from a trend-follower and cheap imitator to innovative trend-setter and global powerhouse. This new book covers business dynamics and global implications of Chian's mobile boom.

Winston Wenyan Ma is the managing director of the China Investment Corporation (CIC), the sovereign wealth fund of China. He was earlier at Barclays Capital, JP Morgan, and Freshfields. His earlier book is Investing in China. See also YourStory’s reviews of the related books China’s Disruptors, Alibaba, China Fast Forward, and Startup Asia.

China’s middle class is already the size of the entire US population. China overtook the US to become the largest e-commerce market in the world in 2013. Mobile internet usage has exceeded desktop internet usage. Half of Chinese consumers are buying groceries online (twice the global ratio, according to Nielsen).

Driving forces for the scale and pace of the mobile economy in China are urbanisation, information consumption, and consumer appetite for deals and digital media. There is demand for local as well as imported goods.

The government is also pushing the ‘Internet Plus’ action play to drive the digitally-enabled economy. Information-related consumption is regarded as a related growth engine. Other initiatives include Broadband China and smart cities.

November 11 is regarded as Singles’ Day in China and has also become the largest online shopping day in the country. For Alibaba, the 24-hour e-commerce extravaganza accounted for GMV of $14.3 billion in 2015 and $25 billion in 2017. Many of Alibaba’s vendors are in the village of Qing-yan-liu, which now has more e-commerce-related shops than households.

The BAT companies (Baidu, Alibaba, Tencent) are regarded as the Big Three in search, e-commerce and social messaging. They are expanding into each others’ turfs as well as other sectors like group-buying, food delivery, taxi-hailing, healthcare, finance, advertising, media and even connected cars. Other large players are Xiaomi, Huawei, ZTE, Lenovo and LeTV (media content).

Alibaba has also invested in handset maker Meizu and web browser UCWeb. Alibaba’s Taobao and Tmall reportedly account for more than half of all parcel deliveries in China. Other e-commerce players include VIPshop, the largest flash-sale website.

JD.com operates its own logistics services, while Alibaba relies on third-party providers (though it has invested directly in some of them). “China’s new rural areas have become the largest new battlefield,” observes Ma, with Alibaba launching initiatives such as Taobao Villages for creating new hubs.

“To a large extent, mobile internet strategy will separate the winners from the rest of the pack in their competition for Chinese customers,” says Ma. Industry investors are also appreciating the new multi-layered and interlocked business models of the leading tech firms. New features like voice recognition are becoming widely popular and circumvent some of the challenges of keying in Chinese characters.

Mobile payment is much more widely used in China than in the US or Europe. “Social networks have a tremendous influence on customer purchasing decisions,” observes Ma. WeChat has introduced targeted marketing to ‘circles of friends.’

At the same time, however, there are many scammers, counterfeiters and fraudsters online, but tech players are becoming wiser to the game. They are resorting to measures like filing reports with WIPO to prove they are taking corrective action.

Retail, O2O ‘experience consumption’ and entertainment are areas being rapidly transformed by mobile internet. With models like “smart plaza,” O2O is the “biggest cake” left in e-commerce, according to commercial property giant Wanda.

The tech players have also taken a stake in offline retailers such as Suning (Alibaba) and Yonghui (JD.com, the largest online retailer). Alibaba is like a combination of Ebay, NetFlix and PayPal, whereas JD.com is like Amazon with UPS. Ageing consumers are also using O2O models for domestic and medical services.

Mobile entertainment in prime time and ‘fragmented time’ attracts users and generates revenues, while building useful consumer behaviour profiles. China’s Internet giants are now not just distributors or aggregators of content, but producers and investors as well. They are going beyond co-production with US studios to full-fledged independent production. Consumer data mining helps search for elements of potential hits. Alibaba is creating a “continuous feedback loop of online consumption of both merchandise and entertainment;” it has invested in Paramount Pictures as well.

Chinese tech firms have thus evolved into media companies and are now creating their own blockbuster movies for the big screen and at offline cinemas, even competing with Hollywood. The next target is creating Chinese movies with global appeal.

Chinese companies are expanding into emerging economies as well as the US and Europe, and investing in Silicon Valley startups. At the 2016 Consumer Electronics Show (CES) in Las Vegas, a third of the exhibitors came from China, with drones, robots, electric cars, VR headsets, smartphones and more.

Alibaba listed on NYSE and JD on Nasdaq; they have also expanded into cross-border trade via TMall (Alibaba) and JD Worldwide (JD.com). Alibaba has also invested in India’s PayTM, and in US tech firms like TangoMe, ShopRunner, Quixey, Lyft, Snapchat and Groupon.

Chinese and Western tech players are competing in the markets of Africa, and Chinese firms are moving beyond early stereotypes of low-cost low-quality. But the messaging and social media players from China are facing tough challenges dealing with Western social media firms overseas; WeChat’s expansion seems to be limited to Southeast Asia.

ZTE is expanding into handset patents, 5G and connected cars, and has increased the brand perception of its smartphones in the US. Lenovo bought Motorola Mobility in 2014. Huawei is a global player in fixed and mobile broadband.

Xiaomi is selling smartphones in India, but faces challenges in localising in Indian languages without driving costs too high, catering to the needs of some consumers who prefer buying phones in stores rather than online, and dealing with IP lawsuits.

China is a significant market for new overseas players, and older players have to revamp their digital strategies. There are challenges, however in terms of language, culture and regulatory environment.

Before the Uber-Didi merger, Uber’s top three most popular cities worldwide were all in China: Guangzhou, Hangzhou and Chengdu. Foreign luxury brands are becoming increasingly popular in China, via e-commerce imports (Amazon is one of the stores on TMall). Apple has become a luxury brand for smartphones in China, eg., its golden versions.

Investors like Softbank (Japan) and Naspers (South Africa) have found notable successes in China via investments in Alibaba and TenCent. Other investors active in China are from the US (Tiger, Coatue, Farallon), Singapore (Temasek, GIC), and Russia (Yuri Milner). In the period 2004-2014, the number of unicorns in China was 26; more than Europe (21) but less than the US (79).

In sum, China’s innovation ecosystem is being powered by successful ex-BAT entrepreneurs, Western-returned Chinese engineers and managers, angel investors and VCs, and a massive talent pool of half a million graduating engineers each year. The next tech wave from China will expand beyond smartphones into IoT, connected devices, AI, smart cars, and more.

Measure these 5 parameters to determine your success as a leader