10 trends that would shape the future of data analytics 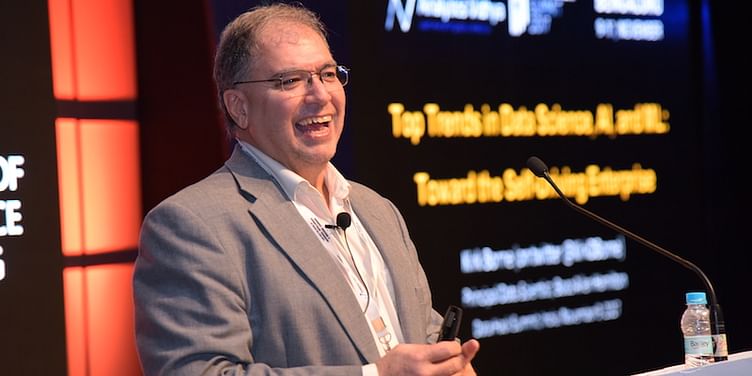 We have heard terms like ‘artificial intelligence’ and ‘machine learning’ bandied about often, but do we really know what they hold for us in the coming days?

Data Science may have become hot in this decade, but its existence can be traced back to more than a couple of decades ago. A lot of academic research took place in data science (data mining) then, but there was no application in the market; it was all theoretical and mathematical. Real change came with the combination of three favourable situations:

Kirk Borne, Principal Data Scientist and Executive Advisor at Booz Allen Hamilton, shared some nuggets of wisdom in the field of data analytics and prediction, at the recently concluded DataHack Summit. Given his experience in the field of astrophysics, he emphasised the need for companies and individuals to be inspired and illuminated in the world of analytics. Borne believes that the following 10 trends would shape the future of data analytics. Our stories have been referring to some of these terms for quite sometime but listing them together makes it a more definitive list:

1. Internet of Things (IoT): This is nothing but evolved wireless networks. It's common to have censors taking into account multiple fit-into gadgets like fitbit bands to jumbo jet engines. The Internet of Things market is expected to grow from $170.57 billion in 2017 to $561.04 billion by 2022, owing to the advent of advanced analytics and data processing techniques, which have been useful to derive results from high volumes of data collected from the machine-to-machine communication devices.

2. Hyper Personalisation: In today’s evolving hyper retail markets, it has become an indispensable part of marketing. The better you know a consumer, the better your chances of selling your product (or selling through your channel) are. The data from your phone is continuously being analysed to create your online persona and provide services/products to you the way you would want it. With Google Home and Amazon Echo, this is going a step further.

While a sophisticated AI program is certainly capable of making a decision after analysing patterns in large data sets, that decision is only as good as the data that human beings gave the programming to use. The choice of the word ‘augmented’, which means ‘to improve’, reinforces the role human intelligence plays when using machine learning and deep learning algorithms to discover relationships and solve problems.

4. Machine Intelligence: It’s basically the theory and development of computer systems is to be able to perform tasks, normally requiring human intelligence. It often refers to machines that learn but are aligned with the biological neural network approach.

Numenta’s technology, Hierarchical Temporal Memory (HTM), is the best example of the Biological Neural Network approach. Its systems are able to learn the structure of streaming data, make predictions and detect anomalies. They learn continuously from unlabeled data. By taking a robust biological approach, the brain gives a roadmap of where to direct their work in the future.

5. Augmented Reality: This will enable better performances of organisations with the help of available data. This segment has moved on from just being used by the gaming industry. The recent launch of Apple ARkit has now made it possible to develop AR apps in bulk and also given the power of AR to iPhone users. Development and growth of Google’s Tango will further boost it.

6. Behavioural Analytics: This helps in using traditional physiology to aid in marketing to individuals. It is believed to be an effective tool to understand human behaviour in controlled environments. Behavioural analytics and personalised messaging empower brands to turn normal users to highly engaged power users.

Behavioural analytics has applications beyond that of marketing and customer intelligence as well. One can use sensor data to track traffic patterns (smart cities), to know if cold storage chains have been broken or medication has been compromised during shipments.

7. Graph Analytics: It’s a set of analytic tools used to determine strength and direction of relationships between objects in a graph. By mapping relationships among high volumes of highly connected data, graph analytics unlocks more insightful questions and produces more accurate outcomes. Some of the potential business use cases for graph analytics include:

8. Journey Sciences: Effective in understanding the shifting data, its science is applied to a journey of a customer or patient, or employee or a machine. Borne explains,

You collect data to follow the path, and those data points give you information about what's happening, where it’s going, what you can do to predict the outcome, and also understand conditions and context to which some of those things happened, and then how you can change it to get positive outcomes. Specifically, customer journey for buying your product and patient journey ending up in a particular disease.

9. The Experience Economy: It’s an economy where organisations reimagine and shape customer experience in a way that creates a memorable event.

The rise of the experience economy is one of the most important global trends in marketing. According to Zoe Lazarus, Global Future and Culture Planning Director at Diageo,

Now, more than ever, consumers desire unique, spontaneous and immersive entertainment wherever they are. They want multisensory experiences, beyond sight and sound. However, they don’t want to be restricted to specific venues or times for their entertainment, and crave experiences that say something unique about them, which they can share with their friends and followers.

10. Agile Data Science: Agile Data Science is a lean methodology that is adopted from Agile Software Development. It is a development methodology that copes with the unpredictable realities of creating analytics applications from data at scale. At the core it centres around people, interactions, and building minimally viable products to ship fast and often to solicit customer feedback.

Borne concluded by stating the need to be at the edge of data collection in order to optimise the desired outcome.