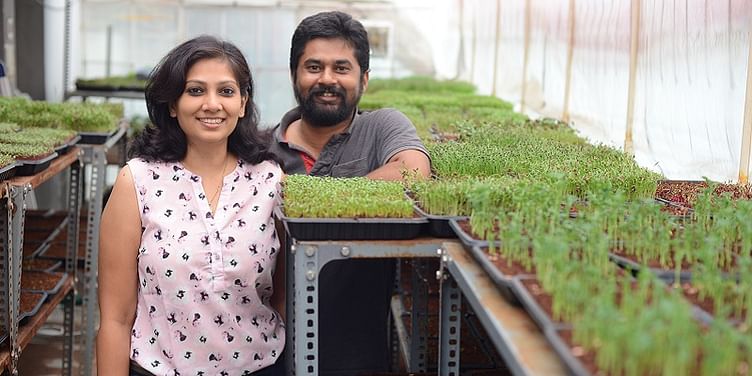 Farmers as well as urban individuals are adopting organic farming practices and reaping more benefits; the more organic and natural the produce, the safer and healthier it is for us and for the environment

Farming, as we know, is a traditional occupation that’s been followed since time immemorial. But the organic farming concept is gaining prominence in India not only in the farming community, but also among the city dwellers as we can see a lot of individuals venturing into this field.

So what is organic farming?

According to the United States Department of Agriculture (USDA) study team,

Organic farming is a system which avoids or largely excludes the use of synthetic inputs (such as fertilisers, pesticides, hormones, feed, etc.) and to the maximum extent feasible relies upon crop rotations, crop residues, animal manures, off-farm organic waste, mineral grade rock additives and biological system of nutrient mobilisation and plant protection.

Though the concept is not new to us, we are seeing a rise in organic farming, as it is the need of the hour. Consumers are becoming highly conscious about their health and the foods they consume — more and more people are opting for organic food to avoid the consumption of foods that are grown using chemical preservatives. Hamsa V, who runs a hydroponic farm called Growing Greens, along with co-founder Nithin Sagi, says,

A time where more and more conventional farmers are opting out of farming, but the mouths to feed are increasing exponentially day by day, it is crucial that more individuals/government bodies should take up farming to maintain the balance.

In order to yield early and abundant produce, a lot of farmers in the rural areas have been using chemical fertilisers, pesticides and hormone applications — also due to a lack of knowledge. But this is gradually changing as more farmers taking the organic route.

There are also some urban Indians who have decided to venture into this field, either by producing or supporting farmers to yield fresh and unadulterated produce that is healthy for consumption. Also, with more number of people preferring to consume organic food, and with the number of organic e-commerce stores popping up in various cities, it seems like people are moving towards the right direction.

After working in the IT industry for 18 years, Bangalore-based Laxminarayan Srinivasaiah, decided to take a sabbatical from work to concentrate on farming, quoting sustainability as the key reason. In 2007, there was a small financial meltdown and that’s when he started to think about job sustainability, which is what drove him to start farming.

One thing for sure about IT is that is getting monotonous and is not quite challenging. So, farming as a profession is an interesting alternative for sure, although I have to agree you can't earn money though. That's the irony, he states.

At present, Laxminarayan and his team work on the concept of community farming, called Bettada Budadha Thota (BBT). It was started towards end of 2012 by a group of like-minded friends, many from the IT field with one person from an agriculture background. The farm is located almost 70-80 km away from Bengaluru. He says,

We were 11 of us when we started and continue to be together today. The idea was to grow everything that we wanted to eat. And not really look at the commercial aspect of it. So far we have been growing food grains, horticulture crops, and fruit crops, and so on. Whatever we grow is for our own consumption. But there are a lot of friends who know about our farm, so they visit and pick whatever veggies or crops they want.

Mumbai-based Gaytri Bhatia, who believes farming is a lifestyle, quit her job as an Environmental Analyst to the US Environmental Protection Agency (EPA) to take up farming.

It's when I heard the words like ‘DDT’, ‘urea’, ‘round-up’, from the farmers of my community — farmers who knew very few words in English — that I became absolutely committed to the work, adds Bhatia, who runs an organic Vrindavan farm in Wada, near Mumbai.

Back2basics, which is the brainchild of S Madhusudhan, is an organic farm that produces high-quality organic fruits and vegetables, and the farms are spread across close to two hundred acres around Bengaluru. Run by a father-daughter duo, Back2basics supplies produce to reputed grocery chains, retailers, organic stores and gated communities in Bengaluru.

Their produce is also exported to organic chains and retailers in other parts of the world. Another such venture is Organic Mandya, started by Madhu Chandan and his four member team in 2015. The main idea came from Madhu, who wanted to educate the farmers about various farming practices. After they created a society, they went on to buy the farmers’ produce and sell it, and that’s how Organic Mandya (located on the Bangalore-Mysore highway) came into being. So everything that the team and the other farmers grow in the farms, are packed under this brand.

Hamsa stands by the fact that organic farming is gaining popularity. “More people are moving towards growing and consuming organic food. For instance, entire Sikkim has moved towards organic farming and Andhra Pradesh is also driving farmers to move completely towards natural farming,” she adds.

Despite the fact that some of the urban individuals are taking up farming, more awareness needs to be created. For instance, Hamsa says,

Organic farming communities should conduct various workshops on cultivation methods, pest management and long-term benefit of going the organic way by showing the sustainability of these practices. Organic farmers should encourage other farmers/individuals/corporate groups to visit their farm and learn about their best practices.

Laxminarayan says, “We can say that we (BBT team) have created an increased interest amongst many people towards farming for sure. We often get a lot of questions, doubts etc., but there is always a sense of worry and fear in adopting the same. We hope to make a difference by our actions and perhaps these get addressed adequately in future.”

“Organic farming needs more knowledge, transparency and farmer-buyer relationship for the simple reason that you should know who is growing your food, where is it coming from, and how is it being grown,” states Kavya Chandra, founder of A Green Venture, an eco-enterprise that curates experiences and learning that connects one to natural, chemical-free food at farms, and influences lifestyle and habits through various workshops and platforms.

While the Government of India recently implemented the National Programme for Organic Production (NPOP) that involves the accreditation programme for Certification Bodies, standards for organic production, promotion of organic farming, etc., there are still certain issues that needs to addressed — the food needs to be genuinely organic, which includes the entire process of growing to packing to delivering at the stores.

Supporting small groups, collectives or a system which gives us a window to learn how organic farming is practised will give us the better picture and allow buyers to make the right choices.