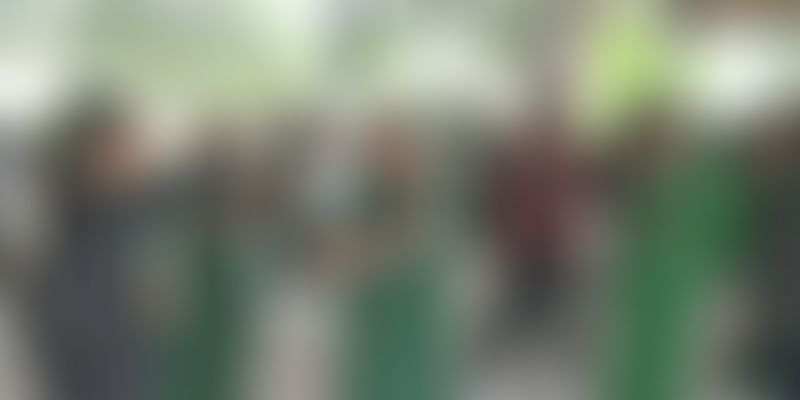 A group of 30 women clad in green sarees has pledged to eliminate liquor and drugs from their village.

We are used to hearing about women in rural areas being subjected to atrocities like domestic and dowry-related violence, rape, and honour killings. However, a different narrative emerged when the Gulabi Gang, led by Sampat Pal Devi, fought these brutalities in the Bundelkhand region of Uttar Pradesh.

Now, the state has another all-female group of activists bringing public attention to the largely unknown village of Khushiyari in Varanasi district. Here, a group of 30 women clad in green sarees, popularly known as the Green Gang, have pledged to rid their village of alcohol and drug addiction. They begin by asking the menfolk to quit their vices; if that fails, they resort to muscle power. Since the establishment of the group in 2015, Khushiyari has become liquor and drug-free

The birth of the warriors

The group is the brainchild of students of Kashi Vidyapeeth, Varanasi and Banaras Hindu University, who encouraged these women to stand up for their rights.

In 2015, Divyanshu Upadhyay and Ravi Mishra, both students at the university, established Hope Welfare Trust to eliminate poverty.

Recalling the incident that led to the formation of Hope Welfare Trust, Divyanshu says he and his friends were returning from a birthday party when, sitting on Assi ghat, “A lady and her two children were looking for some food in the garbage. The women managed to get some bread and offered it to the kids. That one moment of realisation — how helpless we are as human beings — really compelled us to do something for society.”

Divyanshu, Ravi, and a group of their friends consequently started off with a cleanliness drive in Varanasi. They then set up Hope Welfare Trust, which took up social work like working towards the eradication of poverty and providing education to underprivileged kids in nearby villages.

On a visit to Khushiyari, the group found that while the village was lacking in basic infrastructure, it had an abundance of alcoholics and gamblers. It was no surprise, then, that pretty much every woman in Khushiyari had been subjected to domestic abuse.

“When we first went to the village, the women were reluctant to talk. They did not respond to us and asked their husbands to speak. They considered us outsiders. We saw small boys sitting and gambling with a group of four-five men. We also found drunk men who beat their wives every night,” remarks Ravi, the president of Hope Welfare Trust.

The members of Hope Welfare Trust, which by this time had grown, spoke to these women when their husbands were not around. The team members would gather all the women and talk to them about the importance of education. Slowly, but steadily, these women learnt to write their names, opened bank accounts, and began standing up for themselves. Later, the team even trained them in self-defence.

We decided to fight it

The leader of the Green Gang, Asha Devi, speaks about how, earlier, the men in the village would waste their meagre earnings on alcohol and gambling and ignore farming. She says, “In this, the women would suffer as they had to bear the burden of the domestic violence. Therefore, we decided to stand against it and fight. Today, the scenario is such that the men don't even dare to sit under a tree and gamble.”

Started with 10 members, the group is now made up of 30 women, all of whom are desirous of bringing about a change Also known as ‘Police Mitra’ by the UP Police, they keep an eye out for any kind of criminal activity. This, Asha says, has given the movement an immense amount of power.

Working vigorously for the upliftment of the marginalised, they are working in six other villages in Varanasi district and to form green gang there also. “We have started working to form Green Gangs Naxal-affected villages of Mirzapur district," says Asha.

"We have also identified seven villages in eastern UP that have very high potential for village tourism. We have sent details about this to the tourism ministry and are working on how to promote it,” says Divyanshu.

These women are not only advocating for an alcohol-free society but also pushing for other positive changes by working on cleanliness, healthcare, education, voters’ awareness, and developing infrastructure.

These women, who were once afraid to step out of their homes, credit Divyanshu and the group for the transformation. As Asha says, “The students have worked closely with us — without their support, we wouldn't be here.”