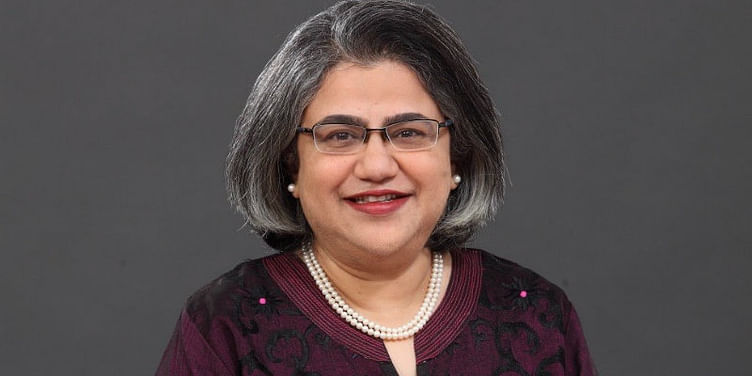 After spending 21 years in Crisil, Roopa Kudva is now leading Omidyar Network’s overall investment strategy, operations and portfolio development as Partner and Managing Director, with an aim to contribute to a larger societal impact.

Roopa Kudva had already spent 21 years in Crisil, seven of which as CEO, when she felt it was time to look at a new phase and do something completely different.

“I had no clear idea about ‘what next’, but was fortunate that an opportunity at Omidyar Network came along. It offered me a unique platform to use my skills to contribute to a larger societal impact,” she says of the radical shift in her career.

Roopa was raised in Assam where she completed her schooling and college education before moving to Ahmedabad for an MBA in IIM. Her first job was with IDBI as a project lender where she worked for seven years, after which she joined Crisil, where she led its evolution from a leading Indian rating agency to a diversified global analytical company, with clients ranging from the largest investment banks of the world to tens of thousands of small businesses spread across India. Crisil’s market capitalisation grew over four-fold, from Rs 2,900 crore to Rs 14,000 crore, and revenues tripled.

On her stint at Crisil, Roopa says, “I was fortunate to join Crisil at a very early stage, and as the company grew and thrived, so did my career. During my initial years in Crisil, it was a startup environment, where we were trying to introduce a new concept of credit ratings to bring transparency to financial markets. As an analyst, Crisil provided me rich exposure to a wide range of industries. Further into my career, I learned how to build businesses, both within and outside India. In 2005 we added a new business line – global analytical offshoring which went on to become bigger than the credit rating business.”

At Omidyar, Roopa leads the overall investment strategy, operations and portfolio development in India as Partner and Managing Director. “Our focus in the last two years has been on building out the investment team and expanding our presence in India. We have made some interesting new investments in platforms and solutions for the ‘next half billion’ – including local language-based businesses, digital finance solutions for underserved populations and entrepreneurs providing a range of utilitarian products and services for the lower middle class. We have also set up a new initiative - Digital Identity, and funded Digital Identity Research Institute at the Indian School of Business,” she informs.

Omidyar Network recently released a report, Innovating for the Next Half Billion in India. Based on insights from 10 years of funding purpose-driven entrepreneurs in India, the report details how innovators across the country can serve the next 500 million mobile internet users expected to come online in the next five years. The report also underlines the fact that women are reticent when it comes to using the internet.

Roopa believes, “A large segment of this population believes that smartphones would make women susceptible to online harassment or ‘bad influences’. While this negative connotation often deters men from buying smartphones for the women in their family, women themselves discourage themselves from using smartphones with the fear that they’ll stumble upon inappropriate content online. Our report identifies women as a key consumer segment in the Next Half Billion, however, there is a glaring gender divide in smartphone ownership across the geography that needs to be addressed. Women are 36 percent less likely to own a mobile phone and comprise only 35 percent of mobile internet users and 25 percent of Facebook users. The challenge is to reposition the existing usage of mobile internet towards more socially acceptable cases, such as health and education, to encourage greater participation by women in the internet space. “

Women and the workplace

In an innovation and technology-driven industry, female entrepreneurship has massive potential to flourish, states Roopa. “Technology’s power and scope are presenting a wide range of economic and social opportunities to women entrepreneurs, putting them in a position to create value and lead change through sustainable and successful businesses.”

But despite the tremendous strides women have made in the workplace in the last two decades, Roopa believes one of the biggest barriers that women have to deal with is self-belief in doing the top jobs, adding that women still hesitate to ask for a seat at the table.

Working in a favourable ecosystem

The future looks optimistic as Omidyar believes that India’s time is now. “The ecosystem for entrepreneurs is favourable – entrepreneurship attracts top talent and significant funding. Government policies are supportive of entrepreneurship. And the several large digital and technology enablers are in place – digital identity, smartphone penetration, bank account penetration etc. We look forward to supporting purpose-driven entrepreneurs who are focussed on providing products and services to low and lower-middle income Indians, a population segment that has been traditionally excluded, underserved and disempowered,” she says, signing off.