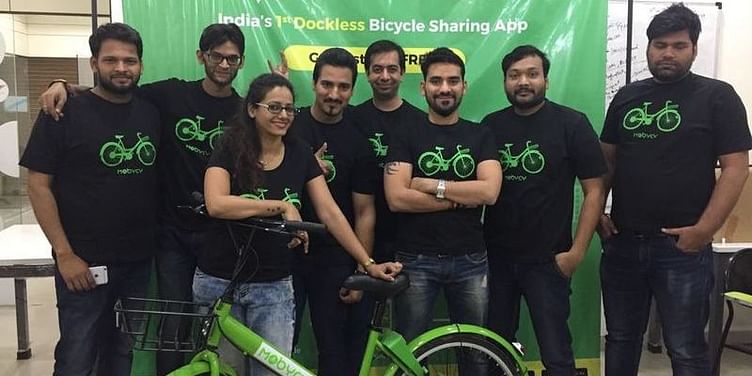 Delhi-based Mobycy allows one to rent a bicycle by the hour, which can be parked anywhere for others to pick up and use

Where it is based: Delhi NCR

On average, it takes anywhere between one and two hours to get from Point A to Point B in Bengaluru, and growing traffic woes have made any commute difficult. This, however, isn’t just the case of Bengaluru but pretty much every city in India.

While public modes of transport are operational in most cities, last mile connectivity remains a challenge. Easy transport is also an issue in many college campuses, especially the old ones that are spread over acres and acres of land.

It was while lecturing at a college in Delhi that MobiKwik’s then Vice-President Akash Gupta saw this as a problem. He realised college students often spent hours walking between the various academic blocks for classes, and to the hostel or the main gate. This was when he came up with the idea of Mobycy, which works as an ‘Uber’ for bicycles.

Mobycy allows one to rent a bicycle by the hour, and it can be parked anywhere for others to pick up and use once the destination has been reached.

“From there, I extended the idea to Indian cities where the problem is similar, and larger, with regards to troublesome short-mile connectivity, rising levels of pollution, and traffic congestion on the roads,” says Akash.

In addition to solving the short-mile connectivity conundrum, Mobycy endeavours to curb the growing menace of pollution, and traffic congestion.

Mobycy bikes are dockless and easily available across popular haunts and public places like Delhi metro stations, North and South Campus of the Delhi University, and the Huda City Center. In order to discover a bike in the vicinity, users need to download the Mobycy app, which is available on Google Play and the App store.

Once booked, a bicycle can be unlocked by scanning the digital QR code, and upon completion of a ride, the cycles can be parked anywhere in public pavements, except inside private compounds or gated colonies. The dockless bicycle sharing app has a smart GPRS tracking device installed to prevent thefts.

Setting up an organisation comes with its own challenges. Personally, for Akash, giving up a comfortable job was a challenge in itself. Apart from that, building the technology, seeking government permissions, and attempting to change consumer behaviour was also a challenge.

Furthermore, setting up the right team didn’t come easily. Since it was a little-known concept, several candidates were interviewed, but few chose to join.

“We commenced operations with 5,000 smart bikes fitted with IoT locks and GPS tracking. We have a talented team on-board, and hope to traverse into 12 metropolitan cities and multiple colleges and universities by the next six months,” says Akash.

While Akash heads the technology aspect of business, co-founder Rashi Agarwal runs operations. Rashi was initially associated with S&P Capital IQ as a Senior Research Associate for over seven years. She is also the founder of a fashion startup. Apart from Akash and Rashi, the core team comprises of Vivek, who was running a technology company in Hyderabad. Mobycy has a team of 14.

The current revenue model is shared between rides, partnership and advertising. Mobycy’s model makes dockless bicycling cheap at about Rs 1 per hour, or less. Besides, with a monthly plan, commuters can pay Rs 99 for two rides of an hour each per day. Users have to sign up using their Aadhaar identification and pay a security deposit of Rs 999, which is refundable. For students, the security deposit is Rs 499, and they can sign up using their college photo identification.

Within three days of launch, the team claims to have had over 1,000 downloads of the Mobycy app. Akash adds that a majority of users paid the security deposits indicating they signed up for the subscription plan.

“As per our projections, we will start making money within the first three months. The projections for our yearly revenues are at $180 million over next 12 months which will positively grow 5X over next 24 months,” explains Akash.

Bike sharing is a hot trend. Earlier this year, Ofo entered the US market with 1,000 bicycles in Seattle. New York’s Citi Bike, with 10,000 bikes and 236,000 subscribers, is the largest player in the US. Beijing has 700,000 shared bikes, and 11 million registered users, nearly half the capital’s population. Investors believe that with inexpensive rides, and the success in the Chinese market, the models can be easily replicated in India.

Mobycy raised seed investment of $500,000 from an angel investor in the US. Speaking of its future plans, Akash says,

“In the coming six months, we envision to grow our presence across 12 new metropolitan cities in India. It is our aim to establish a prominent presence in these cities and cover significant touch-points such as popular haunts, bus stations, markets, public transport channels, colleges and institutions. We are further looking to expand the team, make our tech stronger by adding first of its kind tech features basis consumer demand and also launch newer versions of our cycles in near future. While we have commenced operations with 5,000 bicycles, we’d also be increasing the number to 50,000 by the next six months.”