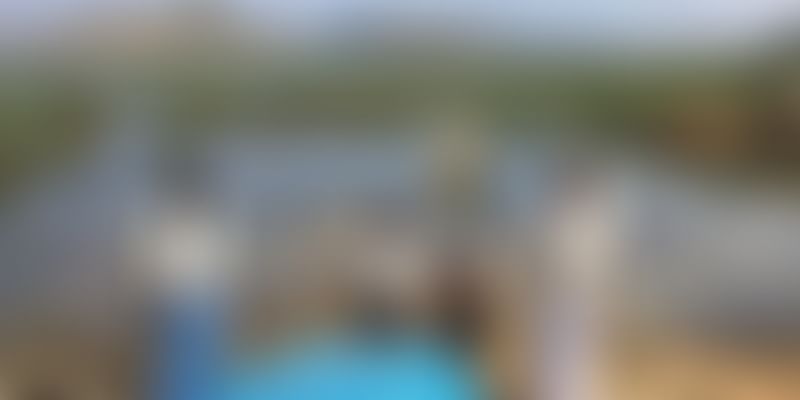 We speak to migrant fishermen in the villages around Bengaluru who eat, sleep, live and fish by the lakesides for a living.

It was a sunny afternoon, and I was exploring the many old reservoirs surrounding Bengaluru. Even as I was nearing the ancient Srinivasa Sagara dam in Chikaballapur distrcit, I could identify from a distance plastic coracles docked next to makeshift tents.

When I spotted similar kuccha shelters on the banks of a lake near Manchenalli, my curiosity got the better of me, and I decided to speak to the fishermen who were camped outside these huts. As I introduced myself, I noticed two young children, standing in knee deep water trying to catch fish using a worn out saree.

From inside one of the shabby huts, 55-year old Rangappa greets me, as his daughter rolls out a charpai.

Rangappa is among the 20 odd people (six families) who live by this lakeside and fish to earn a livelihood.

Fishermen on the move

I ask him what forced him to migrate from Rangavanahalli in Chitradurga district, he cynically replies, as if resigned to his fate: “This is what we do every year.”

Born into a family of five brothers, Rangappa did not inherit enough fertile land to cultivate crops.

I just have a half-acre plot. It cannot meet the needs of my six- member family. Moreover, there is no water, he complains.

It’s been over two months since Ranagappa and his family moved to the lake bank in a hired tempo. Sixty-five-year-old Basavaraju and his family also followed him, migrating from their village in Sira taluk of Tumkur district.

My grandfather also migrated to lake banks for fishing, so did my father, and now I’m doing the same. We have been doing this for generations since we do not belong to land holding communities. For us hunting fish is life and we migrate to do this every year, says Basavaraju.

Fishermen like Rangappa and Basvaraju are among the many circular migrants in Karnataka who migrate seasonally (every year from October-March) to earn a living. Basavaraju informs me, that in his village alone, over 60 families migrate every year and live next to dams, ponds, and reservoirs.

The scale he mentions is startling though I’m aware of the level of internal migration in the fisheries sector. Many migrant labourers from neighbouring Tamil Nadu and Andhra Pradesh move to work in the coastal villages of Dakshina Kannada. Studies suggest that Karnataka also sends a massive labour force who temporarily relocate to Kerala to work in the marine fisheries sector.

So, how different are these marginalised internal migrants who migrate in lesser known patterns? What are the difficulties they face?

Basavaraju’s work starts at 5am when he has a tough task of lifting the heavy nets and sorting the fresh catch.

We lower the nets at 5pm and take them out again early morning. Usually two people go out in the coracle, while one rows with the oars, the other pulls out the heavy nets.

If the catch is more, there are chances the person drawing the nets gets pulled into the waters. Often speedy winds and heavy rains also cause the boats to capsize.

The plastic ones are feeble, compared to the traditional ones made of wood, says Basavaraju.

On a typical day, these migrant fishermen catch a variety of fish ranging from katla, raghu, grass carp, mrigal carp, jalebi, etc and sell them for Rs 100 per kg. Their catch ranges from 20-100 kgs depending on seasons and location of the lake, with a good month promising about 100 kgs a month. While the monsoon assures better prospects, winter yields are bleak.

Of organised networks and families dependent on fishing

When asked how they come to know of fishing opportunities next to particular lakes, Basvaraju explains of an organised network in a very casual manner.

The system works through tenders. Once owners bid and receive tenders to fish in certain lakes, they get in touch with middlemen who inform and hire us on commission.

These lake-dependent families ensure that all the women and children learn swimming and fishing skills quite early. Ten-year-old Chinna accompanies his grandfather Basvaraju on the coracle every morning. “His school time begins only after he has helped us with our first catch,” shares Basavaraju.

Even teenage girls and married women help in rowing the coracles and sorting fish. When I ask young Geetha if she faces any difficulty while fishing, she smiles back.

Gangamma, Rangappa’s wife grumbles throughout and asks if I can help her husband get a decent job in the city. When questioned why he needs one, she dejectedly says,

Our lives are all about fishing, cooking, eating and sleeping, she summarises even as she continues to winnow the rice.

“We can hardly think beyond this routine. On worse days, we have to cover ourselves under the coracle for protection from the rain and cold,” she adds.

Life of labour on the shorelines

It’s been more than four decades since Rangappa began migrating to fish on the shorelines of various lakes across Karnataka, Andhra Pradesh, and Tamil Nadu.

Being extremely adaptable is the only choice for these fishermen who build their own tents and carry their boats everywhere they go.

They rely on the nearest Primary Health Centres (PHC’s) in case of medical emergencies, with the most prevalent health issue being cases of malaria.

Basavaraju is keen on ensuring continuous education to his grandson Chinna.

I will not discontinue his studies in any case. I want him to study well and escape the drudgery of having to depend on fishing for a living.

Fluent in both Telugu and Kannada, Basavaraju says he manages to visit his relatives in the village every month.

We are forever dependent on lakes and fish for our livelihood. We manage to make only minimal savings, that too during the monsoons. We are tired of this nomadic life spent on shorelines, he says disappointedly.

“In cases of financial emergency, we borrow from the ‘kere owner’ (lake owners who hold the tender to carry out fishing) and return it with interests,” adds Rangappa.

Our trade is wild and tough. Only ‘buddhivantaru’ (smart ones) survive to fish another day, he concludes.