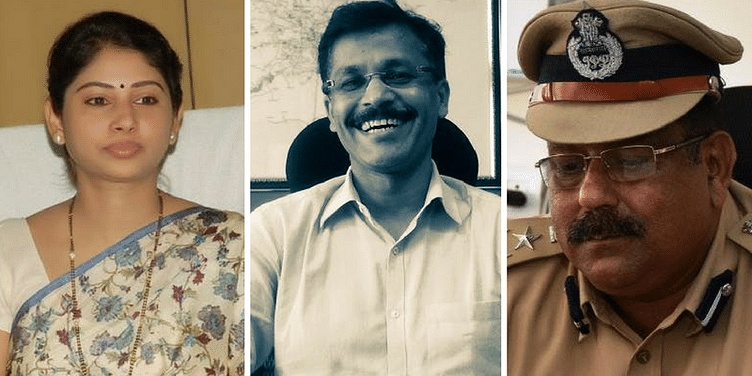 From taking actions against land, water and sand mafia to constructing a 100-km road through crowdsourcing, and making public infrastructure available for the disabled, these civil servants have created a spiral of change in India.

The Indian civil services are said to be the dream job for the youth. The numbers back this up - over 10 lakhs aspirants appeared for the UPSC civil services examination in 2017 alone.

The reasons, according to a survey carried out by Assocham, remains that the civil services provide multiple visible and invisible perks. These include social status and 100 per cent job security, and also a chance to work for society.

The civil services carry forward the will of the Parliament and the legislations, as passed by the Cabinet. They not only help the government in formulating and implementing policies, but many of them go beyond their call of duty and are part of various measures to reform society and provide livelihoods.

We take a closer look at 10 of the most inspiring individuals in the civil services:

Tukaram Mundhe, an Indian Administrative Services (IAS) officer, has been handed nine transfers in 12 years of his service because of his uprightness and devotion to duty. A 2005 batch IAS officer, he is now the CMD of Pune Mahanagar Parivahan Mahamandal Limited (PMPML).

From raiding an illegal bar to the demolition of unauthorised encroachment and acting strongly against land and water mafias, Mundhe has done it all. He even received death threats for acting against the sand mafia, and came close to being demoted for displeasing his political bosses.

Popularly known as Miracle Man in Manipur, IAS officer Armstrong Pame’s first claim to fame was when he got a 100-km stretch of road constructed in the state in 2012. Without any help from the government.

In the remote areas of Manipur, the two villages of Tusem and Tamenglong were inaccessible because there were no roads. Connectivity to the two villages was a huge problem and locals had to either walk for hours, or swim across the river.

Today, the 100-km road is known as the People’s Road, and the entire credit for its construction goes to Armstrong. The road also connects Manipur with the states of Assam and Nagaland.

One of his recent initiatives includes a weekly dinner invitation to 10 students, from Class 5 to fifth to 10, to give them a glimpse into the life of an IAS officer.

In 2012, Armstrong was nominated for the CNN-IBN Indian of the Year Award in the Public Service Category. He was conferred with India’s Most Eminent IAS Officer Award in 2015.

Thirty-nine-year-old IAS officer Ritu Maheshwari came to know about ongoing electricity theft in Kanpur while she was posted in Uttar Pradesh.

In Uttar Pradesh, although 99 percent of villages are electrified, only 60 percent of houses get electricity. The economy takes a huge hit because of the rate at which electricity is pilfered. Working at Kanpur Electricity Supply Company Ltd (KESCo), she is taking measures to reduce the company's losses by digitising power to curtail electricity theft.

After taking charge as an official at KESCo in 2011, she installed new meters across one-third of the company's customer base. These devices can digitally record the consumption of electricity and expose leaks in the distribution system in real time.

She says, “People thought I could be fooled or manipulated because what would a woman know about electricity and complex grids? I managed to change 1,60,000 meters of the 5,00,000 amid protests from pilfering consumers. This drastically brought down the city's distribution losses, which were at 30 percent then.”

Since she started, the company’s losses have dropped from 30 percent to 15 percent.

DC Rajappa, a firm believer in community-friendly policing, is a celebrated name among Karnataka’s law enforcers. He is also a renowned Kannada poet, and believes that empathy is the guiding force for both poets and policemen. He encourages policemen to write poems out of their personal experiences, and has brought out the hidden poet in 500 policemen in Karnataka.

Rajappa is a firm believer of community-friendly policing, where policemen understand and connect with people’s problems better, looking beyond their routine duties. “Policing is looked upon as a stern profession with no place for emotion. But, that’s not absolutely correct. I believe in policing with a human touch,” he tells us.

To bring out the literary talent and poetic sensibilities among the men and women in uniforms, Rajappa has edited four editions of anthologies containing poems written by policemen of all ranks - from constables to inspector generals.

Over his 28 years of police service, Rajappa has worked across Karnataka. He has served as a police officer in Bidar, Sagar, Mangaluru, Gulbarga, Shimoga, Bellary, Bijapur, and Bengaluru in different postings, including in Railways, CID and as DCP West.

At the age of 42 years, P Narahari has over 40 awards to his credit for making Indian infrastructure accessible to the disabled and working on open defection-free initiatives.

During his 10-year stint as a district collector in various districts across Madhya Pradesh, he constructed and advocated for a barrier-free environment that ensures that people with disabilities can move about safely and independently.

“We have building codes that specify what kind of infrastructure needs to be created to ensure that there is a barrier-free environment. We call organisations, especially government agencies, whom we train and educate about the specifications. For example, railway and bus stations frequented by the public for their day-to-day activities need to be disabled-friendly,” he adds.

An officer of the 2001 batch, Narahari was posted in Seoni, Singrauli, Gwalior, and Indore as a DC and a district magistrate, and currently holds the position of Secretary (Revenue) in the Madhya Pradesh Government.

The Telangana Chief Minister's Office recently made history by appointing IAS officer Smita Sabharwal as the additional secretary. She is the youngest officer to take up this responsibility at a CM's office.

It has been 15 years since she joined the service, and she is popularly known as “the people’s officer”.

When she was appointed the Nagar Panchayat Commissioner in Warangal, she launched a campaign called “Fund Your City”, appealing to residents to help her build the infrastructure of Naxal-affected areas, which resulted in the construction of traffic junctions and foot over-bridges.

After her work in Warangal, she was appointed the DM in Karimnagar, where she worked for the improvement of the health and education department. She also ran a campaign to bring female patients, who generally hesitated to seek help, to government hospitals.

Realising the importance of educating children for a bright future for the country, this IPS officer takes time off from his duty to work towards improving the state of education.

Hailing from Patna, Santosh Kumar Mishra is an IPS officer from the 2012 batch. He is posted at Uttar Pradesh’s Ambedkar Nagar district.

When he was posted in Amroha district, a student from Class 5 once complained about his friend not coming to school for the past 15 days. Looking at the child’s worried face, Santosh decided to investigate and realised that the boy had started helping out with his father’s sweet business. Santosh then talked to the father, and ensured that the child started going to school again. This inspired him to start doing his own bit to improve the state of education in India.

When Santosh was posted in Ambedkar Nagar district, he went to a primary school to teach children. These young students demanded jalebi first, and he complied. He also provided school bags to these kids, and then began teaching them Math.

It all began 15 months ago when she carried out a raid on a famous food brand, with reports revealing that the products contained very high quantities of impermissible substances. After the raid, this product was banned.

Following this, many more raids were carried out; they revealed that the pesticide content in some fruits and vegetables was about 300 percent more than the permissible limit. Over the course of her stint, she has seized and produced about 6,000 samples of adulterated food in front of the court. Around 750 cases have been filed in the court against traders.

Snehlata Shrivastava, a 1982-batch retired IAS officer of the Madhya Pradesh cadre, was appointed the first female Secretary General of the Lok Sabha, earlier in November 2017. The appointment was made by Lok Sabha Speaker Sumitra Mahajan. She replaced Anoop Mishra.

Shrivastava, a senior civil servant with 35 years of rich and varied administrative experience, will have the rank and status of cabinet secretary.

Aparajita Rai was eight years old when her father, who was a divisional forest officer in Sikkim, passed away. At that tender age, she understood how insensitive most government officials were towards the public. It was then that she decided to become a part of the system and do her share to bring in change. Fast forward two decades and she is now the first female IPS officer from Sikkim.

During her training, she won several awards, including the 1958 Batch IPS Officers' Trophy for the best Lady Outdoor Probationer, the 55th Batch of Senior Course Officers Trophy for Best Turn Out, and the Shri Umesh Chandra Trophy for Field Combat.

She says, “Anyone who comes to me should not face the same harassment or agony that people generally encounter in government offices.”