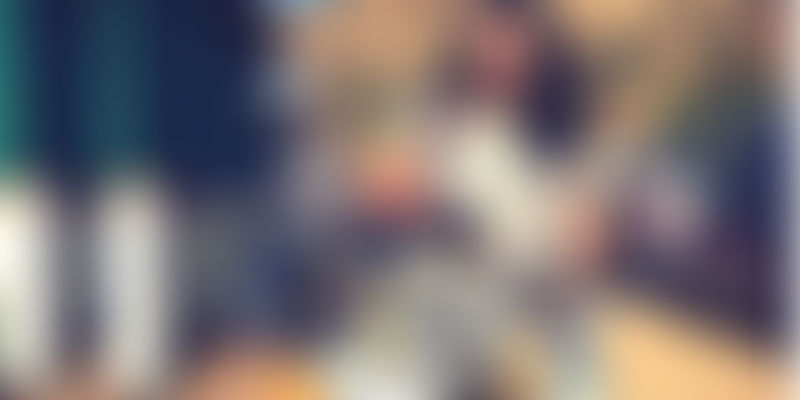 Run by women for women in UP's holy city of Mathura, Aatm Nirbhar is on a mission to build a nationwide women-driven community that employs women from marginalised families to help upskill other women.

“I have been travelling solo on my Royal Enfield Desert Storm for a couple of years. And still I never imagined that something as simple as riding a Scooty could have a life-changing impact on the life of a middle-aged homemaker,” says Pawani Khandelwal, Founder of Aatm Nirbhar.

Aatm Nirbhar is a social venture that was started in 2017 by 23-year old Pawani Khandelwal. The platform aims to build a nationwide women-driven community to empower women. It is currently operating in the form of two-wheeler driving schools enabled by female trainers in Mathura, Bharatpur, and Jaipur.

To understand the kind of challenges Aatm Nirbhar faced while setting up, Pawani says one has to imagine a small-town setting, where even switching from a saree to a salwar suit is a revolution in itself for a woman. In such an environment, creating a brand for women that they (and especially their husbands and families) can completely trust with their safety and their reputation was the biggest challenge the venture dealt with.

To hit the ground running, Pawani returned to her home town from Pune to launch the venture and started forming a team of city managers and trainers (all women) who shared the same vision. An extensive training programme was conducted to ensure that everyone was on the same page about the benchmark of training quality the platform aimed to deliver.

“During this process some candidates did back out because though the job may sound easy, it requires a plethora of responsibility. Gradually the team size grew as we expanded to Bharatpur and Jaipur; today the team size is 18 and counting,” she adds.

When Pawani’s mother wanted to learn to ride a two-wheeler in Mathura, they came across a dearth of women trainers. It also made Pawani realise that every household had at least one woman who had a deep urge to learn how ride a Scooty.

“Today my mom happily rides in Mathura ki galiyaan and if you ask her today about her experience, these will be her exact words: ‘It’s been such a long time since I have been riding a Scooty, and yet every time I start it, I get the feeling that someone has given me wings’,” Pawani says.

Pawani started her Aatm Nirbhar journey while she was in Pune and did a pilot test by creating a Facebook page. The idea was a hit and she soon received enquiries overnight from Mathura; she had advance registrations before onboarding a single trainer. After this it didn’t take much time for Pawani to pack her bags and move back to Mathura to turn the Facebook page into a reality.

She has done her BBA from Symbiosis University, Pune. Pawani highlights that she discovered her passion for social welfare when she was in Class 7. Back then, she started an NGO Kartavya during her summer vacations with a bunch of friends to educate poor children at her farmhouse, and continued with the noble cause for four years. However, she kick-started her entrepreneurial journey in her first year of graduation when she co-founded a fitness startup, Fitato.

Pawani highlights that her mother has been her greatest inspiration to help other women. So when the idea cropped up, the homemaker couldn’t hold back herself back and joined Aatm Nirbhar as the CEO.

Today, the Aatm Nirbhar team comprises of women aged between 16 and 48 years of age. For many team members, including Pawani’s mother, this is their first job. The platform claims that majority of its trainers come from financially deprived families and the job helps them contribute up to 50 percent to their family income.

“From Susheela, who used to do household chores for Rs 500 a month before joining Aatm Nirbhar to Snehlata who is a constable and works at Aatm Nirbhar ppart-timebecause she wants to see more women taking a road like herself, each one of my trainers has a different story to tell,” Pawani says.

Pawani highlights that Aatm Nirbhar’s 10-day driving course is designed to teach women who have never even ridden a bicycle.

“Our students have the flexibility to choose a time slot from 6 am to 8 pm, according to their convenience and they are provided with a pickup and drop facility by a woman trainer. Before every training session, there is a theory class on road signs, first aid, traffic rules, and vehicle maintenance,” says a trainer at Aatm Nirbhar.

Aatm Nirbhar started as a bootstrapped venture with a very minimal capital investment and it didn’t take much time after launch for the platform to break even. Today, Pawani claims that all expenditures are recovered from the revenues itself.

Being a service company, Aatm Nirbhar is monetising via the service of two-wheeler driving training.

For a 10-day training session, the platform charges an average fee of Rs 2,000, depending on whether the student has a vehicle available or would use Aatm Nirbhar’s vehicle for training.

So far, the platform has generated revenue of Rs 6.1 lakh. Pawani highlights that the number of trainings and revenue has been increasing at a rate of 25 percent month-on-month per city.

“As per the revenue forecast for the next six months, not only are we not looking for a funding, but our revenue will help us market us extensively and expand to more cities,” she says.

This Women's Day, the platform is organising a summit for women entrepreneurs in Mathura as a start to creating an ecosystem for businesswomen in Tier II and III cities of India, starting from Mathura. In April 2018, Aatm Nirbhar plans to organise driving camps in various Tier III and IV cities of Uttar Pradesh and Rajasthan.

“We will also look at exploring the franchising model to expand to more cities,” Pawani says.